Smog hangs over the city on a day rated as having 'moderate' air quality in downtown Los Angeles.
Photographer: Mario Tama/Getty Images

Outdated emissions limits, regional underfunding, and the exclusion of long-suffering communities has left more than 150 million Americans still living under unhealthy levels of pollution, and groups are calling on President to fill the gaps by prioritizing air quality standards.

“The administration is going to need to take a number of U-turns before it engages the gears to move forward,” Ann Weeks, senior counsel and legal director of the advocacy group Clean Air Task Force, said at an expert panel this month.

That kept a status quo of emission limits that experts and scientists said were too low to begin with. 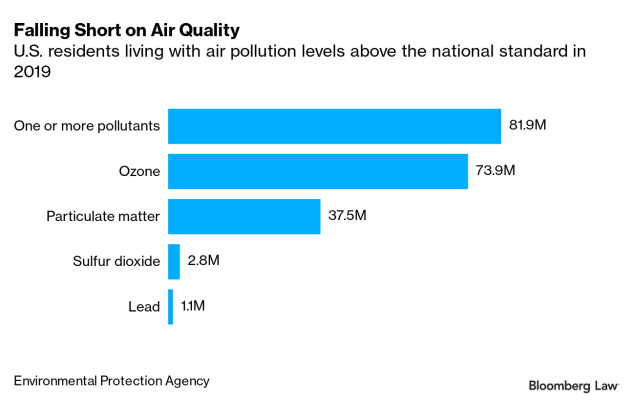 But it’s not clear yet how the work on clean air will proceed. Biden’s pick to lead the EPA, Michael Regan, is still moving through the Senate confirmation process.

The agency is already “hard at work” carrying out the president’s environmental goals, Joseph Goffman said in his first public appearance as acting assistant administrator of the EPA’s office of air and radiation.

“What the agency, through its staff, is committed on delivering is not just an item by item conducting of individual rules, but an integrated outcome for the public,” Goffman said last week at the clean air webinar with Mirzakhalili and Weeks.

“If the Biden administration is really going to make good on its promise to consider the environmental justice implications of everything that is done in the Clean Air Act space, they really do need to be focused on these National Ambient Air Quality Standards as a first step,” she said in an interview with Bloomberg Law.

Those standards, known as NAAQS, are the cornerstone of air pollution law under the Clean Air Act, but enacting those protections is a slow process complicated by various moving parts and enforcement issues.

Standards are set and implemented over a matter of years, Weeks said.

“It’s not like you snap your fingers and immediately pollution levels go down,” she said.

“I think it’s probably time to think outside the box,” she said. “What we’ve done historically maybe isn’t the right strategy to really combat this problem.”

Even zones on the edge of pollution compliance are in a constant tug of war.

For some counties on the cusp of “attainment” of national air standards, changing weather and cross-state air pollution will force them to “pop in and out” of attainment for different NAAQS year to year, said Paul Miller, executive director of Northeast States for Coordinated Air Use Management, a nonprofit association of air quality agencies.

Upwind pollution from industrial facilities outside of the northeast, Miller added, wreck the air in downwind states such as New York and Connecticut that have “no control” over the emissions getting pumped in.

Biden has until next month to issue a final rule on the cross-state air pollution issue.

“If there aren’t any other major emission reduction programs to keep pushing things, you’re going to be on the cusp for a long time,” Miller noted. “During the Trump years, we didn’t get any other major programs.”

But Zach Barber, a clean air advocate at Penn Environment, isn’t ready to hail the achievement as sustainable without more robust health-based standards and caps on industrial facilities.

“Even if we do end up meeting the current standard as the health department has said that they think we will, we know that means that we’re still not meeting the health protective limit,” Barber said.

Biden should get creative moving forward with air regulations, rather than slapping more restrictions on industries that are already heavily regulated, said Dorsey and Witney’s Houdeshel. She also suggested targeting “low hanging fruit” emissions sources, such as old boilers in schools, that aren’t regulated.

Revising clean air rules is a cornerstone of climate and justice policies, two areas that the Biden administration has set as priorities.

Portable air quality monitors used in the South Bronx and Brooklyn caught particulate matter quantities 20 times higher in some areas than levels reported by state-run monitors, according to new data from a neighborhood-level air monitoring study by the New York City Environmental Justice Alliance, or NYC-EJA.

The findings highlight insufficient air monitoring for targeted environmental justice communities, and show why one generalized air policy may not be enough to mitigate pollution for hard-hit areas, said Jalisa Gilmore, research analyst for NYC-EJA.

“That’s why we have a little bit more emphasis on hyper local monitoring, and making sure that we actually get the interventions that are most appropriate for the community,” she said.

There should be institutionalized safeguards for fenceline communities that may already be suffering directly from nearby pollution sources.

“It doesn’t make sense from a health perspective to look at a facility independently of the context and the conditions in which that facility will be placed,” Nelson said.

Excessive heat from ever-hotter summers put “a lid on the pot” in areas like Bronx and Queens counties that are in nonattainment for ozone pollution, which is created when chemicals develop a toxic airborne mix in the sun, said NYC-EJA executive director Eddie Bautista.

Bautista and other advocates have high hopes for the administration that’s made unprecedented early announcements on the environment, but they will be watching as agencies ramp up policy efforts.

“It’s serious and it’s not that far off into the future where we can spend a lot of time just twiddling our thumbs or doing incremental stuff,” Bautista said.