President Joe Biden signs H.R. 3684, the Infrastructure Investment and Jobs Act, during a ceremony on the South Lawn of the White House on Nov. 15, 2021.
Photographer: Stefani Reynolds/Bloomberg

Biden signed the long-awaited infrastructure bill () into law Monday. Delivering on sustainability and equity goals will largely be left up to Biden officials and the Transportation Department, a unique opportunity for the administration to put its mark on a surge of money.

Biden also signed an executive order Monday to create an Infrastructure Implementation Task Force with Mitch Landrieu, who will serve as White House infrastructure implementation coordinator, as a co-chair. Transportation Secretary Pete Buttigieg will also sit on the task force, which will prioritize goals of spending the money equitably and building resilient infrastructure. 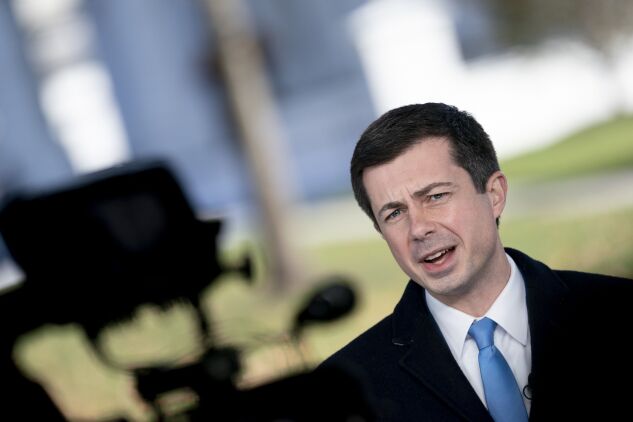 “We will also ensure these major investments achieve the President’s goals of combating climate change and advancing equity,” Landrieu, who previously served as New Orleans mayor and launched the E Pluribus Unum Fund in 2018, which focuses on race and equity, said in a statement.

Advocates say additional language in the Democrats’ social spending package (), scheduled to get a House vote this week, would solidify the climate and social justice goals Biden has touted as part of the infrastructure bill. The Transportation Department and states have a lot of leeway in the newly minted law, and they say the social spending measure would offer more incentives for environment- and social justice-friendly policies.

Transportation for America Director Beth Osborne said the transportation part of the infrastructure bill spends a lot but “fails to target it to the needs of the day,” including equitable access and climate change. The group has criticized the bill for doubling down on the same types of programs with high spending on highways and roads and not enough to alternative forms of transportation.

“The administration is confident they can make substantial progress on all of these goals despite those deficiencies,” Osborne said after the infrastructure bill was passed. “To make that happen, both the administration and the states will need to make major changes to how they approach transportation, but we know they can do it.”

Advocates have in the past criticized state projects to expand roads and freeways rather than repairing existing ones. The Federal Highway Administration paused a highway project in Houston this year that some say would hurt communities of color.

Biden kept his tone upbeat Monday at the signing ceremony. “Too often in Washington—the reason we don’t get things done—is because we insist on getting everything we want,” Biden said. “With this law, we focused on getting things done.” 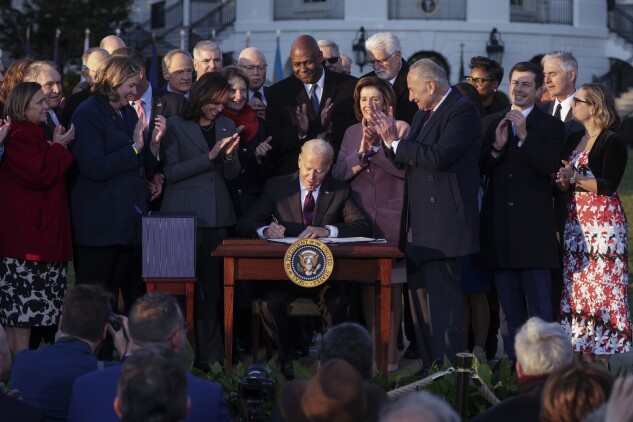 President Joe Biden signs the infrastructure bill on Nov. 15, 2021, as he is surrounded by lawmakers and members of his Cabinet during a ceremony on the South Lawn of the White House.
(Photo by Alex Wong/Getty Images)

The Transportation Department plans to hire additional staff to help implement the law, while using grant program criteria and hosting sessions to help states and localities apply for funds.

Deputy Transportation Secretary Polly Trottenberg said the department has already added climate and equity criteria into existing discretionary grant programs. That way they can ensure funds for discretionary programs go to their objectives.

For example, the Federal Transit Administration listed climate, equity, and modernization among priorities for the law’s public transportation funding in a Monday news release.

“You see the kinds of projects we’re picking, we are focusing on the administration stated priorities of equity, of environmental sustainability, of job creation, of safety, and an emphasis where we can on fix-it first, on making sure that we’re looking at fixing existing infrastructure before we add new capacity,” Trottenberg told reporters last week. “This is, I think, a transformational moment in American transportation. We’re an administration that is focused on tackling climate change and equity in a way that I’ve never seen before.”

It will likely be more difficult to get some states on board with prioritizing climate and equity as a significant amount of funding is distributed through existing formulas. Former Transportation Secretary Anthony Foxx, who served in the Obama administration and focused on equity during his time at the department, said states have a lot of control over how they build roads and bridges.

Foxx said Congress could impose more clarity on equity and climate goals through performance standards. “It’s quite a challenge,” he said. “While a lot of new money is going to come into the system, we haven’t done major surgery on the distribution of that money.”

A “dirty little secret of transportation is that states basically have been able to do what they want,” he added.

In some places, road expansion and other “new capacity” projects are under consideration, but Trottenberg said “there is a growing consensus that we need to focus on creating a system that is emitting less carbon, doing more to foster equity.”

The department is working closely with other agencies as they implement the infrastructure bill, including its administration-wide goal that at least 40% of the overall benefits from federal spending in climate and clean energy go to disadvantaged communities.

Coes told reporters last week the department had started hosting stakeholder and technical assistance programs. “It’s not just what the dollar amount is, but it’s also making sure we can change culture,” he said.

“I believe that he can help promote the major objectives of both making the country more efficient, bringing our infrastructure up to date, and reducing our carbon footprint,” DeFazio told reporters last week. “We really haven’t had time to sit down and say ‘OK, now let’s talk about implementation.’ But those are conversations we certainly will be having in the near future.”

Bapna said the legislation doesn’t “confront the climate crisis” and lawmakers need to pass Democrats’ spending package to help the administration achieve its goal of cutting greenhouse gases in half by 2030.

“We’re counting on the administration to uphold the commonsense safeguards ,” Bapna said in a statement Monday. “It’s essential that the bill’s highway investments go primarily to repair existing roads, not expansions that could worsen climate change or threaten vulnerable neighborhoods.”

To contact the editors responsible for this story: at fjohnson@bloombergindustry.com; at lduggan@bgov.com