“The future of vehicles is electric,” Biden said last week, touting how $7.5 billion from last year’s infrastructure law will put electric-vehicle charging stations across the US. “Finding a place to charge up your vehicle is going to be as easy as pulling into a gas station.”

But the infrastructure law () also requires funds to be spent on US-made products and materials in order to bolster domestic industry and labor. With inflation increasing the cost of domestic materials and domestic production still limited, some say the Buy America rules threaten to delay deployment and undermine the administration’s plan to install half a million chargers by 2030.

The Federal Highway Administration is tasked with picking between competing priorities as it decides whether to temporarily pause some Buy America restrictions, and for how long.

Labor groups and steel manufacturers are pushing for domestic sourcing rules to firmly be in place. But others, including some automakers and state officials, argue the proposed temporary waiver doesn’t go far enough: The US will continue to face supply chain shortfalls when the waiver phases out, they argue, challenging the Biden administration’s electric vehicle targets — and therefore its emissions goals.

Earlier: EV Chargers Are Hard to Find, and US May Ease ‘Buy-America’ Rule

Biden and top Transportation Department officials are counting on the electric-vehicle charger rollout to tackle pollution from transportation, the sector responsible for the largest share of the nation’s greenhouse gas emissions.

But even meeting the president’s half-million charger goal would fall far short of the 1.9 million public chargers needed for the US to be on pace to fulfill its promise of becoming carbon-neutral by 2050, according to a recent BloombergNEF analysis. 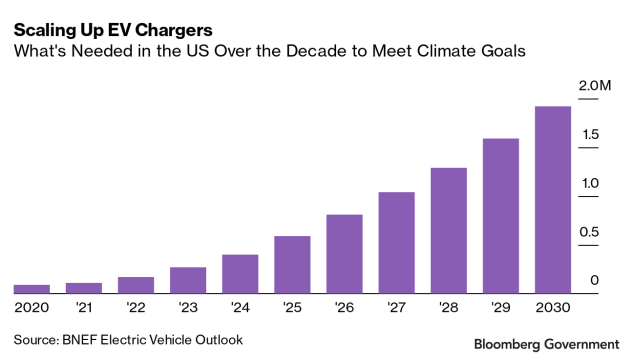 “Electrifying transportation is one way to have a very immediate and significant effect on reducing emissions; it’s not to say it can happen overnight, it’s going to be a process,” said Jessika Trancik, a professor at the Massachusetts Institute of Technology.

The Biden administration recently approved plans from all states and territories to start tapping into the $5 billion for EV charging in the infrastructure law. But state officials say they need clarity on the rules.

“A rushed transition to the new requirements will exacerbate delays and increase costs if EV charging equipment providers are forced to abruptly shift component sourcing to domestic suppliers, who in turn may struggle with availability due to limited quantities and high demand,” Shawn Wilson wrote to the administration on behalf of the American Association of State Highway and Transportation Officials.

Domestic manufacturers are concerned about their ability to meet growing demand, an agency spokesperson said.

The department in its waiver proposal said only three manufacturers — California-based ChargePoint Inc., FreeWire Technologies Inc., and Rhombus, recently acquired by BorgWarner Inc. — thought they had existing fast charger systems that comply with Buy America requirements as of last year, while other companies, including Tritium, could have them in the future.

Some companies are split over whether Buy America should be waived or allowed to go into effect.

Tritium, which asked the agency to cut the second phase of the waiver, said it expects to have capacity at its new factory to produce 6,000 units a year by the end this year, and 28,000 annually by the end of 2023.

FreeWire supports the waiver and asked for more flexibility, but William Kregel, vice president of government affairs at BorgWarner, told the agency the waiver would disadvantage manufacturers — such as Rhombus — that put money into meeting Buy America requirements.

White House officials touted how Buy America could improve supply chain security at a meeting this week on electric-vehicle cybersecurity, bolstering an argument made by manufacturers.

The Alliance for American Manufacturing told FHWA it be would “grave mistake if the United States were to become dependent on potentially hostile foreign governments for its electrical steel needs.”

Some lawmakers also want to make sure infrastructure dollars don’t benefit foreign competition, including Sen. Sherrod Brown (D-Ohio), who wrote to the administration about it earlier this year.

“Federal agencies should implement the new Buy America provisions as quickly as possible to give American companies the certainty they need to move forward with investments,” Brown said in a statement to Bloomberg Government.

Labor groups also want the Buy America rule to take effect, arguing it would help accelerate the US market and create manufacturing jobs.

“Clear, near-term timeframes, robust and transparent origin standards, and avoidance of loopholes will be critical to maintaining growth in the industry and speed of deployment,” Brad Markell, executive director at Industrial Union Council AFL-CIO, told the administration in comments on the proposal.

Some stakeholders, including those involved in building out the charging network, want the waiver’s deadline extended or stalled until it’s clear there is a competitive market. Automakers, including and , say the process of moving all supply chains to the US will take time, particularly at the scale needed to meet the surge in federal funding.

“We’re not looking to undermine the industrial policy that is embedded in the Buy American restrictions,” said David Fialkov, executive vice president of government affairs at NATSO. “We just don’t think that policy needs to necessarily undermine the macro climate policy that is undergirding this entire discussion.”

Agencies across the administration have proposed waivers on a variety of Buy America requirements in the infrastructure law, from construction materials to advanced transportation technology. Waiving further Buy America requirements, which have been criticized for increasing costs and red tape, could help the administration as it works to speed up the nation’s historically slow infrastructure processes.