The charging port of a Ford Motor Co. Mustang Mach-E electric vehicle during a presentation in Washington on July 28, 2021.
Photographer: Al Drago/Bloomberg

Some drivers of electric cars may be disappointed to learn they will have exit the highway if they rely on the Biden administration’s $5 billion for chargers. That’s because federal law limits commerce at interstate rest stops to vending machines, lottery tickets, and tourism promotion.

Officials announced plans Thursday to use money from the recent infrastructure law () to build out a national network of electric car chargers, largely along interstate highways, in order to accelerate adoption of the vehicles. But the infrastructure law didn’t change a 1956 restriction on commercial activity at rest stops. It’s an issue that has divided fuel retailers and electric vehicle advocates.

Thursday’s guidance from the Federal Highway Administration says electric vehicle chargers should be “as close to Interstate Highway System and highway corridors as possible,” and generally no more than one mile from the exit. Some older rest stops aren’t subject to the Eisenhower-era restriction. 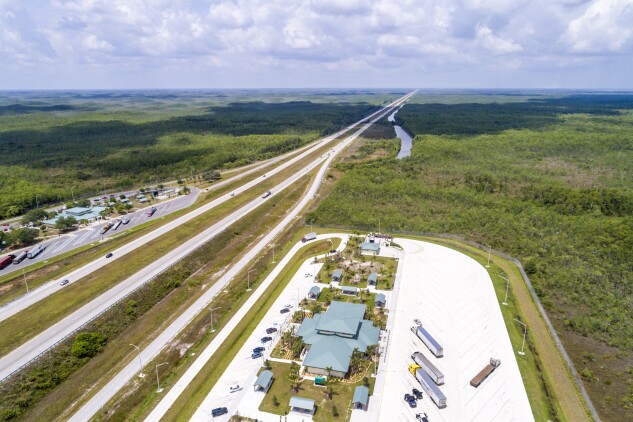 A rest stop along I-75 in Florida.
Photo: Jeffrey Greenberg/Education Images/Universal Images Group via Getty Images

The new guidance reinforces restrictions on commercial activities, including car chargers, within the interstate right-of-way, the National Association of Truck Stop Operators and the Society of Independent Gasoline Marketers of America, said in a joint statement Thursday. The groups, which which represent more than 80% of U.S. fuel retailers, argue that changing the ban on commercial services at rest areas would hurt private sector investment.

“Thousands of truckstops and travel centers are conveniently located less than one mile from highway exits,” wrote the groups, which want their facilities to host electric chargers.

Deputy Federal Highway Administrator Stephanie Pollack said in a statement that “Americans need to know that they can purchase an electric vehicle and find convenient charging stations when they are using Interstates and other major highways.”

Push to Change the Law

Katherine Stainken, senior policy director at the Electrification Coalition, said her group supports making car charging an acceptable commercial activity at interstate rest stops, and is working with others to change the provision.

The restriction “has the potential to force charging infrastructure further off the travel corridor, limiting solutions for planners, increasing range requirements for vehicles, and potentially inconveniencing drivers,” Stainken said.

The House-passed version of the infrastructure bill had language to permit car charging at rest areas, but that language didn’t make into the final law in November.