Activists gather in front of the White House Sept. 13, 2016, during a rally against the Dakota Access Pipeline in Washington, DC.
Photo: Alex Wong/Getty Images

Days after taking office, President cleared the way for construction of an oil pipeline in the Midwest that had been the focus of months of opposition by climate activists, celebrities and Native Americans.

Now opponents of the Dakota Access Pipeline are pressuring to take the extraordinary step of returning the favor should he win the White House. Analysts said they couldn’t recall a president shutting down an operating pipeline before, which is why its being viewed as a litmus test of how far he’d go to appease environmentalists who have supported him.

The project’s construction near the Standing Rock Indian Reservation was the scene of months of protests starting in early 2016 with opponents camping out along its proposed route and that arguing it would damage culturally significant Native American sites and pose an environmental hazard where it crosses the Missouri River. It became a rallying point for the anti-fossil fuel movement, and drew the support of film actors such as , , and Mark Ruffalo. 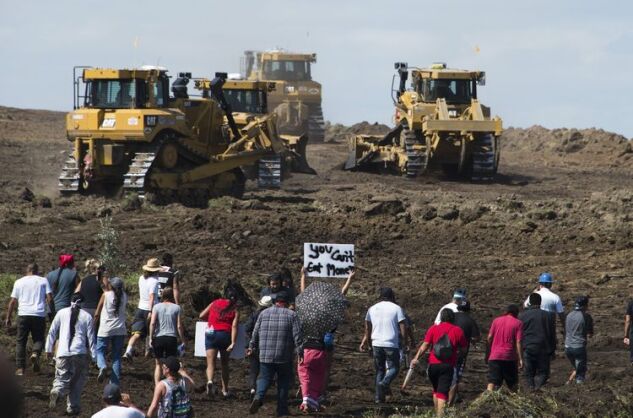 Native American protestors and their supporters are confronted by security during a demonstration against work being done on the Dakota Access Pipeline, which runs underground from North Dakota across four states and 1,172 miles to Illinois.
Photographer: Robyn Beck/AFP via Getty Images

Shutting down a three-year-old pipeline ferrying more than 500,000 barrels of crude oil each day would be a drastic step. But it has been operating without a permit following a court decision last summer that allowed it to stay open while an environmental review is conducted, something that could render it uniquely vulnerable to the whim of a new administration.

That’s put the $3.8 billion project in the crosshairs of environmentalists who want to restrict the use of fossil fuels. If Biden wins the presidency next week they will view his decision on the pipeline as an early test of his commitment to fighting climate change.

“This is something the Biden administration could change on day one with the stroke of a pen and it would essentially be unreviewable by a court,” said , an Earthjustice lawyer who represents the Standing Rock Sioux Tribe in their legal battle against the pipeline.

Opponents say a Biden administration has several ways to shut down—at least temporarily—the pipeline, which runs underground from North Dakota across four states and 1,172 miles to Illinois, where it then feeds markets across the Midwest and along the Gulf of Mexico. Biden could revoke its authorization to operate while the Army Corps of Engineers completes the court-ordered environmental review. And it’s possible the agency’s environmental review could result in a decision not to grant a new permit—a move that would require the company to reroute a portion of the line around the disputed land.

A spokesman for the Biden campaign didn’t respond to a request for comment.

The battle over the pipeline is emblematic of the a broader fight over climate change and the role of fossil fuel infrastructure. Biden, who said earlier this year he would rescind the permit for the $8 billion Keystone XL pipeline across the Canadian border if elected, hasn’t taken a public position on the Dakota Access oil conduit. But his running mate in May signed onto a court filingarguing the pipeline should be halted. 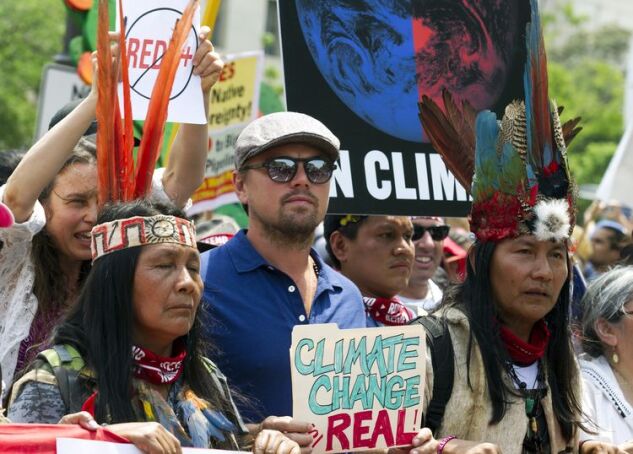 Leonardo DiCaprio, who gave support to opposing the construction of the pipeline, marches during the People’s Climate March in Washington.
Photographer: Jose Luis Magana/AFP via Getty Images

Proponents of Dakota Access have said the Biden administration should let the environmental review play out.

“Shutting down the line would have significant deleterious impacts on the availability of U.S. crude and, ultimately, refined product,” said Craig Stevens, a spokesman for Grow America’s Infrastructure Now, a pro-pipeline coalition. “Even if Mr. Biden is elected, the country will need close to 20 million barrels of crude oil a day—once the economy fully recovers. Where is that going to come from? I can’t imagine Mr. Biden handcuffing himself right out of the gate by taking Bakken production off the table.”

The pipeline has been operating without a permit to cross under the Army Corps of Engineers’ Lake Oahe in North Dakota since July when a U.S. district court it shut down on grounds that a crucial federal permit fell short of environmental requirements. An appeals court later the Trump administration could allow the pipeline to operate while a more robust environmental review is conducted.

Analysts are split on whether a President Biden would block the project. One distinct option is a halt to the pipeline while the environmental review process is underway, consulting firm ClearView Energy Partners said in a note to clients.

“We think the Biden administration could chose to make this a poster child,” Christi Tezak, ClearView’s managing director, said in an interview. “If there is a bad environmental review then you don’t have a permit.”

At the same time, Tezak said, he may be swayed by the economic impact of shutting down the project. A study commissioned by the trade group American Petroleum Institute estimated that shutting down the pipeline could result in the loss of 3,000 jobs due to depressed drilling activity and other industry investments.

The administration denied approval to complete work on the project in its waning days but Trump revived it shortly after taking office.

“There is growing scientific data as well as belief on the ground that you can’t stop climate change and build new pipelines, those do not go hand in hand,” said Jane Kleeb, chair of the Nebraska Democratic Party and founder of the , one of several groups that has been lobbying the Biden camp to halt the Dakota Access pipeline. “Vice President Biden can become a climate change president and say we are not building out any fossil fuel infrastructure—period.”

Armed with experienced lawyers and record funding, environmental groups are finding key pipeline permits in court. Now they’re seeking to enlist the help of a potential Biden administration—which has pledged to wean the country off of global warming greenhouse gas emissions by mid-century.

“The administration could at any point withdraw permission for the pipeline to be in operation,” said Dallas Goldtooth, a “keep it in the ground” organizer with the . “The hope is that if Biden gets into office, one of his first executive actions will be to revoke permission for to operate the pipeline.”

To contact the author of this story:
in Washington at anatter5@bloomberg.net

To contact the editor responsible for this story:
at jmorgan97@bloomberg.net