Regulations cutting down on climate superpollutants in refrigeration, lowering greenhouse-gas emissions from light- and heavy-duty vehicles, and improving sidewalk designs for people with disabilities are on the agenda, Sharon Block, the top political official in the White House regulations office, said in a statement. Biden officials will also consider how to improve insurance coverage for mental health and substance abuse treatment, Block said.

The list, typically issued twice per year, offers a window into how the Biden administration plans to use federal agencies in the new year to advance his priorities. The U.S. Fish and Wildlife Service has the longest list of items on the agenda, according to a Bloomberg Government analysis. The Internal Revenue Service is second, with more than 150 rules on its list.

The agenda isn’t final. Agencies will have to complete a number of tasks before the policies take effect, including drafting rules and collecting feedback. The White House regulations office, led by Block for now, will sign off on each rule before it is published. Biden published his first regulatory playbook in June.

Faced with near-unanimous Republican opposition in Congress, Biden has chosen to advance many of his priorities through regulation. However, he has taken the longest to nominate someone to lead the Office of Information and Regulatory Affairs since the position started requiring Senate confirmation in the late 1980s, according to Senate records.

House Republicans complained in October about Biden’s lack of a rules chief choice, and their Senate counterparts have signaled they would never get behind whoever he chooses for the job. Just six Republicans backed President Barack Obama’s nominee for the role at the beginning of his presidency.

The Environmental Protection Agency is making good on its promise to re-define waters of the U.S., or WOTUS, for a second time during the Biden administration.

The EPA in November proposed a rule that would officially scrap a Trump-era definition, reverting wetlands protections to a modified rule that was in place until 2015. In February, EPA will move ahead with yet another definition based on public feedback and experiences implementing all previous wetlands rules, according to the regulatory agenda. 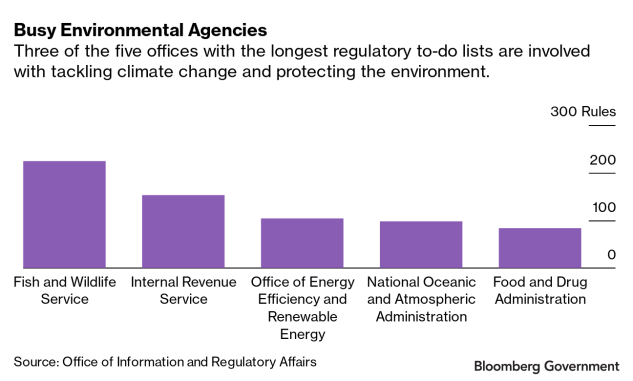 The agenda also calls for the Bureau of Land Management by March to propose a rule on natural gas venting, flaring, and leaks as a way to cut methane emissions—a key Biden administration pledge at the United Nations climate summit in Glasgow last month. The rule is slated to be finalized in November 2022.

The U.S. Labor Department plans to release a new regulation in April that would update overtime pay regulations and likely extend time-and-a-half wages to more workers.

The National Labor Relations Board will also attempt to revamp its joint employer rule, which creates shared liability for violations of federal labor law and joint duty to bargain with unions. An all-Republican NLRB issued a regulation setting an employer-friendly standard for joint employment during the Trump administration, which is the subject of a pending union lawsuit.

Treasury’s plans include wrapping up the last sets of rules from the 2017 tax overhaul, releasing new guidance on how companies should price their intergroup transactions, and working to finish an ongoing project dealing with cloud computing.

Treasury is also aiming to move forward on several previously planned regulatory projects about how groups value their intercompany transactions.

The Health Department is moving forward with a final rule that would modify a health privacy law to make it easier for doctors and hospitals to coordinate patient care.

Also on the agenda is the Biden administration’s effort to instate a dispute resolution panel to oversee fights within a federal drug discount program that has spurred a slew of challenges across federal courts. The 340B drug discount program helps low-income Americans by requiring drugmakers to provide products to certain health-care entities at discounted prices. Slated for January 2022, the new rule will propose new procedures for the dispute review board.

Banking regulators said that they expect to propose a long-awaited rewrite of a 1977 law requires banks to lend and invest in low- to moderate-income communities, and can lead to limits on their mergers and other growth if regulators find they haven’t done enough for those communities.