Renewable-energy developers preparing to build in East Coast waters are jockeying for space to plug their power into the grid, raising concerns that a lack of transmission lines could threaten the Biden administration’s goal of powering 10 million homes with offshore wind by 2030.

A flurry of proposed development aims to turn the waters from Massachusetts to the Carolinas into a hub of offshore wind energy, starting with the New York Bight—a strip of water between Long Island and the New Jersey coast that could send power to multiple state and regional jurisdictions.

The Interior Department early next year will lease up to 800,000 acres in the New York Bight, “the starting gun for a lot of activity, including a lot of transmission planning,” said Ted Boling, a partner at Perkins Coie LLP who served as the top lawyer for the White House Council of Environmental Quality in the Trump administration.

“There’s clearly a significant cost to do anything offshore, and particularly to develop a backbone transmission line,” Boling said. “That’s not going to happen until the costs are all figured out.”

Developers and regulators are essentially starting from scratch, with the vision of installing dozens of projects—some visible from beaches, others not—where offshore wind has failed to gain traction for years.

But getting that power to shore is emerging as a key unsolved part of the renewable energy future.

“Developers of wind and solar can really develop projects a lot faster,” said Patricia Hoffman, acting assistant secretary for the Energy Department’s Office of Electricity, at an online forum last month. “But if we can’t get those projects to the market and allow them to participate in the market, we are going to be challenged going forward.”

Only seven wind turbines are operating in East Coast waters, in pilot projects off of Rhode Island and Virginia.

Just two commercial projects have gotten the nod from federal regulators: Vineyard Wind, the first U.S. commercial offshore project, is under construction about 35 miles from Cape Cod, Mass. and expected to deliver power onto the New England grid in 2023.

And the 132-megawatt South Fork project, off the coast of Long Island, N.Y., was approved by the Bureau of Ocean Energy Management on Nov. 24 and expected to be operational by the end of 2023. New York state approved construction of the farm’s 7.6-mile transmission line in February.

But what comes next—namely, the New York Bight—highlights the kind of jurisdictional headaches that could raise costs and reliability issues for consumers, said Cullen Howe, senior renewable energy advocate for the Natural Resources Defense Council. 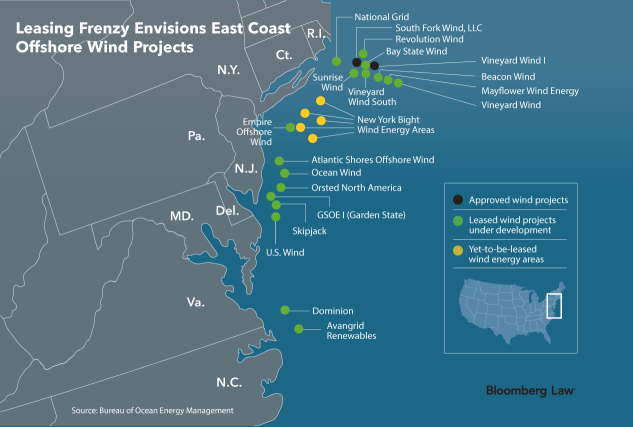 Howe and others also have called for officials to study a “backbone,” or shared transmission lines, that would link offshore parcels stretching from Massachusetts to North Carolina.

“It seemed like to us that that needed to happen ASAP,” Howe said of the transmission study. “The place to start thinking about this would be this committee, and this study would be the first step.”

Legacy fossil fuel giants such as and —with their own goals of reaching net-zero emissions by 2050—are also pressing Biden officials to act quickly.

“As soon as those New York leases are out, there is absolutely going to be a race” for interconnection to the grid, said James Cotter, general manager of Shell Offshore Wind Americas. Shell has two farms under development, Mayflower Wind near Massachusetts and Atlantic Shores near New Jersey.

Wind developers are planning to run a single line to shore to connect to the grid, often without building extra space for future developers who may want to plug in later. “While that works for the first few projects, what you’ll see is costs to the ratepayer will increase,” Cotter said.

In New Jersey, Shell recently committed to installing extra docks into the landfall as part of its Atlantic Shores project so other projects have space to plug in, he said.

“The capacity is there to get to 30 gigawatts,” Cotter said, referring to Biden’s goal. “It’s just how you can physically get to it.”

BP is confronting that challenge with its Empire Wind project in the New York Bight. BP declined a request for an interview, but a company official told federal energy regulators in October that planners should consider building one large transmission line rather than building many, smaller lines for each farm.

“Time is of the essence,” Downey Magallanes, BP’s head of U.S. policy and federal government affairs, wrote to regulators. “We must avoid having transmission become the limiting factor in the realization of states’ public policy goals and delivery of carbon-free offshore wind to the public.”

BP, partnered with Equinor, a Norweigian energy firm, has committed to as much as 4.4 gigawatts combined from the Empire Wind project and Beacon Wind in Massachusetts.

And last month, energy regulators who need to smooth out potential headaches with states and regional grid operators got a boost as part of the infrastructure bill. It authorized the Energy Department to spend $2.5 billion to contract for up to 50% of a proposed transmission line’s capacity, which could jump-start languishing wind projects.

The Federal Energy Regulatory Commission is in the first phase of a months-long rulemaking procedure that addresses who pays for the billions in new transmission infrastructure and corralling state and regional officials at the same table.

‘Chicken and the Egg’

More renewable energy and more locally generated power requires a shift in transmission strategy along with new grid technology like battery storage to dispatch power at the optimal times.

Zero-emission generators made up more than 90% of the 750 gigawatts of backlogged generating capacity waiting to connect to the U.S. power grid at the end of 2020, according to an Energy Department study.

Twenty-two transmission projects are “ready to go” to connect 60 gigawatts of renewable power, according to an April report sponsored by Americans for a Clean Energy Grid. The study sought policies like a transmission investment tax credit, use of the Energy Department’s contracting authority, and broader cost allocation of the grid upgrades so developers aren’t footing the bill.

While Northeast and mid-Atlantic states have set ambitious goals to procure clean energy, much of the U.S. wind capacity is in the Great Plains, and the bulk of solar capacity is in California and Texas. High power prices and the lack of natural gas pipelines to the Northeast have only hastened the push for renewable energy among state officials.

Offshore wind developers see an opportunity to build closer to customers. But they face difficult conversations with regional grid managers tasked with keeping a stable and affordable flow of electricity to customers.

Grid operators may be reluctant to put ratepayers on the hook for billions of dollars of transmission investment before the projects come online, yet the project developers say they need new infrastructure to deliver their energy in a cost-effective way for ratepayers.

“There’s been this whole chicken and the egg problem,” said Howe.

Offshore wind, which has boomed along European shores near the U.K., Germany, and the Netherlands, has been notoriously difficult to build in the U.S., said Mark Menezes, a former deputy secretary of energy.

The Cape Wind Project became a poster child of those difficulties in the mid-2000s, succumbing to criticism that it would spoil ocean views in Nantucket Sound off Cape Cod, he said. Wind projects also have faced opposition from fisheries who feared environmental damage and the high costs and technical challenges that come with building a wind farm in ocean waters.

The wind industry has come a long way since Cape Wind, whose lease was ultimately relinquished, Menezes said.

But offshore wind needs the kind of infrastructure enjoyed by other energy sources, he said, noting the vast network of offshore oil and gas pipelines that feed U.S. energy companies today.

“The same kind of thing is going to have to happen with offshore wind,” he said. “You’ll have all these undersea cables tying into a larger transmission line that’s going to come onshore.”

“The here and now is a single line; the future is likely a system offshore,” said Hitt, who previously led the New Hampshire Transmission Company. “It’s not like it can’t be done from a technical standpoint—we’ve got economic and policy hurdles.”