Tribes and environmentalists are hailing President Joe Biden’s commitment to use the Antiquities Act to create a national monument in Nevada to protect tribal sacred sites, preserve wildlife and Joshua tree habitat, and block the approval of a wind farm.

But legal clouds are gathering in neighboring Utah, where federal litigation aimed at the US Supreme Court seeks to short-circuit the White House’s ability to use the 1906 Antiquities Act to set aside large tracts of environmentally sensitive public lands from development.

Biden said Nov. 30 he’d use the act to create the Avi Kwa Ame National Monument championed by southern Nevada local governments and area tribes—a 450,000 acre preserve that would be about five times the size of Las Vegas. The monument would protect land and imperiled wildlife habitat near Spirit Mountain, a peak already protected as wilderness that the Fort Mojave Indian Tribe and nine other area tribes consider sacred.

One potential casualty would be Eolus North America Inc., which expects to lose its bid to build the proposed 308-megawatt Kulning Wind Energy Project on federal land within the potential monument’s boundaries if Biden creates Avi Kwa Ame.

The land is “part of our origin story,” said Ashley Hemmers, administrator of the Fort Mojave Indian Tribe. “We’re not against clean energy. It doesn’t have to come at the demise of a sacred site.” 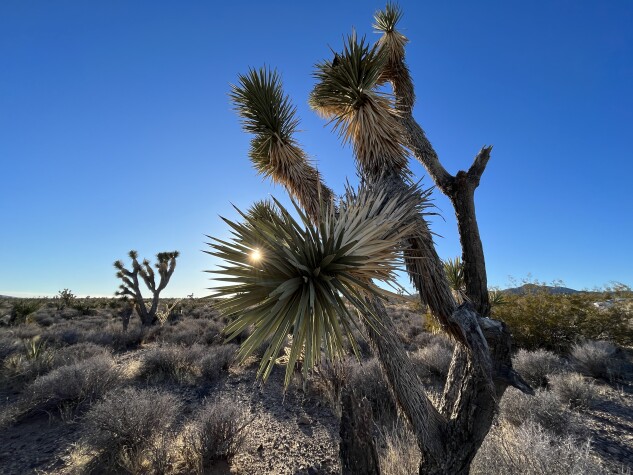 National monuments can be created by Congress or declared unilaterally by the president under the Antiquities Act. President Bill Clinton in 1996 notably used the law to create Utah’s Grand Staircase-Escalante National Monument without local support as a way to protect more than 1.8 million acres of federal land from coal and other development.

If Biden creates Avi Kwa Ame, it would be the country’s 10th largest onshore national monument by land area.

After Congress failed to act on a bill (H.R. 6751) sponsored by Rep. Dina Titus (D-Nev.) to create the monument legislatively, Biden turned to the Antiquities Act to designate the monument and protect federal land overseen by the Interior Department’s Bureau of Land Management in southern Clark County, Nevada, southwest of Las Vegas.

Titus said she supports Biden’s use of the law. “It’ll keep development out of that area,” Titus told Bloomberg Law. “I’m all for development for renewable energy, but Nevada is so large and has so much open space that there are many places to put a wind farm.”

Eolus wants to build in a windy area near Las Vegas so the project can tie into existing electric transmission infrastructure and provide electricity to 100,000 homes in southern Nevada, said Ed Duggan, senior director of wind development for Eolus.

“If the monument were to be enacted, as proposed, that would probably prevent the wind project from being able to be built,” Duggan said on a windy December day, standing near one of the project’s possible wind turbine sites surrounded by Joshua trees.

The wind farm would help Nevada meet its renewable energy goals and “provide balance to the large amount of solar in the area,” Duggan said.

Eolus scaled down a larger proposal in 2020 for Kulning after the Interior Department cast doubt on the project. The department then labeled Eolus’ Kulning application “low-priority,” partly because it was too close to a nearby Joshua tree forest and wildlands in California, and the agency set its projected final permit decision date for 2028. 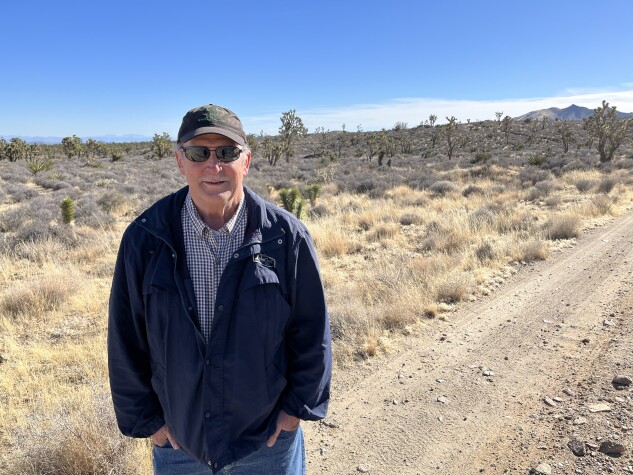 The company has appealed the decision to slow-track project permitting to the Interior Board of Land Appeals, where its case is pending.

Duggan said Eolus has proposed an alternative set of monument boundaries that would exclude the wind farm site, but Interior officials haven’t acted on it.

Interior’s low-priority designation for the Kulning project means that it “may not be feasible to authorize,” Interior Department communications director Melissa Schwartz said.

There are other places in Nevada to build a wind farm outside of the proposed monument, Schwartz said.

The White House, which would determine Avi Kwa Ame’s final boundaries, didn’t respond to a request for comment.

If Biden creates Avi Kwa Ame and Interior kills the Kulning project, Eolus will not likely challenge the decision in court, Duggan said.

Courts so far have been hesitant to challenge presidential authority to use the Antiquities Act to declare national monuments across vast landscapes, such as Utah’s Bears Ears and Grand Staircase-Escalante national monuments, which together cover an area roughly the size of Connecticut.

Even if Eolus doesn’t plan to fight, it could eventually get a boost from a federal court case in Utah designed to reach the Supreme Court and hamstring the White House’s ability to declare national monuments to block energy development on federal land.

Developers and other public land users argue they’re injured by the unilateral presidential proclamations, and the Supreme Court is likely to question that authority, said William Myers, a partner at Holland & Hart LLP in Boise. Myers has represented industry clients in litigation against monument designation.

That’s the goal that the Blue Ribbon Coalition, a motorized vehicle recreation group, and the state of Utah have set for Garfield County v. Biden, a consolidated case filed in August in the US District Court for the District of Utah. 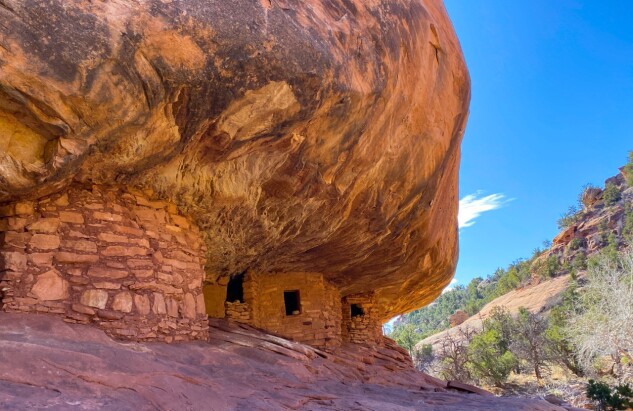 A view of the “House On Fire” ruins in Mule Canyon in Utah’s Bears Ears National Monument in 2021.
Photographer: Bobby Magill/Bloomberg Law

The suit aims to get the Supreme Court to overturn the designations of Bears Ears and Grand Staircase-Escalante national monuments by declaring it illegal to use the Antiquities Act to set aside entire landscapes as historic “objects” that the law aims to protect.

“Anyone who’s interested in the monuments, pro or con, should be watching this litigation carefully to see where it goes,” Myers said.

The case stems from a 2021 comment Chief Justice John Roberts made in denying certiorari in Massachusetts Lobstermen’s Association v. Raimondo.

Roberts said that when President Barack Obama declared a 5,000-square-mile national monument in the Atlantic Ocean off the coast of Massachusetts in 2016, he “banned almost all commercial fishing in the area.”

The Antiquities Act was passed in 1906 because of widespread defacement of Native American ruins, allowing presidents to protect historic objects as national monuments along with surrounding small parcels of land, Roberts said.

Since then, Congress has restrained presidents from using the Antiquities Act in Wyoming, where its use is prohibited entirely, and in Alaska, where new monuments are limited to just 5,000 acres.

But elsewhere, the act’s use has been “transformed into a power without any discernible limit to set aside vast and amorphous expanses of terrain,” Roberts wrote, adding that the court may have an opportunity to consider the issue in the future.

Ben Burr, executive director of the Blue Ribbon Coalition, said he wants Garfield County to be that opportunity.

“The purpose of our lawsuit is ultimately to see if the Supreme Court will weigh in on what are the limits of the Antiquities Act,” Burr said.

Presidents Clinton and Obama abused their power when creating Grand Staircase and Bears Ears, and Biden would be doing the same if he declares Avi Kwa Ame, Burr said.

Legal experts are divided about what the lawsuit will mean for Avi Kwa Ame and other large national monuments.

“I think there is a good chance the Court will agree to review Bears Ears and that the major question doctrine is likely to come into play,” Parenteau said in an email.

“The precise issue will be how broad the term ‘objects of scientific interest’ is to be interpreted,” Parenteau said. “Does it include entire ecosystems? Or is that something that requires more specific authorization from Congress?”

But John Leshy, who served as Interior Solicitor in the Clinton administration, said the Garfield County lawsuit takes “a quite radical interpretation” of the Antiquities Act.

“Utah’s reading of the Act would, its complaint is frank to admit, permit presidents to protect only small tracts of public land,” less than 1% of the total area of Bears Ears, Leshy said.

“It is very unusual for courts to revisit longstanding precedents that interpret statutes like the Antiquities Act,” he said. “For more than a century, the courts have, consistently and unanimously, rejected every single court challenge ever made to the presidential use of the Act.”

Environmentalists see the case as a direct threat to one of the most effective tools to protect public land, said Tom Delehanty, an associate attorney for Earthjustice.

The lawsuit “would weaken executive authority to protect public lands, threatening lots of cherished places across the country,” Delehanty said. 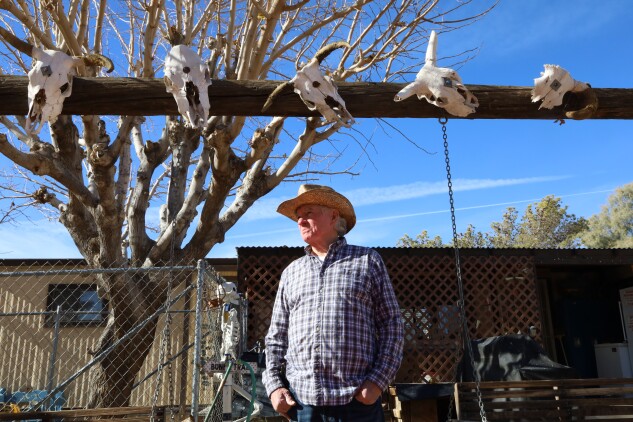 Some of the proposed Nevada monument’s neighbors say they worry it will shut down access to mines across the state line in California and restrict recreation.

Monument proposals sound good at first, “but in reality, years later is when you’re notified, hey, you can’t really go out there and use the land for anything but maybe walking on it,” said Dennis Benson, a resident of Nipton, California, just a few miles from the proposed Avi Kwa Ame boundary.

But monument supporters say the sacredness of the land and the quality of the wildlife habitat across the southern tip of Nevada are more pressing than other concerns, including blocking a wind farm.

Protecting the region around Spirit Mountain is essential to the Fort Mojave Tribe because the animals found on the land form the basis of the tribe’s creation story, said Hemmers, the tribe’s administrator. The monument will help prevent the tribe’s traditions from being erased, she said.

“We have to remember, it’s not just the people and not just the story,” she said. “It’s a balance, the ability to protect the species we can protect.”