Replacing lead pipes in homes has become a call to arms for the White House
Image: Jonathan Hurtarte/Bloomberg Industry Group

Lead pipes pose one of the biggest drinking water quality threats in the U.S., and in the wake of the Flint, Mich., water crisis stemming from lead contamination, they have become a call to arms for the Biden administration.

Replacing lead service lines nationwide is among President Joe Biden’s biggest infrastructure goals, and it’s a key part of the infrastructure bill now moving through Congress. The Environmental Protection Agency has conducted rulemakings for lead pipe replacement in both the Biden and Trump administrations.

Here’s a look at the context for the national discussion about lead pipes and what’s at stake.

1. Why are lead pipes considered a health risk?

Drinking water becomes contaminated with lead primarily because some water pipes, or service lines, that connect homes to the water main are made of lead—especially in cities that have not been able to invest heavily in water infrastructure. Acidic water corrodes lead pipes, leaching the metal into the water.

The Flint water crisis highlighted the risk lead pipes pose in cities across the country. Lead leached into Flint’s drinking water from aging pipes after the city of Flint switched to a more corrosive water source—the Flint River.

Lead in drinking water mostly poses a serious health threat to children—especially in Hispanic and Black communities like those in Flint.

Kids are most at risk because even small amounts of lead have been found to contribute to cause nervous system damage, learning disabilities, hearing impairment and damaged blood cells, among other health problems, according to the EPA.

The same amount of lead would not have the same effect on an adult, but larger doses can cause kidney and heart damage, hypertension and reproductive problems.

More than 40,000 young children were found to have above-acceptable blood lead levels in the 26 states that reported data to the Centers for Disease Control and Prevention in 2017, the most recent year for which data is available.

Most adult lead exposure is work-related and occurs at a rate of about 16 adults per 100,000 as of 2016 in the 26 states reporting data, according to the CDC.

2. How serious is our lead pipe problem?

It’s unclear exactly how many lead service lines there are nationwide. A 2016 study by the American Water Works Association study estimated about 6.1 million lead service lines in all 50 states. The EPA uses the study to estimate the numbers of lead pipes that need to be replaced across the country.

States with the largest estimated numbers of lead pipes are in the Rust Belt across the Midwest. With 730,000 lead pipes in 2016, Illinois had more lead pipes than any other, followed by Ohio with 650,000 and Michigan with 460,000.

Lead pipes are slowly being removed. The AWWA study showed that there were about 10.2 million lead pipes in the U.S. in 1991 when the EPA finalized its original Lead and Copper Rule, which set lead service line replacement standards.

It will be difficult to find all lead service lines because some cities do not have good records for them. The Association of Metropolitan Water Agencies says it will be a massive undertaking to find them all, possibly requiring utilities to visually inspect each home’s service line.

The EPA maintains the scope of the problem is well-documented, however. “These antiquated systems are well known, well documented,” EPA Administrator Michael Regan said in April. “And we have staff right now looking at the best way to leverage those resources.” 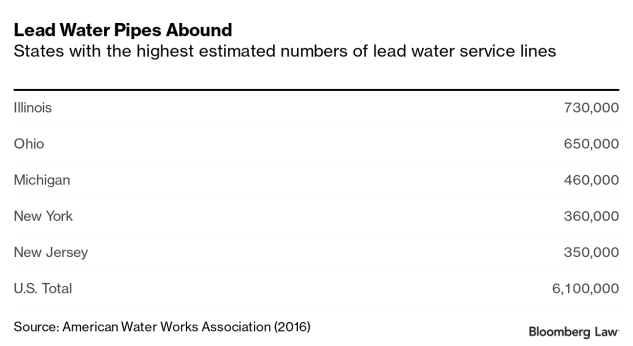 3. What’s the EPA doing about the lead pipe issue?

The Biden-era agency is working to reverse the Trump administration’s attempt to weaken the lead and copper rule.

The Trump rule (RIN 2040-AF15) garnered harsh criticism from environmental groups, which said it will expose more children to lead poisoning. It requires water systems to replace at least 3% of lead service lines annually—down from 7% under the 1991 lead and copper rule.

The Biden administration is expected to write a new more stringent rule or revise the Trump rule, possibly requiring cities to replace more lead pipes each year. The EPA hasn’t yet reversed the Trump rule, which is set to take effect in December.

In the lead-up to a possible new rulemaking, the EPA is gathering public feedback during roundtables focused on communities around the country.

4. What are the White House and Congress doing?

Lead pipe replacement is one of the White House’s top infrastructure priorities, with a goal to replace 100% of the nation’s lead service lines as part of its American Jobs Plan.

Biden said in March that he wants Congress to invest $45 billion in the EPA’s Drinking Water State Revolving Fund and in Water Infrastructure Improvements for the Nation Act grants as routes to lead pipe replacement.

Those investments were part of the House infrastructure bill (H.R. 3684), sponsored by Rep. Pete DeFazio (D-Ore.), and passed in June. A provision included in the House version of the bill would double funding for lead pipe replacement in schools.

The Senate version of the bill remains in committee, but lead pipe replacement is expected to be included in the final version.

Environmental groups say the funding the Biden administration is calling for wouldn’t be sufficient to replace all the pipes because the true scope of the country’s lead pipe problem isn’t fully understood.

—With assistance from Stephen Lee.

Bobby Magill
Reporter
Where Are the Lead Pipes? Finding Them May Prove Tough for EPA
Many Big Cities Don’t Know Where Their Water Pipes Are, GAO Finds
Replacing All Lead Water Pipes Under EPA Consideration
© 2022 The Bureau of National Affairs, Inc.
All Rights Reserved