It’s that time of year again. Supreme Court watchers are patiently waiting for decisions and speculating wildly about the possible departure of the high court’s swing vote: Justice Anthony Kennedy.

The departure of the current longest-serving justice would mean the loss of the most institutional knowledge on the court, including the most experience in employee benefits cases.

Kennedy has written the second-highest amount of majority and separate opinions in employee benefits cases of all the sitting justices. His record is bested only by Justice Clarence Thomas, who has been the court’s most prolific author in Employee Retirement Income Security Act cases.

Neither the Supreme Court nor the justice himself have confirmed or denied rumors of the departure. The silence is exacerbated by Kennedy’s age of 81—high for a Supreme Court justice, though Kennedy is still junior to colleague Ruth Bader Ginsburg, who is 86.

“At a high level, I suspect that the effect on benefits cases will be a microcosm of what his retirement would mean for the court more broadly,” W. Mark Smith, a lawyer at Eversheds Sutherland LLP in Washington, told Bloomberg Law. The loss of Kennedy’s experience and tie-breaker status would have a lasting impact.

There have been 129 employee benefits cases brought to the Supreme Court since the year ERISA was passed in 1974, Smith said. Of that total, Kennedy has participated in 88, the third most of any justice in that time period and the most of the sitting members of the court. Smith was one of the authors of his firm’s 2017 report on high court ERISA litigation. 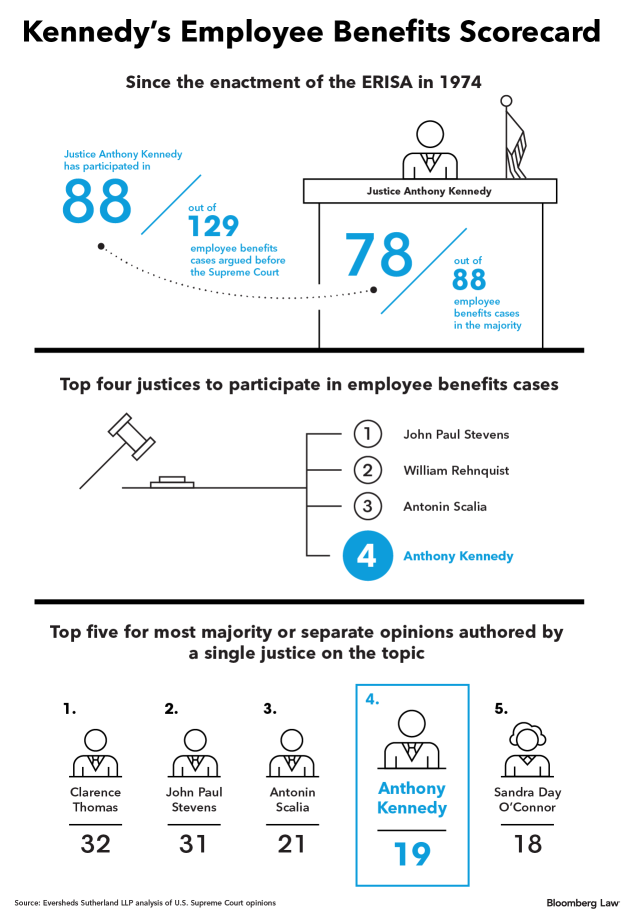 In his tenure, Kennedy has written at least his “fair share” of majority opinions in close employee benefits cases, Smith said.

“After his retirement, the court may need another justice to help provide the glue in tough cases to get the court to a decision,” Smith said.

Sean M. Anderson, a professor at the University of Illinois College of Law who focuses on retirement plan and ERISA law, echoed Smith, saying Kennedy’s retirement wouldn’t make an impact on the majority of future ERISA cases that the court might take up.

Many of the court’s ERISA decisions have been unanimous, and Kennedy has “far more often than not voted with the more conservative justices on the court” in split employee benefits decisions, Anderson said.

His retirement and replacement with a likely more conservative justice would impact only the few contested cases in which he has sided with the liberal justices, Anderson said.

For example, in 1996, Kennedy sided with a liberal majority in Varity Corp v. Howe, which allowed retirement plan participants who had been tricked into forfeiting their benefits by Varity Corp. to proceed with a breach-of-fiduciary-duty claim against their employer. Justices Antonin Scalia, Sandra Day O’Connor, and Thomas were in the minority.

Despite Kennedy’s experience in employee benefits cases, he hasn’t appeared to carve out his own judicial philosophy on the subject.

“ERISA is not an area of law where Justice Kennedy has created his own personal ideology,” Brian D. Netter, lawyer at Mayer Brown in Washington and co-chair of the firm’s ERISA litigation practice, told Bloomberg Law.

Kennedy has often sided with the more conservative justices of the court when in employee benefits decisions, Netter said. “I would think that a replacement for Justice Kennedy would see those decisions in a similar way.”