Decisions by Florida and Colorado voters to pass labor-friendly ballot initiatives over objections from business groups underscored a national movement toward improving benefits and pay for low-wage workers, even as employers grapple with unprecedented financial pressures in the Covid-19 pandemic.

Florida voters approved a $15 hourly minimum wage (Amendment 2) by a vote of about 61% to 39%,while voters in Colorado passed a new paid family and medical leave program (Proposition 118) by a vote of 57% to 43%.

The success of the measures — particularly in Florida, on a night Republicans won the presidential race and flipped several House seats there — showed that worker needs resonate across the electorate. The Sunshine State is the first to raise its hourly wage to as high as $15 an hour via ballot measure, although approval of the initiative continues a strong winning streak for state minimum wage hikes since 1996.

“If a minimum wage increase passes there on the ballot, I think it’s a good indication that there’s broad support for it nationally,” said Tsedeye Gebreselassie, work quality director at the National Employment Law Project.

Voters in California approved a ballot measure that, while exempting rideshare and food delivery drivers from a 2019 law requiring them to be classified as employees and not independent contractors, required them to be paid a minimum wage and receive some benefits if they drive at least 15 hours a week. 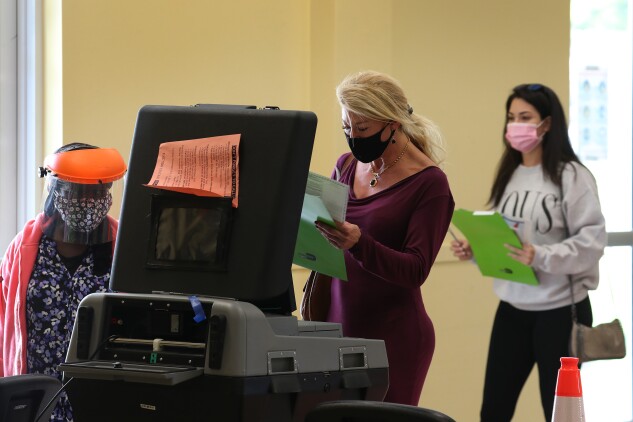 A Florida voter, Jannelle Riguez, casts her ballot at the Legion Park polling place on Nov. 3, 2020 in Miami.
Photo by Joe Raedle/Getty Images

A September analysisby the left-leaning Florida Policy Institute estimated that raising the minimum wage gradually through 2026, under the proposed amendment, would benefit one in four working Floridians of all ages—2.5 million people—and bring 1.3 million households out of poverty while also narrowing gender and racial pay gaps.

While Florida is the first state to approve a $15 hourly minimum by ballot measure, the amount is in line with the phased-in minimum wages that have been enacted in eight other states plus the District of Columbia.

“A lot of places will be at 15 in the next couple of years, so especially when you see it in that context, 15 by 2026 is extremely gradual,” Gebreselassie said.

Business groups, including the Florida Chamber of Commerce, said hiking the hourly minimum to $15 would benefit large corporations but devastate small, local businesses already struggling with the economic impacts of the coronavirus pandemic.

Carol Dover, president and CEO of the Florida Restaurant and Lodging Association, said the increase will be “a lethal blow to an industry already on life support.” The measure’s passage will mean “we will have to cut jobs. We’ll have to reduce hours,” Dover said.

Ads paid for by Americans for Prosperity-Florida argued that the amendment would result in at least 158,000 jobs being eliminated.

“This is a modern-day Trojan horse,” said state Rep. Chris Sprowls (R), the next speaker of the Florida House. “The reality is, it’s going to have a devastating impact on workers’ jobs and their ability to find a pathway to prosperity.”

Restaurant workers and others who work for tips will be left behind, he said. “Mom-and-pop businesses, servers at restaurants—they’re the ones who are going to suffer. It’s never going to be the CEO, it’s going to be the worker,” Sprowls said.

Colorado will become the ninth state plus the District of Columbia to adopt a mandatory paid family and medical leave program covering private-sector workers, but the first to do it by citizens’ initiative, said Jared Make, a vice president at the advocacy group A Better Balance.

The state-run program will allow employees to take up to 12 weeks of leave without losing their job, will be funded by a premium set at 0.9% of an employee’s wages, half paid by workers and half by employers.

The success of the ballot measure means workers “have finally had a say, and are no longer beholden to the big-business money interests that have been running the show for so long,” said Olga Robak, spokeswoman for the Yes on 118/Colorado Families First campaign.

Business interests defeated attempts to get paid family and medical leave through the state legislature six times in the last five years, she said, “but when real people finally get a say, we see that the outcome is completely different.”

Interest in the Colorado initiative “has only been intensified by the pandemic,” said Make, who took part last year in a Colorado General Assembly task force to study paid leave.

“This is something that workers need,” he said. “The United States is a real outlier in terms of not having a federal paid family and medical leave policy in place.”

Make said he has heard interest from many state lawmakers looking for help designing a program for their own states.

“We’re going to see a large number of bills as we enter the 2021 session,” Make said.

The Colorado ballot measure means employers might have to hire temporary workers to fill the jobs of employees on leave at the same time they’re trying to rehire workers they had to lay off because of the pandemic, said Tony Gagliardi, executive director of the Colorado chapter of the National Federation of Independent Business.

He said the cost of the program has been estimated to be as high as $1.3 billion.

“This is a program the state of Colorado can’t afford and puts at risk every taxpayer in the state,” Gagliardi said.

Covid-19 made voters more sensitive to the needs of workers and their families, Robak said.

“This program is incredibly affordable and will help us prepare for future emergencies,” she said. “It creates a more family-friendly business environment that allows workers to put their families first.”

With assistance from , , and

To contact the editors responsible for this story: at mmuellerneff@bloomberglaw.com; at mmali@bloombergindustry.com