Companies facing litigation over their employees’ 401(k) plan fees are increasingly discovering they’ll have to pay $10 million or more in defense costs before their insurer will begin footing the bill.

A sharp spike in lawsuits over retirement plan fees has wreaked havoc on the market for fiduciary liability insurance, which provides protection for companies accused of mismanaging their employee benefit plans. This coverage helps fund litigation costs when a company is sued for fiduciary breach under the Employee Retirement Income Security Act.

Until recently, these policies were simple to acquire and inexpensive compared to other business insurance.

But the market has changed “pretty dramatically” in the past two years because of the extraordinary number of lawsuits challenging 401(k) plan fees, Rhonda Prussack, senior vice president and head of fiduciary and employment practices liability at , told Bloomberg Law.

Retirement plan investors have filed about 140 proposed class actions challenging their plans’ fees in 2020 and 2021, according to a Bloomberg Law analysis. The nearly 100 cases filed in 2020 represented a big increase from 2019, when only about 20 cases were filed. 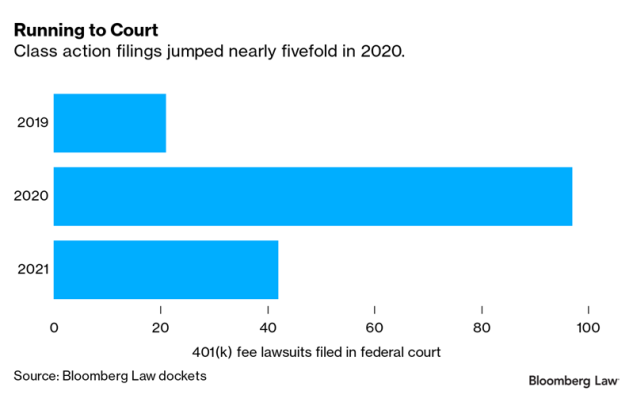 “Instead of being plans of big corporations, we’re seeing the spread to private companies and not-for-profit organizations.”

The growing sense that any company with a 401(k) plan could be sued has caused serious disruptions in the insurance market. The biggest changes have been in retentions—the amount of money a company must pay out-of-pocket before insurance coverage kicks in, similar to a deductible.

Prussack called this shift a “sea change,” adding that she’s seen retentions as high as $15 million for claims of excessive plan fees, when previously retentions of $0 were fairly common.

The unpredictability of what could spur a 401(k) lawsuit is making it harder for insurers to properly underwrite risk, Dudley, who is the council’s senior vice president of global retirement and compensation policy, said.

In some instances, an employer has been sued for offering a particular 401(k) fund, even though that same fund was an example of a good investment in a different lawsuit, Dudley said.

“It’s getting more expensive because it’s harder to underwrite a risk that you can’t evaluate because it’s constantly changing,” she said.

Retirement plan sponsors have weathered waves of class actions before, but they weren’t as widespread and weren’t perceived as such a significant threat to insurers’ solvency, Fine said.

What’s more, the lawsuits have been successful. Of the cases filed in 2020, more than 30 have at least partially survived a motion to dismiss, while only about 10 have been dismissed outright.

And settlements can be significant, particularly if the defendant is a financial company that puts its in-house funds in its retirement plan. That subset of cases has garnered more than $430 million in settlements since 2015, including more than a dozen eight-figure deals, according to a Bloomberg Law analysis.

The fiduciary liability insurance market has been very profitable for decades, Willis Towers Watson’s Fine said, including during previous litigation waves. The carriers responding as if this wave is different may be “overreacting” and may wind up with “much smaller books of business” when all is said and done, he said.

“There’s a history of trends coming and going in the fiduciary liability cases,” Fine said. “There have been trends that were worrying for some period of time, but ultimately went away for various reasons. I think this will wind up going the same way eventually.”

“Legacy carriers got hit with lots and lots of these fee cases, and they’re reacting with those big retentions and cutting limits,” she said. “There’s a lot of opportunities for carriers that don’t have those legacy claims and have the opportunity to build a book that has more appropriate premiums and terms.”

“If they could use more pointed underwriting and really try to figure out what the ultimate damage might be on specific cases, they really can take advantage of this hardening in the market,” she said.