The headquarters of the Securities and Exchange Commission in Washington on Dec. 22, 2018.
Photographer: Zach Gibson/Bloomberg via Getty Images

The long-delayed Securities and Exchange Commission rule, approved on Wednesday, covers not only formal financial restatements, but smaller revisions that companies quietly tuck into their filings. It calls on companies to develop pay clawback policies for errors so they can hold their executives accountable and stay listed on public exchanges.

“It’s certainly not good news for them,” said Martha Steinman, a co-chair of the Hogan Lovells employee benefits and executive compensation practice. “It opens up, obviously, a much, much broader world of circumstances under which you’re going to have to stop and say, ‘Gee, is there compensation here that I may need to recover?’”

Executive bonuses are often tied to financial targets, like earnings per share or EBITDA, earnings before interest taxes depreciation and amortization. If an accounting mistake, like miscalculating revenue or understating expenses, throws off a compensation metric, the executive could be liable to pay back the difference, according to the rule.

The number of companies with voluntary compensation clawback policies has doubled since 2015, but most of those compensation recovery plans don’t go as far as the new rule, the SEC said. Executives may only have to give back part of their bonuses in the event of misconduct or fraud in voluntary scenarios, for example.

The new rule goes much farther, widening the events that would trigger recovery analyses, applying clawbacks to former executive officers who’ve left the company, and requiring “no fault” restatements to be part of the analysis. Companies would be required to recover bonuses awarded to executives going back three years from the date of the accounting error. The amount clawed back would be pay received in excess of what the payout should have been using correct financial reporting.

The new rule also shines a light on frequent—and largely hidden—"Little R” financial statement error corrections. Those mistakes, which could be anything a company deems material enough to correct but not major enough to formally announce, don’t require the fanfare of “Big R” restatements. Big R restatements necessitate 8-K reports announcing accounting mistakes. Not only must companies now develop clawback policies that contemplate both types of corrections, they have to label their annual financial reports with a special checked box indicating that they’ve corrected past errors. 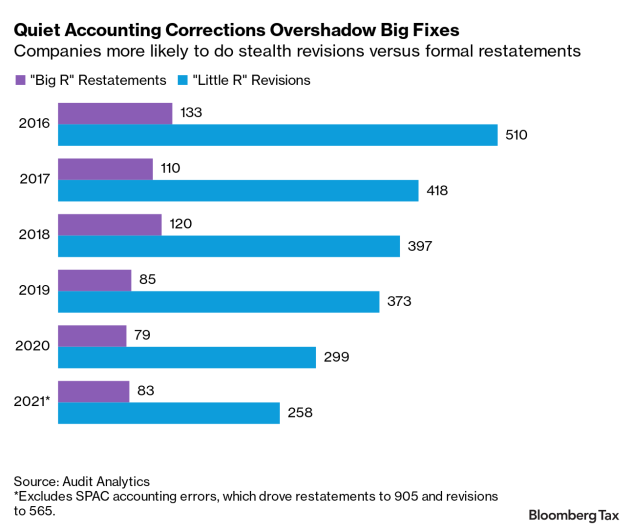 This is a positive development for financial reporting transparency advocates, who long have complained that the quiet revisions are purposely opaque, said Jeff Mahoney, general counsel for the Council of Institutional Investors, which represents public pensions.

“A disappointing trend has emerged of companies opportunistically using their discretion to categorize more and more corrections to financial reports as Little Rs,” Mahoney said.

Big R restatements have nosedived over the years, apart from 2021, when pervasive special purpose acquisition company accounting errors prompted two waves of mass restatements. Restatements from large, well-established companies are even rarer, with just a handful of S&P 500 companies–, , , and –issuing formal corrections in the past two years.

Smaller revisions, on the other hand, are about three times as common as formal restatements, according to Audit Analytics. The SEC’s top accountant, Paul Munter, in March warned about bias toward stealth fixes, saying companies needed to better assess the materiality of their errors and flag them for the market.

Academic research suggests that companies have reasons to avoid formal restatements: their executives’ paychecks. Companies with clawback policies for serious accounting errors may be 15% to 20% more likely to fix their mistakes with revisions, said Rachel Thompson, assistant accounting professor at North Dakota State University, who is studying restatements and revisions between 2004 and 2015.

Accounting mistakes that require Big R restatements are, by their nature, more likely to require companies to consider clawing back bonuses. But companies will have to do the analysis, regardless.

“These Big Rs are more likely to move the needle—they’re more likely to actually result in a change in compensation and require clawback,” Thompson said. “With Little Rs, there will be some. The inclusion of them will have a difference, but how much is yet to be seen.”

The 2010 Dodd-Frank Act, which mandated clawbacks, never specifically directed the SEC to create a rule to recover bonuses due to Little R revisions. The agency’s 2015 proposal didn’t directly mention clawbacks for small accounting errors, either. Including language about clawbacks from these mistakes in a final rule gained traction at the SEC when Chair Gary Gensler took the helm in 2021.

Including smaller revisions was surprising, said Alan Wilson, a Wilmer Cutler Pickering Hale and Dorr LLP counsel, who advises companies on the intersection between securities laws and accounting.

“Before then, I don’t think anybody actually read the underlying statutory requirement to suggest that we would need to dig into Little R, and it doesn’t match with market practice,” Wilson said. 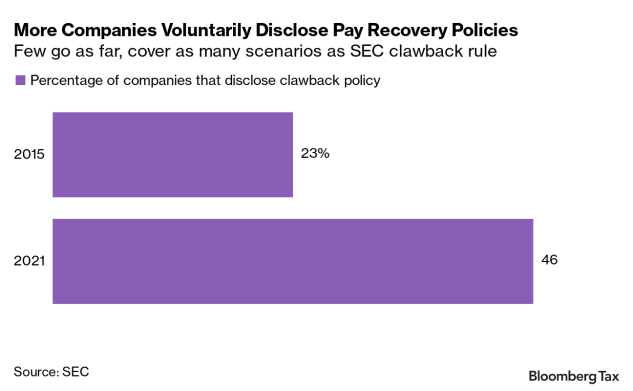 The US Chamber of Commerce, Society for Corporate Governance and other business interests told the SEC to leave Little R clawbacks out of its final rule. These smaller corrections have minimal impact on compensation, making any resulting clawbacks unwarranted and costly to execute, the Society for Corporate Governance, which represents corporate secretaries and other executives, said in a letter to the SEC last year.

“If companies and their auditors are misjudging the materiality of financial statement errors, a compensation clawback rule is not the proper way to remedy the problem,” Peirce said.

The Council of Institutional Investors, Public Citizen and other investor advocates pushed for including the smaller revisions. The Dodd-Frank Act never intended to exclude Little R revisions, the Council of Institutional Investors, which helped develop the law’s clawback language, said in a letter to the agency last year. Limiting the rules to big restatements would harm investors, the group said.

Executives should return bonuses awarded based on any errors about company milestones, regardless of the restatement type deployed, Gensler said before voting in favor of the rule on Wednesday. The rule is expected to take effect in about a year.

“Why should they get paid on something that was never hit?” Gensler said. “That’s what Congress really was addressing.”

(Updated after paragraph 17 to include comment from SEC Commissioner Hester Peirce. An earlier version corrected a reference to frequency of revisions. )