The SEC has increasingly sided against companies seeking permission to block votes on shareholders' environmental and social proposals.
Photo by SAUL LOEB/AFP via Getty Images

The SEC is quashing more company requests to exclude shareholder proposals related to climate and social issues from their proxies after a significant policy change in November.

The agency said last year that it would start factoring in broader social policy considerations when evaluating requests to cast aside proxy proposals that companies see as micromanagement or interfering with regular business operations.

That policy shift on “no-action letters” has emboldened retail and activist investors to be more aggressive with environmental and social proxy proposals, said Derek Zaba, a Sidley Austin LLP partner and co-chair of the firm’s shareholder activism practice.

PODCAST:Listen to reporters talk about the impact of the new SEC rule

“Some companies are choosing not to even bother with going through the no-action process because they don’t believe there’s a level of success with years past,” Zaba said.

“No-action” letters are essentially green lights for companies to cast aside shareholder proposals without fear of an enforcement action down the line. If the Securities and Exchange Commission rejects a company’s no-action request, the proxy proposal must go to investors for a vote.

The agency has rejected about 30%, or 48 of the 158 corporate challenges to environment- or social-related shareholder proposals for the 2022 proxy season, according to an analysis by the Sustainable Investments Institute (SII), a nonprofit research organization. By contrast, the SEC has granted only 11%, or 17 of the requests to nix proposals from corporate proxies.

By contrast, the SEC allowed companies to keep 49% of proposals off their proxies in the 2021 season and required companies to let shareholders vote on 22% of them, SII found.

About 35% of proxy challenges submitted since September for the 2022 proxy season—which generally runs from April to June— are still awaiting an SEC decision. Most of the challenges were submitted after the SEC issued its policy update. Another 23%, or 37 of the environmental or social-related challenges were withdrawn by companies, typically after a shareholder withdrew their proposal.

More than 566 environmental- or social-related shareholder resolutions have been filed this proxy season, a 13% increase from 2021. More proposals are also getting onto ballots. As of March 31, 343 proposals were pending for votes compared to 194 in 2021, SII found. 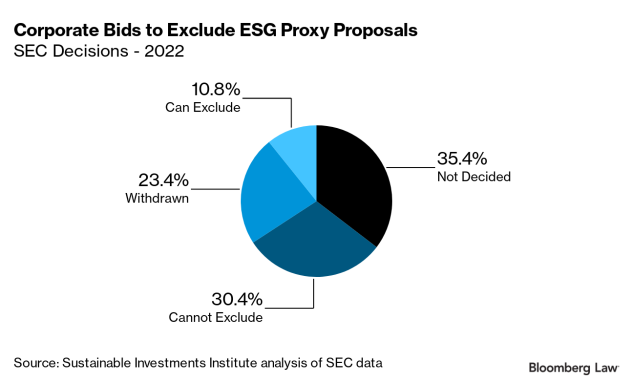 A recent SEC decision on a proposal at marks a notable shift from past policy, said Heidi Welsh, SII executive director.

CVS must allow a vote on a shareholder plan for the company to publicly disclose and adopt a broader employee sick leave policy, the SEC said in a March 18 decision. The proposal, which seeks to shed light on employee wellness, is led by Trillium ESG Global Equity Fund, with co-filers Portico Benefit Services and Vancity Investment Management.

The agency’s response was “an about-face” on decades of prior no-action letter precedent that considered employee benefits as a solid “ordinary business” matter, Welsh said.

A CVS spokesman said the company’s benefit package “includes an appropriate and competitive paid sick leave policy,” and therefore the shareholder proposal isn’t necessary. The company’s annual meeting is scheduled for May 11.

Shareholders are bringing more specific demands than ever before, with some saying they were spurred on specifically by the SEC policy change.

Banks have come under pressure from activists with proposals on how their lending and underwriting practices may contribute to fossil fuel development, said Katherine DeLuca, partner in McGuireWoods LLP’s securities and capital markets practice.

The SEC allowed a proposal that would require board to adopt a policy by the end of 2022 committing it to a lending and underwriting policy that follows international emissions standards.

The commitment would be consistent with fulfilling the International Energy Agency’s “Net Zero Emissions by 2050 Roadmap” and the United Nations recommendations to the G20 Sustainable Finance Working Group for credible net zero commitments.

The SEC said the proposal from shareholder John C. Harrington and Boston Common Asset Management should face a vote at Citigroup’s April 26 annual meeting. The SEC said the resolution doesn’t “seek to micromanage the company.”

Citigroup has urged shareholders to reject the proposal, saying that it’s already committed to “more specific” emissions targets than the proposal seeks. The shareholder plan would impose more drastic cut backs that would hurt the bank and others, the company said.

Sanford Lewis, an attorney and director of the activist investor association Shareholder Rights Group, said he drafted the Citigroup proposal—and several other targeting the financial sector— with the SEC’s November guidance in mind.

“As a result they were able to pass staff review even though they might not have in a prior year,” Lewis said.

A number of climate proposals impacting other industries are awaiting SEC decisions.

Idaho-based electric utility company Idacorp, Inc. is one of many companies facing shareholder proposals to adopt emissions reductions in line with the Paris Agreement’s target of keeping global temperature rise to no more than 1.5 degrees Celsius.

Idacorp asked the SEC to exclude the proposal on the grounds that it has already substantially implemented the demands and already makes public disclosure of its emissions reduction targets.

The SEC hasn’t yet ruled on Idacorp’s exclusion request. Idacorp didn’t respond to a request for comment.

In years past, the SEC would deem a company simply providing “a report” on climate goals as sufficient to meet shareholder demands. The agency didn’t want to “arbitrate whose science is right,” Passoff said.

While favorable votes on proxy proposals generally aren’t legally binding, the SEC has said they can persuade corporate leaders to take action.

Activist shareholders have been encouraged by higher vote percentages than in past years, more attention to ESG issues by investors and a less burdensome process to get measures onto ballots created by SEC policy changes, Lewis said.

“Fewer proposals are being excluded this year than in prior years, and I think it’s a combination of a few reversals but also shareholders adjusting to newer, clearer rules,” Lewis said.

Companies are also changing their tactics by focusing on whether proposals are so specific that they limit management discretion on how to accomplish the goals proponents seek, DeLuca said.

It’s hard to see exactly where the SEC draws the line, as it has issued few determinations on those “micromanagement” arguments so far, she said.

The SEC is expected to issue dozens more no-action decisions as the 2022 proxy season hits its stride in the coming weeks.

Although SEC policy has shifted, the proxy votes themselves will be the true test of investor sentiment—and a potential lightning rod for investors activism if companies fail to act on them, Zaba said.

“A lack of responsiveness can have substantial consequences” through investors withholding votes or voting against board directors in the following year, Zaba said.