There’s no such thing as a lost cause to Constance Donovan.

In her five years as the congressionally-mandated participant and plan sponsor advocate at the Pension Benefit Guaranty Corporation, she’s been a lifeline for flustered pension holders and employers at a federal agency she’s characterized as often effective but prone to being opaque, defensive, and adversarial. She’s revived legal cases by pensioners that had gone cold for years and unearthed documentation that supposedly didn’t exist.

“We get a call, we move on it,” she said of her budding team’s goal of responding to pleas for help within 24 hours. That breaks with a chronic deficiency Donovan points out in annual reports peppered with none-too-subtle subheadings such as “Dying While Waiting for a Benefit Determination.”

Do the Right Thing

Federal lawmakers laid the groundwork for Donovan’s job in the 2012 transportation spending bill (H.R. 4348), carving out room for the independent advocate post in the Employee Retirement Income Security Act (ERISA) of 1974.

Michael Kreps, a Senate Health, Education, Labor and Pension committee alum turned principal at Groom Law Group, said lawmakers created the role in response to business leaders’ complaints about rising premiums and mounting reports that the PBGC and constituents were “butting heads in a way that was counterproductive.”

Donovan describes the first few years inside PBGC as “challenging” and “rough.” The former corporate executive and counselor to multiple public pension plans worked alone back then, chronicling the problems shared by retirees, pension providers, and practitioners in detailed reports to the agency, cabinet secretaries, and select congressional committees.

Donovan’s tenure has been marked by a reluctance to give up on anything.

Mary Jane LaChapelle, a then-sexagenarian widow from North Scituate, Rhode Island, reached out to the New England Pension Assistance Project with questions about survivor’s benefits pertaining to her late husband’s pension plan. The modest manufacturer had come under new ownership, and the current management disavowed any knowledge of a prior pension plan. PBGC had said it couldn’t help because no plan documents were on file.

Three years later, Donovan was able to prove LaChappelle was entitled to $9,000 in missing benefits by tracking down the corresponding summary in archived historic summary plan description (SPD) files that the Labor Department’s Employee Benefits Security Administration was ready to do away with.

“This shows that the government can work for the little people,” LaChappelle said in a PRC press release.

She helped a non-profit group recover approximately $5 million in wasted premium payments to PBGC after its five-year bid for coverage finally fell through. She assisted participants who’d spent nearly a decade trying to track down and file complex financial worksheets while getting the runaround from “multiple contractors regarding the same issue.” And she sewed up a procedural ordeal that snowballed from a disregarded pension funding waiver to a 10-year-fight involving PBGC, the IRS, a U.S. senator, and, of course, countless attorneys.

Over the years, Donovan has urged the agency and its employees to respond faster and communicate better. She’s pushed the agency to follow up on referrals that get bogged down at other agencies, reduce disproportionately high penalties, and curb overzealous enforcement practices.

A half decade later, she said the people who come to her continue to gripe about “confusing and contradictory exchanges” with PBGC staff and endless stumbling blocks “when an issue transcends multiple departments with the agency.”

“Trying to get people to view things from the perspective of another rather than just saying ‘no,’ which is often the easiest thing to do, is very difficult,” Donovan said of her personal mission. 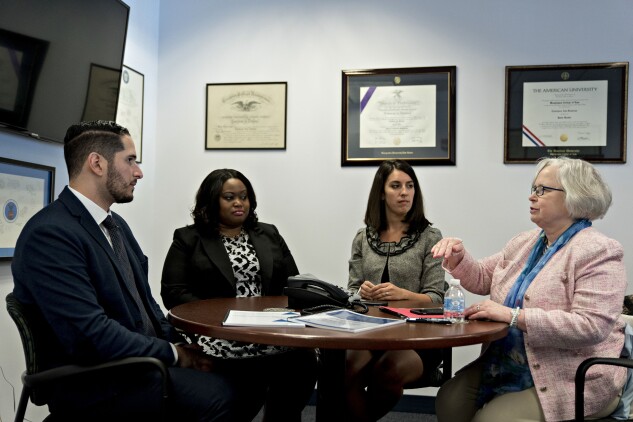 “We get a call, we move on it,” Constance Donovan said of her budding team’s goal of responding to pleas for help within 24 hours. Donovan’s team includes associate Javier Diaz, management and program analyst Lauren Pierce, and senior associate Camille Castro.
Photographer: Andrew Harrer/Bloomberg

Not Always Popular, But Effective

Israel Goldowitz, a former PBGC chief counsel who retired from the agency in January, said his take on Donovan’s criticisms was to always “take it in stride” and “not dwell on controversy.”

“Not to say the agency always agreed with her conclusions. But we recognized that she has a role, and she is independent, and that her report would issue regardless of what the agency might think about it,” he told Bloomberg Law.

Goldowitz commended her for connecting with clientele that might otherwise have given up on the PBGC, hailing Donovan as “one of the major influences for process change in contested matters” while adding that “a great many concerns are resolved at lower levels than the advocate.”

“It wasn’t like anything would be brewing,” he said. “And then immediately the kettle is boiling over.”

Regardless of timing, Butler said Donovan’s appearance definitely upped the stakes. “Whatever the size of the case, she gets involved and instantly senior management is aware of it and there’s a heightened sense of urgency, whether it was needed or not,” he said.

Meanwhile, everyone at PBGC is wary of serving as a teachable moment in Donovan’s annual report. “You didn’t want your case portrayed in there, whether it was a fair characterization or not,” Butler said.

Harold Ashner, a PBGC alum turned partner at Keightley & Ashner in Washington, credited Donovan with fostering a “more cooperative” environment at PBGC—something he said could only be accomplished from the inside.

“She’s partly under the tent and partly outside,” he said, adding that she’s adept at “getting to the right person” and “getting them to focus on the issue.”

Donovan not only acknowledges being a disruptive force, she said in some cases it’s required.

“Often what we find is that the sponsor is not trying to ‘game the system’ to get a better ‘deal’ by involving the Advocate. Rather, the sponsor has often been tied up for months, if not years trying to resolve a dispute with PBGC, and resolution of disputes is definitely within our wheel house,” she wrote in an email.

Any PBGC personnel upset about the added scrutiny should know that more change is coming. Donovan urged PBGC staff to step up their efforts so employers could resume “running their business and not just their pension plan.”

In his annual report, PBGC Director Thomas Reeder noted that the pension insurer paid benefits to 861,000 retirees and lined up future payments for 532,000 plan participants. Overall customer satisfaction ticked up 5 points from last year to 77 percent—“80 or above is considered excellent,” read the footnotes.

“PBGC handles thousands of transactions every day. And they do so flawlessly,” Donovan said.

But when the agency does falter, Donovan warns that negotiations devolve into “an incredibly frustrating, slow, and painful process.”

PBGC staff said Reeder wasn’t available to do an interview about Donovan and her impact. In a written statement, he listed agency-wide changes implemented in recent years, including working with the Employee Benefits Security Administration to identify participants in pension plans that had lost track of them and reducing penalties on plan sponsors for the late payment of premiums.

“We look forward to continuing to work with the Office of the Advocate to advance PBGC’s mission for the benefit of America’s workers, retirees and pension plan sponsors,” Reeder said in the statement.

Donovan declined to take credit for the “exceptional customer experience” goals Reeder unveiled last year, but noted that she did propose a handful of “operating principals” on page 5 of her 2017 report. “We did discuss it with him. But he didn’t exactly involve us,” Donovan said.

Donovan’s latest report features the second installment in a two-part study analyzing the correlation between pension buyout deals and rising PBGC premiums. She also congratulated PBGC for continuing to focus on omitted participants and collaborating with EBSA on the missing participants project in her latest report.

Two recommendations that have carried over since she started at PBGC include retroactively paying interest on excess premium contributions, something Congress approved as part of the Pension Protection Act of 2006, and establishing a national pension plan registry that participants could use to search for long-lost benefits.

And there’s still the matter of getting PBGC staff to keep others in mind during the daily grind.

“We’re getting into issues of process, organization and communication,” Donovan said of the road ahead. “That is difficult change.”