Stacks of U.S. $100 bills are arranged for a photograph.
Photographer: Scott Eells/Bloomberg via Getty Images

Employees with pending lawsuits against JPMorgan, CenturyLink Inc., and American Airlines Inc. are trying to keep the streak alive.

In cases involving thousands or tens of thousands of individual investors, winning class status can sometimes mean the difference between prevailing in court—or negotiating a multi-million dollar settlement—and dropping a lawsuit altogether. Retirement plan sponsors historically fought class status tooth and nail, but in this plaintiff-friendly moment, a handful of high-profile defendants have done the opposite. 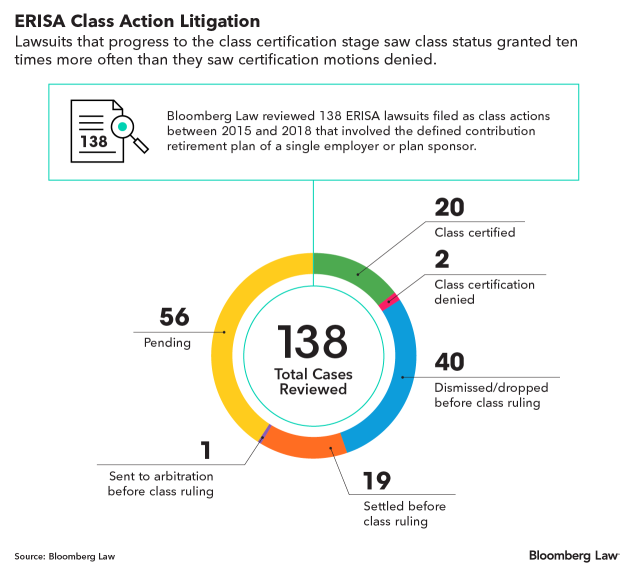 Massachusetts Financial Services Co., a global investment firm managing $428 billion in assets, in January agreed to class action status in a lawsuit involving more than 2,000 investors in the company’s retirement plan. MFS, which declined to comment for this story, was accused of filling the plan with expensive, poorly performing funds.

This development came four months after Columbia University made a similar move in another retirement plan lawsuit. Columbia agreed to class status for portions of the lawsuit but objected—unsuccessfully—to class treatment on other claims. Human resources provider Insperity Inc. consented to class status in a similar case in 2017.

Fighting class certification is an “expensive proposition” that may not always be worth it to an employer surveying the current legal landscape, Carl F. Engstrom, a partner with Nichols Kaster PLLP in Minneapolis who represents investors in ERISA class actions, told Bloomberg Law.

If more defendants are considering agreeing to class status, it stems in part from the “maturation of the practice area,” Engstrom said.

For example, MFS’s 2019 decision not to oppose class status is in stark contrast with how another high-profile ERISA defendant handled a 401(k) lawsuit just two years earlier.

in 2017 responded to allegations of 401(k) mismanagement by hiring an expert witness to oppose class certification in the district court. After losing the issue, the bank tried—unsuccessfully—to appeal to the Second Circuit, with the help of an amicus brief from the U.S. Chamber of Commerce.

Most defendants still oppose class certification, but there are case-specific considerations that could lead some defendants to consent, said Meaghan VerGow, a Washington-based partner with O’Melveny & Myers LLP who defends employers in ERISA suits.

For example, an employer might consent to class status if it believes it has strong defenses to the underlying lawsuit and wants to cut off future individual lawsuits involving the same allegations.

“If you think you’re well situated to prevail in the end, then your goal may be to embrace class treatment so that you can resolve these issues finally and for all time,” VerGow said.

Other ERISA class suits, including those targeting 401(k) service providers and record keepers, may be less likely to lead to class status by consent. These are the “paradigmatic example” of cases most defendants view as unsuitable for class treatment, because they involve hundreds or thousands of plans that have distinct relationships with the defendant, VerGow said.

Finally, agreeing to class status can help streamline costs and clarify issues on which the parties agree, VerGow said.

Avoiding a class status fight is good for plaintiffs, too, Engstrom said. It speeds things up, simplifies things, and is better from a “practice management” standpoint for plaintiffs’ firms that take cases on a contingency basis, he said.

Though a few high-profile employers have charted a different path, the vast majority of companies continue to fight class status in ERISA cases.

Each defendant has opposed the pending motions for class certification, with the exception of National Indemnity, which has until March 4 to file a motion in opposition.