“While many of these measures have been difficult, it is the right thing to do for the business,” Hayes said on a May 7 with analysts as he outlined billions of dollars in cost reductions.

Just weeks later, the company tweaked terms for stock awards issued to Hayes and a large group of other managers, instantly boosting the value of their unvested awards by more than $100 million, according to calculations by Bloomberg News. Raytheon didn’t specify how much of the windfall would go to Hayes and his top lieutenants, but the figure is likely in the tens of millions of dollars.

Behind the gains, which have yet to be realized, lies the complex math that determines how equity awards are treated in large corporate transactions -- in Raytheon’s case, two spinoffs and one merger all closing on the same day. Further complicating the situation: extreme stock volatility caused by the pandemic.

The change was made to ensure employees aren’t short-changed by big swings in the stock price, according to a Friday. Raytheon said it was reviewed and authorized by a committee of independent directors and that it’s meant to preserve employee retention and morale, as well as the company’s reputation as a “superior employer.” In previous filings, the company said it reserved the right to retroactively make certain changes to equity awards as a result of the transactions.

“They may have had the right but the issue is whether exercising that right breached an obligation to the stockholders,” said James Cox, a Duke University professor who specializes in corporate and securities law.

, a spokeswoman for Raytheon, declined to comment beyond the filing.

About 3,900 current and former employees, many of them working below the executive suite, hold equity awards that will be affected by the new calculation. But companies tend to reserve the largest awards for those in leadership roles.

The change followed the completion of a series of deals that Hayes has overseen in recent years.

An accountant by training, Hayes was named CEO of manufacturing conglomerate United Technologies Corp. in 2014 after serving in various finance positions. In late 2018, the company announced that it would spin off two major divisions -- the Otis elevator and Carrier air-conditioner businesses -- into individual publicly traded firms so it could focus on aerospace and defense. Last June, the company struck a deal to merge with weapons manufacturer Raytheon Co.

The completion of the spinoffs and merger were announced April 3. The combined company adopted Raytheon Technologies as its new name, and its shares began trading that day.

For Hayes and other Raytheon leaders, the following few days were crucial. Every move in the stock price would have an impact on one of their key benefits: Equity awards worth millions of dollars.

When public companies combine, it typically falls on a group of accountants and lawyers to figure out what to do with the troves of unvested restricted shares and stock options the two executive teams typically hold. Awards from the predecessor firms are typically canceled and replaced by fresh ones issued by the new entity, with similar terms and conditions.

Figuring out exactly how many new securities should be issued for each old one can be tricky given the fickle nature of stock prices. So companies resort to calculating a conversion ratio that’s based on the price over a period of a few days.

Earlier this year, Raytheon disclosed that it would use the average price on the fourth and fifth day that its new shares traded.

The measurement period coincided with a stretch of unusual volatility in U.S. equities. From Raytheon’s first day of trading on April 3 through its fifth day on April 9, the S&P 500 rose 10%, rebounding from the sharp drop sparked by shelter-in-place orders and concerns about the impact of the pandemic on the U.S. economy.

Raytheon, which had closed at $49.93 on its first day of trading, also surged. On the fourth and fifth days, it closed at $62.62 and $64.71, respectively. As a result, the two-day average used to calculate how many new shares executives would get came out to about $63.67 -- more than 25% above where the stock had been just days earlier. 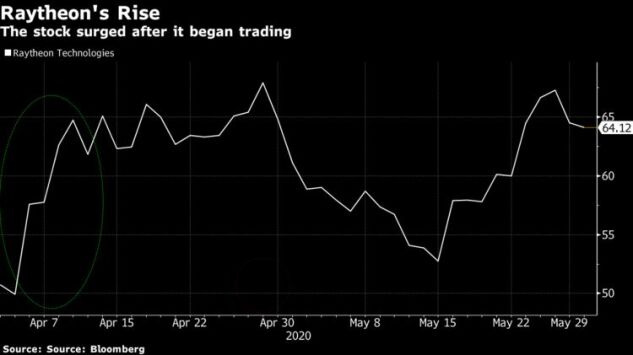 The increase, Raytheon said Friday, caused “material discontinuity” between that figure and the share price of United Technologies on its last day of trading. So it opted to retroactively change the terms of that calculation. Instead of using the $63.67 figure, the company will use the opening price on its first day of trading, which was $51.

It “preserves the company’s ability to continue to treat employees and retirees fairly in the conversion process,” the company said.

For Hayes and others who hold unvested equity awards, the lower price is much better. It means they will receive more new shares and options in exchange for their old award than if the higher figure had been used. And for those who own stock options or so-called stock appreciation rights, the benefit will be double, because the adjustment will also lower the strike price of the new securities.

The boost comes at a tough time.

Hayes said May 7 that the company was cutting about $2 billion in costs and making further efforts to conserve billions of dollars in cash, including furloughing an undisclosed number of workers, deferring merit increases and cutting pay for some salaried employees in the second half of this year.

Hayes will take a 20% salary reduction. The cut won’t affect his equity awards.

To contact the reporter on this story:
in New York at amelin3@bloomberg.net