A recent move by the Trump administration makes it easier for retirement savers to invest in private equity.
Scott Eells/Bloomberg

Tapping into the trillions of dollars U.S. workers have set aside for retirement—funds safeguarded by the Employee Retirement Income Security Act of 1974—is no small feat for any asset manager.

So when the Employee Benefits Security Administration partially opened the door to 401(k) investments in private equity in a June 3 information letter, it was cause for celebration among British-based Pantheon Ventures LLP and Swiss-based Partners Group. The “frenemies”—as Pantheon private wealth director Doug Keller characterized the odd coupling of the one-time business rivals—teamed up to request the letter.

Keller said a “broad coalition of investor-oriented partners” contributed to the concerted effort over the course of nearly a decade.

That includes Groom Law Group, the boutique ERISA firm that represented Pantheon and Partners in requesting the letter. Influential trade groups spread from the District to the Big Easy also played an important role in a big win for private equity.

EBSA said in the letter that 401(k) plan sponsors can offer private equity investments in limited doses without running afoul of federal law. The agency prescribed rolling those investments into diversified, professionally managed products such as self-adjusting target date funds to minimize risk.

Employer-managed pension plans have for decades used alternative investments, such as private equity and real estate, to raise funds. Some policy professionals have been hesitant to open up 401(k)s to the same investments because those plans put the risk on individual retirement savers.

Litigation-wary plan sponsors have understandably shied away from jeopardizing the roughly $6 trillion in assets the Investment Company Institute calculated 401(k)s held at the end of 2019. Class action lawsuits alleging mismanagement of fees and breach of fiduciary duty continue to wind their way through the courts.

“We spoke to a number of private investment firms with governmental relations offices, and Groom was consistently recommended,” he said of their coming together in 2017.

Attorney Theodore Groom co-founded the original firm in 1975. In the four decades since, the niche operation has welcomed attorneys prized for their familiarity with and connection to the power centers of retirement policy. 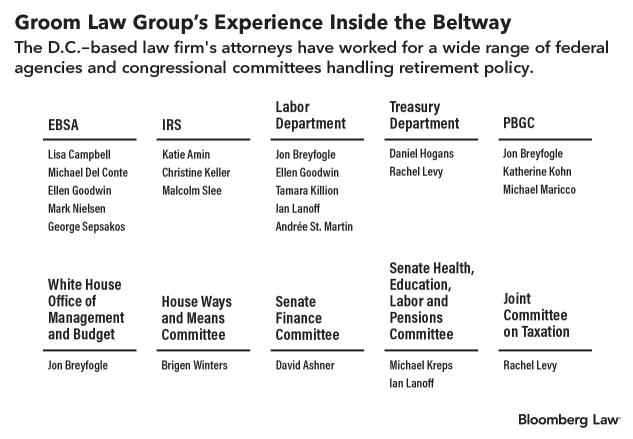 Pantheon and Partners Group found in Groom principal Jon Breyfogle a seasoned veteran who worked the levers of government while at OMB, Labor, and the PBGC.

Breyfogle told Bloomberg Law that building the case for private equity involved connecting the dots of past alternative investment wins.

“I think the letter follows a fair amount of DOL precedent in how to analyze newer types of investment options and strategies,” he said. Breyfogle cited guidance about derivatives, annuities, and “liability driven investment strategies” that have trickled out of the executive branch during previous administrations.

Having Securities and Exchange Commission Chairman Jay Clayton lend his support also didn’t hurt. Clayton urged EBSA “to address uncertainties regarding ERISA that may be impeding plan fiduciaries from considering private equity investment opportunities as a way to enhance retirement savings and investment security for American workers,” according to the letter.

Private equity supporters also cranked out a steady stream of research papers over the past decade to help make the case.

It was only a matter of time before private equity proponents followed target date funds and income-replacing annuity contracts down the path to general acceptance, observers say.

“This is the outcome of a lengthy and collaborative process between all sorts of stakeholders, including plan sponsors, asset managers, academia and EBSA,” said Joshua Lichtenstein, a partner at Ropes & Gray LLP in New York who advises asset managers and employee benefit plans.

Here’s how they worked to build the case for prying open 401(k)s:

CIEBA Executive Director Dennis Simmons notes that his members had been discussing internally how to push private equity forward dating back to 2016. Two years later, he said the group decided it was “an issue on which we wanted to affirmatively engage with regulators.”

Despite cheers from private equity, some observers have pointed out that the letter has its limits: It doesn’t have the legally binding effect of a law or regulations.

“They didn’t change the law but this is all of the guidance that we’re going get at this point,” Lichtenstein said. “While the law hasn’t changed, being able to point to this letter is helpful.”

CIEBA’s Simmons said it was important to have the government go to bat for private equity. The letter “helps diminish the perception, brought on by decades of often-opportunistic lawsuits narrowly focused on investment expenses incurred by DC plans, that investing in alternatives could, in itself, lead to increased litigation risk for fiduciaries,” Simmons said.