Obsessed with checking the plummeting value of your 401(k)? Spending the government shutdown hunting for a new/more reliable job? Check this space every Friday to keep up with the latest water-cooler talk.

Job seekers still view the United States as the land of opportunity. But the secret’s out that climbing the corporate ladder often requires trade-offs.

Respondents to global banking leader HSBC Holdings’ Expat Explorer survey have no illusions about what it takes to get ahead in the U.S.

Roughly two-thirds of 1,300 expatriates polled said their earning potential here is much greater than in their native land—as long as they’re willing to pay the price. 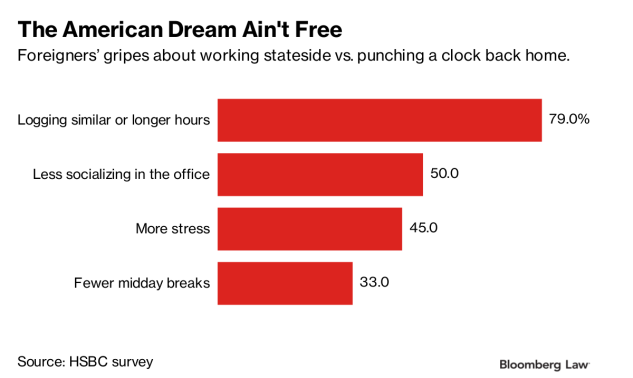 Raking in the bigger bucks keeps a good deal of these folks on edge. Nearly two out of five respondents (39 percent) reported feeling like they have less job security than in the past.

Well, Which Is It?

Aspiring retirees seem to be of two minds when it comes to how they’ll spend their golden years.

Respondents to a recent survey by Kiplinger’s Personal Finance floated retirement plans and financial goals that may be in conflict with one another.

In terms of plans, the top five things poll takers said they are most excited about once they quit working include traveling, slowing down/relaxing, restoring flexibility to their schedules, spending more time with family, and recreation.

On the financial front, expenses they’d like to cut back on include housing, gifts, and dining out.

Only time will tell if these prospective jet-setters wind up on an unsuspecting relative’s doorstep for a long overdue visit. Just don’t expect them to show up with presents or to spring for a celebratory dinner.

Need to get away from it all? Travel site Cruise Critic reports that the peak time to book a leisurely vacation is just a few days away.

“When it comes to booking a cruise, the traditional so-called “Wave Season” actually peaks in late January and remains strong through March. Then, cruise bookings slow down during the late spring and summer months,” analyst Danny DeMello said in a press release.

Should the government shutdown stretch on much longer, our confidence is medium frustrated federal workers may skip town for friendlier shores.