The Match.com website is demonstrated for a photograph on an Apple Inc. iPhone in Washington, D.C., U.S., on Sunday, Jan. 30, 2017.
Andrew Harrer/Bloomberg via Getty Images

The way Chairman and Chief Executive Officer tells it, he hadn’t seen founder in years and, even though they were now on opposite sides of a multibillion-dollar trial, he wanted to say hello.

What happened next, during a break in Blatt’s testimony Monday, injected fresh drama into the question of whether Match and its controlling shareholder, , cheated Rad and other Tinder executives out of billions of dollars by low-balling the dating app’s 2017 valuation by $10 billion. 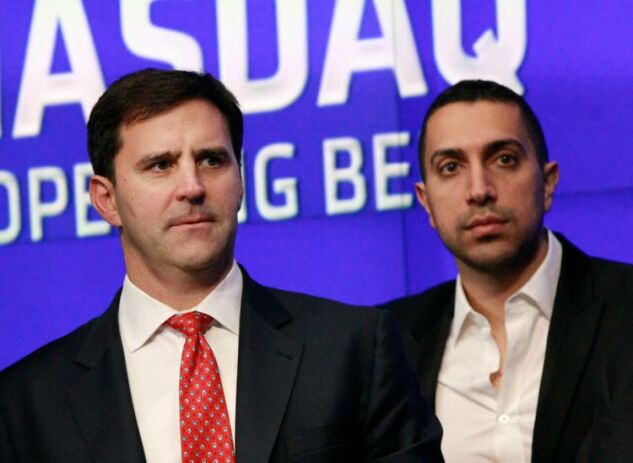 Greg Blatt and Sean Rad at the Nasdaq MarketSite in New York in 2015.
Photographer: Yana Paskova/Bloomberg

“He came down and grabbed me very hard,” Rad told New York state court Judge . “I went a little blank, but that was absolutely designed to intimidate me.” Rad’s lawyers said Blatt “crossed the line” by squeezing and pulling their client’s arm, while remarking that he had been “lifting,” but that it was in keeping with how the CEO had bullied and intimidated others during the valuation process.

Blatt told the judge he merely reciprocated when Rad put out his hand for a “fist bump” and saw the gesture as an “indication of some level of civility” despite the dispute. In a statement issued Tuesday, Match accused Rad and his co-plaintiffs of trying to “turn a breach of contract case into a circus by smearing witnesses rather than focusing on the facts.”

The judge declined to allow Rad’s lawyers to question Blatt about the encounter in front of jury, but he warned Blatt not to make further contact with the plaintiffs or their lawyers.

The exchange is illustrative of the combative nature of the trial, which just entered its third week and is expected to continue through Dec. 3. The defendants claim the Tinder executives cashed out their options for more than $700 million, and Match said in its Tuesday statement that Rad received more than half of that.

“Sean Rad was not satisfied with his $400 million, so he’s come back for more and will stop at nothing to get it,” the company said.

On the stand Monday, Blatt denied trying to steer the $3 billion valuation, which he said was similar to the amount Wall Street analysts had estimated. Rad claims Tinder was actually worth $13 billion at the time.

“Every quarter they published reports,” Blatt said of the analysts. “They valued Tinder at $3 billion, the same thing that the banks did after I went in and supposedly told them all these negative things.”

Blatt said he and Rad had worked together for many years during the early years of Tinder, which was developed during a hackathon at an incubator partially owned by IAC. While they didn’t always agree, they had “developed a certain amount of trust” although they “drove each other crazy,” Blatt said.

The two had negotiated an agreement in 2014 giving Rad and a group of early Tinder employees 20 percent of the upstart company. But as the time came to assess the stake in 2017, Rad hired to advise him on the process, and the relationship soon broke down, Blatt said.

Rad and the Jefferies bankers “were trying to play hardball” and “set a bunch of traps” in order to guide the banks that had been hired to assess Tinder to peg its worth at $4 billion or more, rather than its actual value as a public company, Blatt said.

“It was clear to me at that point that the quest to find the right answer for how much Tinder was worth had been abandoned and the mission now was to get to that $4 billion by any means possible although those means would wreak havoc on the company,” Blatt said.

, a litigation analyst with Bloomberg Intelligence, gave Match and IAC a 75% chance of winning the case. He said the companies had shown the banks a “more bearish” view of Tinder’s prospects than earnings calls suggested, while Rad and his co-plaintiffs hadn’t shown any clear examples of Match executives withholding information that would’ve adjusted the valuation upward.

“Although there was some drama in the courtroom halls, the jury itself saw fewer fireworks,” Schettenhelm said. “Match’s defense has mostly held.”

IAC founder also testified last week, denying any attempt to undervalue Tinder. He also defended Blatt when asked about late Chairman ’s opinion of the executive. Welch “thought he was a bad apple,” Diller said. “I disagreed with him.”

(Updates with comment from analyst starting in 14th paragraph.)