Lawsuits against companies that put their own financial products in their employees’ 401(k) plans have garnered more than $430 million in settlements since 2015, a Bloomberg Law analysis shows.

Employees at , , , and dozens of other financial companies have challenged this practice over the past decade. They say the mutual funds and other investment products that their employer sells to outside investors don’t belong in their employee 401(k) plans, because they perform worse than funds from competitors, charge high fees that benefit their employers, and eat into their retirement savings.

Most cases have seen success in the early stages of litigation, with judges finding these allegations state a claim under the Employee Retirement Income Security Act. In many instances, plaintiffs’ early courtroom victories have led to multimillion-dollar settlements: Reliance Trust Co. and each signed deals worth nearly $40 million, while , Fidelity, , and have reached settlements valued at more than $20 million each.

In more than two dozen cases, settlements range from $3 million to nearly $40 million, with an average deal of about $15 million. 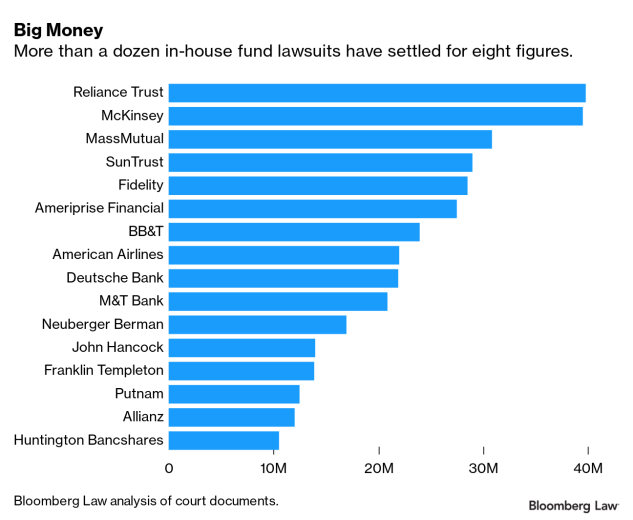 These deals are likely to keep coming. Just this week, John Hancock signed a $14 million settlement to end litigation over the in-house funds in its 401(k) plan.

Similar cases are pending against , , , , and others, with new suits targeting Russell Investment Management and in just the past month.

‘Eat Your Own Dog Food’

One explanation for this rash of multimillion-dollar settlements is how successful the cases have been at the outset. Courts have been reluctant to dismiss these cases before the parties engage in discovery, Danielle Chattin, a senior associate and litigator with King & Spalding LLP in Atlanta, told Bloomberg Law.

“These cases have a built-in hook, because there’s an inherent potential for conflict of interest when a plan sponsor offers its own product in its plan,” Chattin said.

The lawsuits can reach employers’ credibility, because the central claim is that “you’re forcing your employees to eat your own dog food,” Mark G. Boyko, a partner and plaintiff-side litigator with Bailey & Glasser LLP in Missouri, said.

“There’s a huge reputational risk associated with going to court and litigating whether your mutual funds are suitable for retirement savings,” he said.

Courts also have been sympathetic to the fact that 401(k) plan participants lack information about how their plans are managed and may not be able to make their case without engaging in discovery.

“Add all this up, the fact that more cases are surviving dismissal, the prospect of lengthy discovery and potentially expensive expert discovery—I think that’s why we’re seeing more big dollar settlements,” Chattin said.

Not Out of the Woods

Financial companies may remain litigation targets as long as their in-house funds are offered in employee retirement plans—regardless of whether they previously prevailed in court or negotiated a settlement.

was sued over its 401(k) funds in 2016, and it won in federal district court and on appeal. But in 2020, the banking giant was sued again over these practices, and a federal judge allowed the case to advance, noting that the newer complaint included more meaningful benchmarks by which to judge the funds’ performance.

Companies sued in the past “aren’t out of the woods” in terms of being repeat litigation targets, Boyko said.

Some companies have been investigated by plaintiffs’ firms over this practice multiple times before their in-house funds performed poorly enough to warrant bringing a lawsuit, he said.

“At any given time, there are some employers who have their own funds in the plan and those funds happen to be performing well enough to avoid litigation, but that’s not always going to be the case,” he said.