Workers who sued their employers under the federal law that governs employee benefits raked in $529 million in 2017 through class settlements in more than 30 cases.

None of the deals agreed to in 2017 was quite as splashy as the $352 million settlement Providence Health workers submitted for court approval in 2016, but the year’s biggest settlements were hefty nonetheless. Hospital workers who challenged Franciscan Missionaries of Our Lady Health’s pension plan scored 2017’s largest ERISA settlement (nearly $126 million), and Bon Secours and JPMorgan agreed to $98.3 million and $75 million deals, respectively.

Bloomberg Law analyzed more than 30 class action settlements under the Employee Retirement Income Security Act that were submitted for preliminary court approval during 2017. Not every deal included a cash payment, but those that did carried an average value of about $21 million.

“While the types of cases with big settlements have shifted somewhat, I would say it shows not an explosion of litigation by any means, but it shows that the area remains strong. There’s still some very good results being achieved by plaintiffs,” Engstrom said.

“What struck me in 2017 was how frequently you saw $25 million here, $75 million there—and against very big-name defendants,” Rosenberg said. “It suggested to me the maturation of these theories of liability in the sense that both sides now agree on the parameters of what they’re talking about. They’re speaking the same language in discussing the claims, and the theories of liability aren’t so novel and untested that you would just fight them because you don’t yet have some idea of what a court might do with the theory.”

“2017 also indicated that it’s not going to be a bonanza or free-for-all for plaintiffs’ lawyers,” Engstrom said. “The courts are taking a close look at each case at pretty early stages and are willing to dismiss claims. Some of the doom-saying that you heard from the defense bar in the past two years about waves of litigation and massive settlements hasn’t been borne out.”

Six settlements reached in 2017 involved hospitals accused of running their pension plans as ERISA-exempt church plans. This issue, which began simmering in the lower courts in 2013, came to a head with the U.S. Supreme Court’s June 2017 decision in Advocate Health Care Network v. Stapleton, which allowed religiously affiliated hospitals to run church plans exempt from ERISA’s funding, disclosure, and insurance requirements. Workers had challenged this practice, in part because they say it caused plans to become underfunded by tens or hundreds of millions of dollars.

“The church plan settlements were seemingly brokered without the benefit of the Supreme Court’s ruling in Advocate Health and, that said, it remains to be seen how the ruling will impact the pending litigations (although certainly the opinion has significantly tipped the balance in favor of defendants),” Ortelere added. 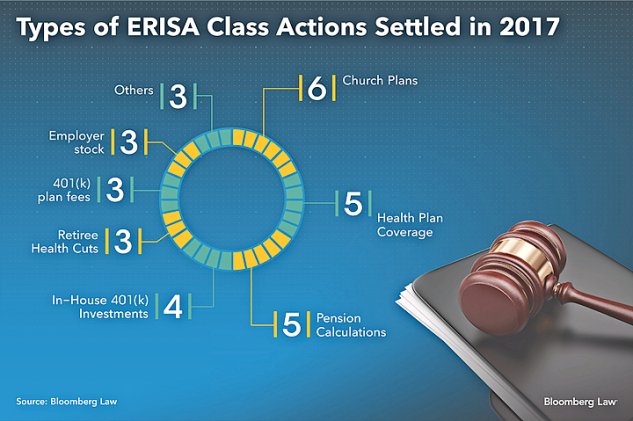 The four church plan settlements that included a monetary component had an average value of more than $66 million.

These cases tended to lead to smaller settlements. The largest deal involving health plan coverage was a $5.25 million settlement with Health Care Service Corp. in a case over residential mental health treatments. Cigna signed a $2.75 million deal over mental health coverage in March.

Although these cases tended to see more modest cash payments, they also frequently included other types of relief not reflected in the size of the settlement. For example, several pension settlements included a requirement that workers’ benefits be recalculated using more favorable criteria. And several disputes over health plan coverage led to settlements that required insurers to lift coverage restrictions or sometimes reprocess claims that were previously denied.

The recent flurry of litigation against financial companies that put affiliated investment products in their 401(k) plans led to four class settlements in 2017. More than two dozen financial companies—including JPMorgan Chase Bank, Charles Schwab Corp., and Morgan Stanley—have been sued by workers who say the proprietary funds in their 401(k) plans allow their employers to unfairly profit at the expense of their retirement savings.

The average proprietary fund settlement was about $10.5 million in 2017. American Airlines reached the largest deal ($22 million) in a case challenging the American Beacon funds in its 401(k) plan. Allianz, TIAA, and New York Life reached class settlements ranging between $3 million and $12 million.

More proprietary fund settlements may be coming down the pike in 2018. This litigation effort began in earnest in 2015, and about 20 cases remain pending at the district court level. The first appellate decision in this line of cases could be coming in 2018, as well, with a case against Wells Fargo pending in the U.S. Court of Appeals for the Eighth Circuit.

The attorneys’ fees awards received by class counsel in 2017 weren’t quite as high as some of the settlement figures would suggest.

Rodriguez Tramont & Nuñez PA, a Florida-based firm with a broad array of practice areas, scored 2017’s largest fee award to be approved by a judge: $8.75 million for obtaining a $25 million settlement in a case against Merrill Lynch (35 percent). St. Louis-based Schlichter Bogard & Denton won $5.025 million in fees in its $16.8 million deal with Northrop Grumman (30 percent). 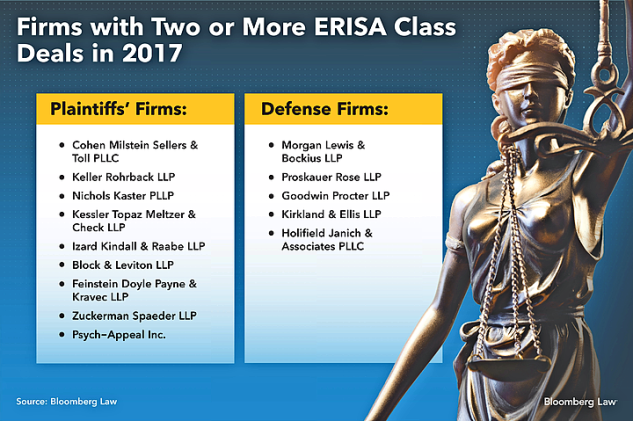 Other firms have negotiated significant fee awards that are still awaiting court approval. The legal team of Schneider Wallace Cottrell Konecky Wotkyns LLP and Law Offices of Michael M. Mulder stand to receive up to $25 million in fees if a federal judge approves the $75 million deal they negotiated with JPMorgan over the company’s stable value fund (33 percent). Nichols Kaster PLLP and Kendall Law Group PLLP will receive $6.6 million in fees for their $22 million deal with American Airlines, if a federal judge approves their fee request (30 percent).

Interestingly, the largest settlements of the year didn’t lead to especially large fee requests or awards. 2017’s biggest class action settlement—the $126 million deal signed by Franciscan Missionaries—resulted in a fee request of only $1 million (1 percent). This pattern of large settlements and modest fee awards could be seen in other church plan cases, too: The biggest attorneys’ fee request in a church plan case was $2.5 million, which came in the $42.5 million deal with St. Joseph’s (6 percent).

And one of the year’s biggest settlements—a $23 million deal between Century Aluminum and retirees who challenged cuts in their health benefits—came with no fee award at all. In their motion for settlement approval, the retirees’ lawyers said they wouldn’t seek an award of attorneys’ fees or expenses.

On the plaintiffs’ side, the legal team of Cohen Milstein Sellers & Toll PLLC and Keller Rohrback LLP secured four settlements in church plan cases, including three of the year’s four biggest deals. Cohen also was part of the legal team that negotiated a $25 million deal with Wawa over the company stock in workers’ retirement plan.

A series of lawsuits challenging prominent universities and their retirement plans—often called 403(b) plans—could see some resolution in 2018, whether through settlements or otherwise. The cases—which target more than a dozen schools, including Cornell, Columbia, Duke, Emory, and New York University—were first filed in 2016. So far, none of the cases has settled, and only one has been dismissed outright by a federal judge.

“Given the skyrocketing number of lawsuits challenging the administration of 401(k) and 403(b) plans, the sheer volume of complaints suggests that there will no doubt be some settlements in the year to come,” Morgan Lewis’ Ortelere said. He added that the dollar amount of the deals can’t be predicted, “given the somewhat uncertain state of the case law, the varying size of the plans involved, and the disparity in the facts presented.”

“It’s too early to say what will happen there,” Engstrom said. “We don’t even know what its final version will look like or whether it will even exist.”

Many of the rule’s key provisions were scheduled to become applicable in January 2018, but that deadline was recently pushed back to July 2019 so that the agency can reevaluate the rule, as ordered by President Donald Trump.

Rosenberg had a somewhat different take. He said class litigation over annuities and rollovers under the fiduciary rule “may be coming down the pike sooner rather than later.”

Another potential target for ERISA litigation in 2018 may be retirement plans that allow service providers to dictate their investment lineups. According to Engstrom, recent studies have shown that underperforming funds affiliated with a plan’s service provider are less likely to be removed from a plan’s lineup.

Though a number of recent cases have involved allegations of self-dealing against the financial service company employers that offer their own funds in the company 401(k), that litigation has hardly touched plans that primarily or exclusively offer investments affiliated with their service providers, Engstrom said.

To contact the reporter on this story: Jacklyn Wille in Washington at jwille@bloomberglaw.com

To contact the editor responsible for this story: Jo-el J. Meyer at jmeyer@bloomberglaw.com