The workers’ amended lawsuit also provides sufficient facts to state a claim for breach of fiduciary duty and for failure to defray plan expenses under the Employee Retirement Income Security Act, Judge John A. Ross of the U.S. District Court for the Eastern District of Missouri held March 27.

Ross’ ruling follows the same rationale he used one year ago when he refused to dismiss the workers’ original lawsuit. The workers’ allegations concerning the offering of certain affiliated mutual funds with excessive fees and underperforming returns and their allegations concerning excessive fees are the same allegations pled in the original lawsuit, Ross said. Likewise, the arguments Edward Jones advanced in support of dismissal are virtually identical to those raised in its original motion, Ross added.

The decision is another victory for financial institution employees challenging their employer’s decision to add in-house, high-fee, underperforming mutual funds in their 401(k) plans. So far more than 20 companies have been hit with similar lawsuits. 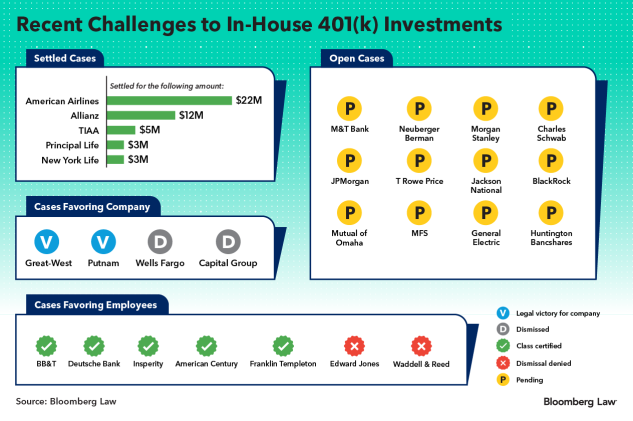 In its attempt to get the lawsuit tossed, Edward Jones relied on a ruling that dismissed a similar lawsuit against Wells Fargo. Edward Jones argued that the workers failed to plead additional facts showing that the fiduciary’s decision was based on financial interest rather than a legitimate consideration. The company also said the workers didn’t include facts suggesting that the choice of higher-cost affiliated funds was the result of flawed decision-making.

Ross rejected the argument. The workers’ allegations were sufficient to raise an inference of disloyalty and imprudence, he said. They alleged that record-keeping fees nearly tripled over the class period while market rates for these services declined, and that the total weighted average expense ratio of the plan was high compared to market rates.

Ross further rejected Edward Jones’ argument that the workers improperly grouped together all defendants without asserting that each had a particular role in the misconduct alleged. The workers sufficiently detailed and differentiated the claims asserted against the separate defendants, Ross said.

To contact the reporter on this story: Carmen Castro-Pagan in Washington at ccastro-pagan@bloomberglaw.com