Employers, wary of a potential jump in medical inflation, hope to rein in costs in the short term while keeping employee expenses down as they roll out their health coverage plans for the 2023 open enrollment season.

“Employers didn’t necessarily have a significant amount of pressure around health-care costs” in 2022, Sally Welborn, executive director of advisory services for the Employer Health Innovation Roundtable, said in an interview. Instead, “The pressure’s going to happen in 2023 for 2024.”

Interest in controlling expenses without shifting more costs to employees is heightened “because we are in an inflationary period” and there’s a potential for a recession, Welborn said. Employers are asking, “What can we do that will have immediate impact with the least abrasion to employees and the most impact in the short term?”

Family premiums for employer-sponsored health coverage stayed flat in 2022, according to the Kaiser Family Foundation. But the $22,463 average cost is nevertheless up 20% over the past five years compared with 17% in overall inflation during that period. Current inflation could lead to higher costs in 2023.

Employers reacting to current or future rising health-care costs are “looking for things that can give more immediate payback, as opposed to some of the things that we might have invested in in the past that have a much longer ROI [return on investment] time frame,” she said.

Welborn previously was senior vice president at Walmart, where she helped create the company’s innovative centers of excellence program. The program provides employees with care at efficient high-quality medical centers.

The types of initiatives employers are considering include going out to bid for their health insurers and pharmacy benefit managers to try to get lower prices, Welborn said.

In contrast, benefits such as support for caregivers, for which there has been employer interest in the past two years, “may not be top of mind now” because the return on investment is longer term, she said. 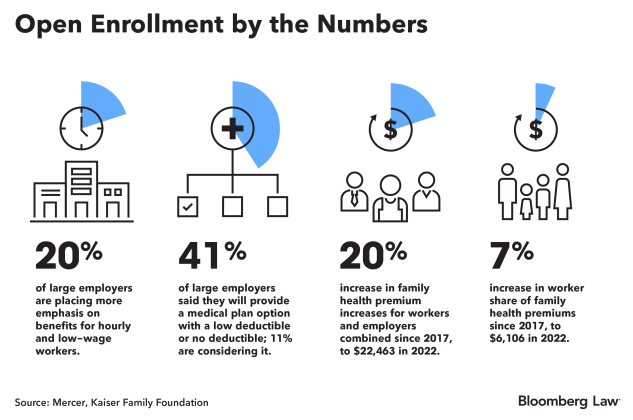 There is also “renewed interest” by employers on eliminating fraud, waste, and abuse, Welborn said.

“There are new techniques and new tools using sophisticated data analytics through some of the external vendors to identify providers who are abusing the system,” she said.

Remedies can include removing those providers from networks if they don’t improve, trying to “nudge employees to better providers,” and requesting repayment in some cases, she said. “That’s not the best alternative because it usually creates abrasion” but employers are more willing to do that, she said.

At Brakebush Brothers Inc., a chicken processor based in Westfield, Wisc., the company is creating a new tiered health plan in 2023, Dan Ludwig, director of benefits and safety, said in an interview.

Brakebush Brothers, which has about 2,400 people in its health plan, has previously been offering centers of excellence for common procedures such as joint replacements or imaging services.

The company faces a possible 5% cost increase in 2023, Ludwig said. “We’re at a point now where we’ve reached all of our savings potential with the methods that we’ve been using so far,” he said.

In 2023 the company’s plan will include out-of-pocket cost incentives for employees to use NOVO Health providers that are more efficient, Ludwig said. NOVO Health represents independent physicians who offer bundled, all-inclusive prices to employers for medical procedures, such as orthopedic surgeries.

“If we can do a good job marketing this and steering people to do this, I think we’ll actually see a decrease” in costs, he said.

Employees can save more than $3,000 in out-of-pocket costs for joint replacements, and $1,500 for magnetic resonance imaging scans under the plan, and the number of procedures for which the lower costs are available will increase, he said.

Premiums paid by employees will rise in 2023 after declining in 2022, but deductibles will be reduced by $500 for employees who choose lower-cost providers, Ludwig said.

Mental health has been increasingly important as an employee benefit, especially in the wake of the Covid-19 pandemic.

“Mental health is a top priority. It’s not going away,” Erin Terkoski Young, a senior director of benefits consulting in WTW’s health, equity and well-being practice, said in an interview.

Digital coverage is among the strategies for employers, Young said. That includes clinical and nonclinical care, she said. Telephone apps or other digital tools that help employees manage stress are among the nonclinical services provided, she said.

She cited mental health startups such as Spring Health, Lyra, and Modern Health, which “companies are looking at in terms of enhancing employee assistance programs,” she said.

Other types of digital emotional support tools, such as myStrength and meQuilibrium, provide “mindfulness-driven resiliency activities” and support for workforce skill-building, she said.

In addition, some employers are considering allowing employees to use sick leave for mental health days, Young said.

“There’s a lot of stigma around asking for time off, feeling like you have to justify why you are stepping away from the desk,” she said.

A recent WTW survey of employers with 8.2 million workers found that the number of employers that intend to offer designated mental health days could triple from 9% currently to 30% in the next two years.