Workers clean up and check plant tags after transplanting marijuana plants to grow in a greenhouse at the Los Suenos Farms facility in Avondale, Colorado.
Photographer: Matthew Staver/Bloomberg via Getty Images

Cannabis employers have been keeping their workers happy by offering typical benefits packages as well as more nontraditional perks such as yoga, catered lunches, daily smoothies, and even 4:20 Fridays.

The cannabis sector has been growing steadily in the past decade, and employee extras have been increasing, too. Starting from scratch in a new sector, companies struggled with the burdens of making a business profitable and with the stigma associated with cannabis—an illegal drug under federal law. But as with any other more traditional business, employers wanted to make sure their workers were taken care of and stayed for the long run.

The industry employs between 165,000 and 200,000 workers in the U.S., according to MJBiz Daily’s 2017 report. To put this in perspective, there are now more marijuana industry workers than there are bakers or massage therapists in the U.S., the report says. Total market sales are expected to exceed $24 billion by 2025 and the industry will create almost 300,000 jobs by 2020, according to a study by New Frontier Data.

Some companies offer extravagant vacation packages, reimbursement for vehicles, flexible time, product discounts, and massages, he said. One company in Denver has a smoothie cart that goes through the hall every morning, while another offers what it calls a 4:20 party every Friday, when offices close early so workers can relax and play table tennis, Mason added. It is similar to a tech startup culture, Mason said. 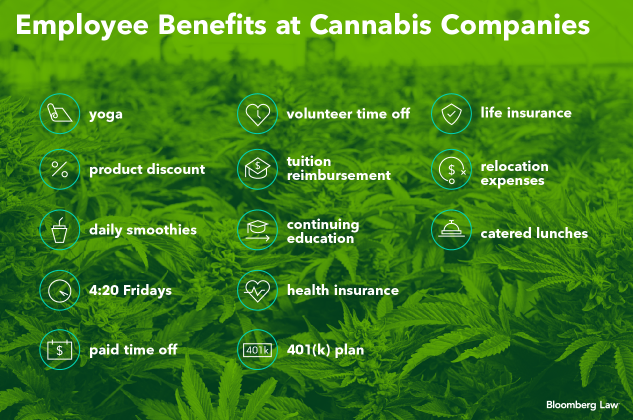 Consultants and employers agreed that some years ago it was difficult to offer benefits to workers in the industry: Employers were trying to keep expenses in check and benefit providers didn’t want to be associated with cannabis companies.

In the early days—back in 2013 when the first licenses to sell marijuana were being issued in Washington state—companies in the industry struggled to find benefits providers, Kara Bradford, co-founder and chief talent officer of Viridian Staffing, told Bloomberg Law. Three or four years later, the industry was full of startups with few employees, insufficient funds to cover benefits, and even fewer providers who could address their needs, she said.

Many insurance providers still don’t want to do business with cannabis companies, Kent Gruetzmacher, director of business development at Mac & Fulton Talent Partners, told Bloomberg Law. The industry is new and changing, and insurers may fear being associated with a company whose product is illegal federally, Gruetzmacher said.

Cure Holdings LLC, which operates dispensaries in Colorado, Hawaii, and Pennsylvania, had a hard time getting health insurance for its employees. Ryan H. Smith, Cure chief operating officer, told Bloomberg Law the company went to 11 companies in all, looking for a standard medical package; eight didn’t want to do business, but three submitted proposals.

A number of benefits providers don’t recognize cannabis companies as a legal industry, Los Sueños Farms’ Mason told Bloomberg Law. They’re worried that the government might step in and close them if they do business with cannabis companies, he said.

Companies had to get creative to be able to make up for the benefits they couldn’t afford or find in the marketplace, Viridian’s Bradford said.

To offset the lack of traditional benefits, companies offer unconventional perks like yoga classes and reward workers with free or discounted products, Bradford said. On the retail side, companies give samples to budtenders—the name given to retail staff—so they can share their firsthand experience with customers or patients.

Depending on the state where they operate, some companies face potential complications if they pay employees bonuses, Bradford said. States have different rules about whether bonuses count as part of a worker’s compensation when calculating overtime pay, for example. “We have seen some attempt to offset this by increasing other benefits like paid time off,” she added.

The company offers continuing education, employee discounts, a 401(k) plan, paid time off, and parental leave, Cullen said. “As time passed, we have been open to the idea that we need to make changes to accommodate the life of the people that work here,” Cullen said. “That’s how we retained people around here—we give them benefits to allow them to stick around.”

As to nontraditional benefits, employees are encouraged to use volunteer paid time off and certain employees enjoy paid time off after one year with the company, Vander Veer told Bloomberg Law. Employees get a 40 percent discount on all products, receive free branded gear several times a year, and get samples of new products when vendors offer them, Vander Veer said.

Medicine Man Denver has monthly parties to celebrate birthdays and anniversaries as well as a holiday party every year, she said. For the moment, Medicine Man doesn’t offer a retirement package, but it could do so within the next two years, Vander Veer said.