Stacks of U.S. $100 bills are arranged for a photograph in New York City on Feb. 7, 2013.
Photographer: Scott Eells/Bloomberg via Getty Images

Financial companies may finally be getting a break from defending their 401(k) plans in court.

Deutsche Bank, American Century, and T. Rowe Price are among banks and money managers that have been sued by angry employees who say the companies are profiting off their retirement savings. The lawsuits take aim at 401(k) plans filled with affiliated investment products, which workers say carry high fees that benefit their employers while performing worse than less expensive alternatives.

But as the court rulings—and multi-million dollar settlements—have trickled in, the rate of newly filed lawsuits has slowed to nearly a standstill. After more than $115 million in settlements and a handful of unsuccessful lawsuits, a dwindling list of potential defendants may have put the brakes on this line of cases.

“In terms of targets for this type of litigation, a lot of them have already been hit,” Heather M. Mehta, an associate with Greensfelder Hemker & Gale PC, told Bloomberg Law.

Between 2015 and 2018, at least 34 companies were hit with proposed class actions challenging the affiliated funds in their retirement plans. At least seven new companies were targeted in each of those years.

Only one company—global management consulting firm McKinsey & Co., which has an in-house investment manager—has been hit with similar allegations in 2019, according to a Bloomberg Law docket analysis. 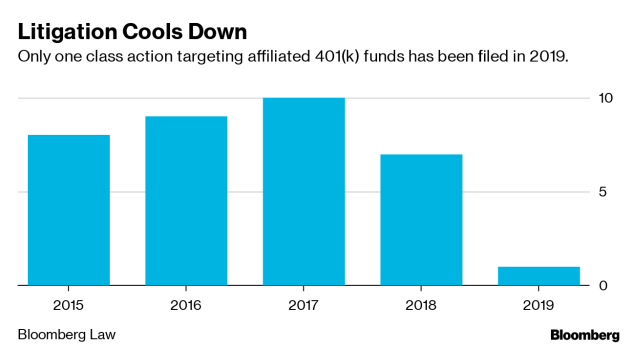 The slowdown in newly filed cases comes even as companies continue to sign seven- and eight-figure settlements.

More than a dozen of the companies sued since 2015 have negotiated multi-million dollar deals, with the total dollar value of all settlements exceeding $115 million.

‘All the Best Defendants’

One explanation for the slowdown in new cases may be that there aren’t any more companies to sue.

“In something like this, where a plaintiffs’ attorney develops a really interesting theory of ERISA liability, after a while all the best defendants are taken,” Mehta said.

Litigation over affiliated funds has been around for more than a decade. But it picked up steam in 2015, when Deutsche Bank, BB&T, and Allianz Asset Management were among the companies sued. An earlier wave of cases targeted large companies over their 401(k) fees more generally, without a strong focus on alleged self-dealing.

Gregory Y. Porter, an ERISA litigator and partner with Bailey & Glasser LLP in Washington, agreed that the list of new potential defendants has dwindled.

“There are only so many financial services companies that are in the business of offering and managing pooled investment funds,” Porter said in an email. “And even fewer have plans large enough (more than $500 million in assets) to generate enough damages to make a lawsuit viable.”

“Most all of those entities have been sued,” he said. 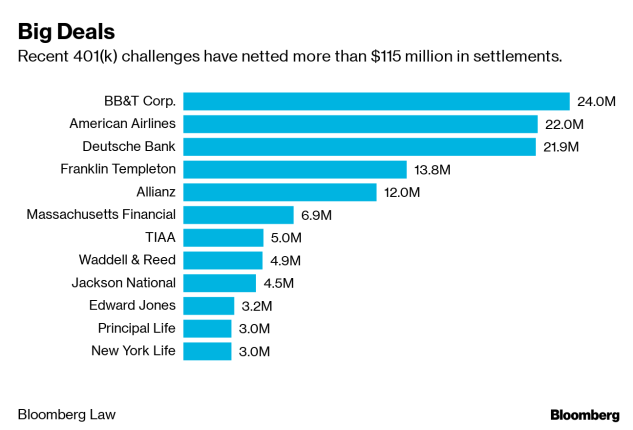 Another potential reason for the slowdown? Not all the cases have gone plaintiffs’ way.

More than a dozen cases survived past the motion-to-dismiss stage. But two were tossed outright, and two that went to trial resulted in full victories for American Century and Putnam Investments, though the Putnam case was partly revived on appeal.

Even some of those multi-million dollar settlements might not have given much incentive to plaintiffs’ lawyers to file similar cases.

Mehta, who focuses on employee benefits litigation and compliance in her firm’s St. Louis office, pointed to a $6.9 million settlement announced by Citigroup Inc. in 2018. The deal was struck more than a decade after the case was filed, and it provided about $2.3 million in attorneys’ fees for the plaintiffs’ lawyers—not a great payout for a legal team devoting more than 10 years to a case, she said.

A final reason for the slowdown may be a simple one: ERISA litigation tends to come in waves, and we’re nearing the end of this particular wave, Mehta said.

She likened the process to a bell curve, and said that recent litigation trends targeting companies that switch from traditional pensions to cash-balance plans and accusing hospitals of using ERISA’s “church plan” exemption to excuse large funding deficits have followed a similar pattern.

When someone gets the next interesting idea for a theory of ERISA liability, they’ll file a handful of cases to test the waters, Mehta said. Other plaintiffs’ firms will wait to see how these cases fare before filing their own similar suits.

“With any type of new legal theory litigation, there will be a life cycle where it’s a little slow at first, it really picks up, and then slows back down,” she said.

But don’t discount the possibility of a new wave of affiliated fund cases.

“Maybe in a few years from now there will be another wave after covenants expire and companies forget why they got sued and go back to their old ways,” Porter said.