More lawsuits are being filed against company 401(k) plans over the fees associated with saving for retirement.
Photographer: Ron Antonelli/Bloomberg

Historians studying 2020 will focus on pandemics and presidential politics, but benefits lawyers may remember it as the year litigation over 401(k) fees turned from a steady stream to a flood.

Proposed class actions challenging 401(k) plan fees are on track for a fivefold increase between 2019 to 2020, according to a Bloomberg Law analysis. More than 60 cases were filed in the first eight months of 2020, compared to about 20 in all of 2019.

“It’s incredible to me how many cases have been filed in 2020,” Stacey C.S. Cerrone, a benefits attorney and principal at Jackson Lewis PC in New Orleans, said.

Several employers have even been sued multiple times by participants who say the plans are too expensive. Cerner Corp., Omnicom Group Inc., and Quest Diagnostics Inc. are among the companies that have been sued twice this year.

The spike in cases can be explained by the maturing body of law under the Employee Retirement Income Security Act, an emerging blueprint for filing and litigating cases, new tools available to plaintiffs’ attorneys, and—yes—even the global pandemic, attorneys told Bloomberg Law. 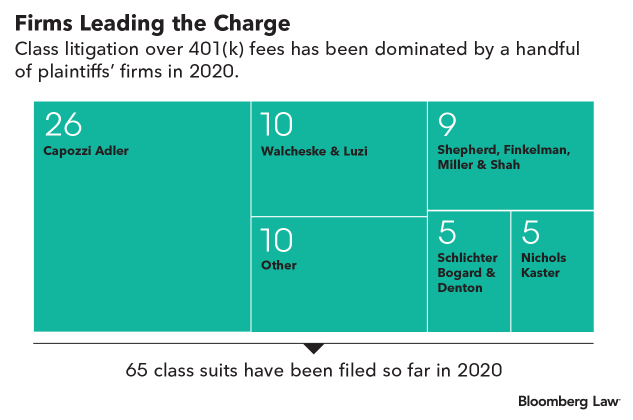 Covid-19 has altered how we live, work, and socialize. It also may be partly responsible for the spike in fee litigation.

James E. Miller, a plaintiff-side litigator and a partner with Shepherd, Finkelman, Miller, & Shah LLP in Chester, Conn., said his firm has had five to 10 times as many inquiries from retirement plan participants and plan sponsors concerned about fees.

“With the pandemic, participants and retirees are at home and frankly are having more time to focus upon their retirement savings and be concerned about their retirement savings,” Miller, whose firm has active cases against ADP Inc., MedStar Health Inc., and others, said. “They’re making inquiries about whether their investments and the expenses in their plans are appropriate.”

Data support this theory. In the first three months of 2020—before pandemic restrictions dramatically affected daily life—only about four 401(k) fee suits were filed per month. That number increased significantly by summer: More than a dozen suits were filed in each of June, July, and August.

The pandemic may have made it easier in some ways for plaintiff-side attorneys to research their cases, Miller said.

“People are more willing to talk,” Miller said. “They’re lonely, they’re interested in providing information in a way they wouldn’t typically be if they had better things to do.”

Chipping Away at Information Asymmetry

Lawyers have been fighting over 401(k) fees for more than a decade, with an asymmetry of information that plaintiffs’ attorneys say works against them. Plan details are typically held by defendants, with limited opportunities for others to get a peek before discovery.

In recent years, plaintiffs’ attorneys have developed better tools to chip away at that asymmetry and file more thorough and potentially successful complaints, said Paul M. Secunda, a plaintiff-side ERISA litigator and partner with Wisconsin’s Walcheske & Luzi LLC, who has active cases against Costco Wholesale Corp., Oshkosh Corp., and others.

“The plaintiffs’ bar has become more sophisticated with their own statistics and their own information,” Secunda said.

Traditionally it’s been difficult to find the underlying information showing a retirement plan’s true fee levels, Secunda said. But new databases and consultants with industry experience have bridged some of this gap, he said.

Shepherd Finkelman’s Miller echoed this sentiment. Though an information asymmetry still exists, Miller said improvements in the data and analysis available to plaintiffs’ attorneys has allowed his firm to bring cases it might not have brought in the past.

“There were probably times in the past when we declined to pursue a case because we just didn’t have enough information to know whether there was a case there,” Miller said. “As a result of improvements in the accuracy and availability of information, we’re not nearly as handicapped.”

Attorneys interviewed by Bloomberg Law agreed there’s no one court ruling paving the way for a flood of 401(k) fee lawsuits. Recent decisions against the University of Pennsylvania and Intel Corp. are seen by some as boosting plaintiffs’ chances. But defense counsel has a number of rulings to rely on, too, Jackson Lewis’ Cerrone said.

“I think probably for every decision that a plaintiff’s counsel is going to point to that supports them, we have a decision on the defense side that supports our position,” Cerrone said. “The case law is maturing.”

“Many of the complaints contain pages and pages of generic allegations about the 401(k) industry, fee structures, and available products—allegations that often have little bearing on the subject plan,” she said. “These generic allegations will get copied over to other complaints about other plans, although they do not shed any light on the particulars of that plan either.”

“It is not unusual now to see more than one complaint filed targeting the same plan, which can bring fights over venue, or over which firm will serve as lead counsel,” she added.

“One of the big differences in these lawsuits, even compared to three, five, or 10 years ago, is that they’re highly specific,” Secunda said. “The counts, the claims that are brought are different from lawsuit to lawsuit, because what Company A did isn’t what Company B did.”

Defense attorneys should understand that they’re litigating against seasoned experts, he said.

“We’re all highly sophisticated, we all know ERISA really well, and we’re not dipping our toes into these waters,” he said. “We’re experts in ERISA and we’re basing our complaints on overwhelming evidence.”