“Panic,” is how Joe Sky-Tucker described the sentiment among his low-income clients in late March.

His Seattle-based organization, Business Impact NW, was in a scramble to help clients who often can’t get loans at traditional financial institutions. Unequal access to federal help meant money was getting tighter for the $12 million institution, as it faced mounting funding requests from panicked customers.

Congress provided a lifeline for small businesses in late March: the Paycheck Protection Program, a $349 billion program to facilitate government-backed, forgivable loans intended to keep businesses afloat. Demand was high when the program launched in early April: the allocated funding ran out in less than two weeks and many Community Development Funding Institutions (CDFIs) like Sky-Tucker’s felt left out.

The more than 1,000 CDFIs across the country provide education, investments, and loans to low-to-moderate income individuals and businesses that usually can’t access credit at larger banks, and who are most at risk during an economic downturn.

With Congress set to start negotiating another relief package in later in July, CDFIs are looking to the future and seeking new funding mechanisms to support their clients.

In the early days of the program, hundreds of CDFIs were certified to offer PPP loans, a Treasury spokesperson told Bloomberg Tax, because they were already Small Business Administration-approved lenders or because they are federally insured financial institutions or credit unions.

But for many CDFIs, getting an application in was near-impossible. Sky-Tucker said his organization managed to get eight applications into the SBA’s system for approval in the first round of funding, and only after investing in software that processes and submits applications more efficiently.

Tommy Espinoza, CEO of Raza Development Fund, a Phoenix-based CDFI, said the vast majority of his clients are used to dealing in cash and physical paperwork—contrary to the program’s required digital submissions. That barrier alone delayed his organization’s ability to steer funds to the Latino-owned mom-and-pop shops that it supports.

“I would venture to say that the majority of that population, or those businesses, got left out of this,” Espinoza said. “The shame is that some of them may not come back.”

The Treasury spokesperson said the government tried on a best-effort basis to include CDFIs from the beginning of the loan program.

“Since the launch of PPP, Treasury and SBA have worked tirelessly to encourage and facilitate participation by CDFIs so that traditionally underserved communities have the resources they need,” the spokesperson said in a statement to Bloomberg Tax. “We have prioritized and contacted hundreds of CDFIs numerous times since the beginning of the program with a clear message: CDFIs are wanted as PPP lenders, and it is easy for them to sign up.”

The initial round of loans came under fire after the money ran out quickly and it was reported that recipients included big businesses like Shake Shack, Ruth’s Chris Steakhouse, and the Los Angeles Lakers.

“Banks who were already approved went to their clients,” Opportunity Finance Network President and CEO Lisa Mensah told Bloomberg Tax. “And we knew all along that their clients weren’t at the base of the economy.”

The Treasury Department made some changes to the program rules when the PPP relaunched in late April with an additional $320 billion.

Treasury also did more to certify CDFIs, Mensah said, something that took a chorus of support from CEOs of some of the largest U.S. banks, constant badgering from CDFI groups, and a push by members of Congress.

The Trump administration took another step in May to ensure that low-income communities would have access to PPP funds. The government earmarked $10 billion specifically for CDFIs and later set aside an additional $30 billion for smaller institutions, CDFIs included.

“I think mistakes were made,” Mensah said. “But the quick response and the bipartisan and surprising nature of the full-throated set of advocates was hugely valuable to our industry and our future.”

Through June 27, the SBA had disbursed more than $7.3 billion in loans through 303 CDFIs, according SBA data. That number could grow if President Donald Trump signs a bill that cleared Congress to extend the application period, which expired June 30, into August. 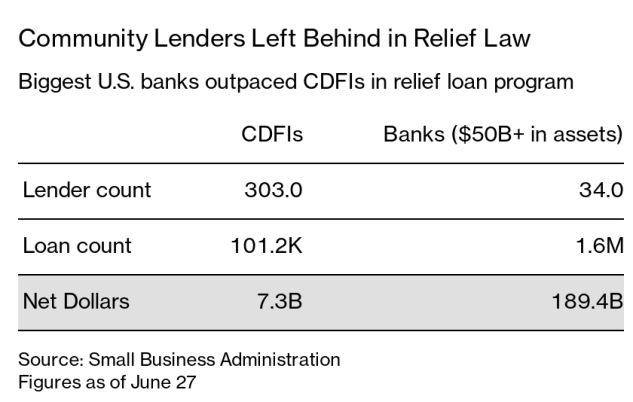 Not a Universal Fit

Even with the increased Treasury outreach, some CDFIs still opted out of participation.

Inna Kinney, founder and CEO of Columbus, Ohio-based Economic and Community Development Institute, said her organization declined to participate because the requirements for CDFIs prevented her organization from using the money. The organization has made almost $6 million in new loans since April.

Kinney cited a provision that required CDFIs to have originated, maintained, and serviced more than $50 million in business loans or other commercial financial receivables during a consecutive 12 month period in the past 36 months. Her organization, one of the largest in Ohio, holds $27 million in total assets.

The SBA relaxed that requirement in early May, but Kinney expressed what many felt: The PPP wasn’t designed for organizations like hers.

“It’s great for Congress to have all of these programs put in place, but they have to also think about how organizations are going to be able to do this because we don’t have money sitting around like banks do,” Kinney said.

A direct funding vehicle for CDFIs in the next coronavirus relief measure would go a long way for funds being depleted, Kinney said.

Until then, CDFIs will continue to leverage their existing bank partners, local, and state governments for more aid.

“We’re going to strive to be there for our community,” Raza Development Fund’s Espinoza said. “We heard through all of this craziness: La esperanza que los dieron—everybody, you gave me hope, somebody cared.”