The bill, proposed Friday, both aligns with many of President Joe Biden’s infrastructure goals and follows in his footsteps by calling for substantial infrastructure spending increases.

DeFazio’s committee will consider the bill June 9. It has no Republican cosponsors. 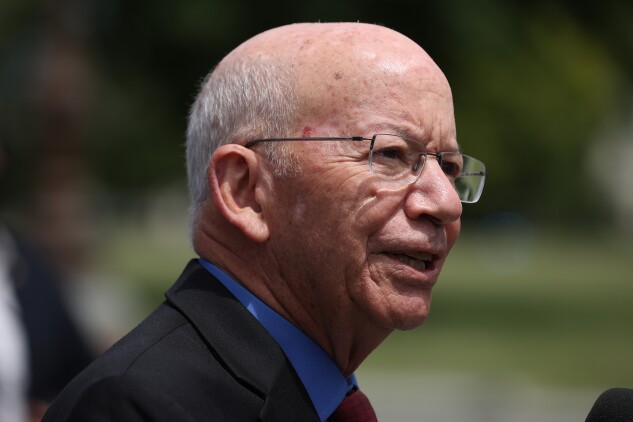 House Transportation and Infrastructure Chairman Peter DeFazio speaks about the need for new infrastructure legislation with fellow members of Congress and big city mayors outside the Capitol on May 12, 2021.
Photo: Chip Somodevilla/Getty Images

The Democrats’ legislation would authorize about 80% more funding than the last long-term surface transportation law enacted in 2015 ().

It also proposes substantially more money than the roughly $500 billion in House Democrats’ from last year. Republicans largely opposed that measure and the Senate never considered it. Whether this year’s measure will win support from GOP lawmakers who have called for a more tailored package remains to be seen.

Left unresolved so far: how to pay for surface transportation programs. The gasoline tax, the main source of federal revenue for highways and transit, is inadequate for current spending levels. The panels charged with resolving financing questions — the House Ways and Means and Senate Finance committees — have yet to weigh in.

What’s in the Bill

A majority of the funding in the House Transportation panel’s bill — $343 billion — would be allocated to roads, bridges, and safety, with a focus on fixing existing infrastructure. That amount would include $32 billion for bridges and $4 billion for electric vehicle charging infrastructure. It would also end restrictions on EV charging on interstate highways.

The legislation would authorize $3 billion for a program that seeks to reconnect communities divided by highways. Biden’s infrastructure package proposed giving $20 billion to a similar program. About $8.3 billion would also go toward reducing carbon pollution in the House bill.

“This bill takes on entirely new issues never before considered, such as climate change and multi-modal access in and through cities and towns,” Del. (D-D.C.), the chair of the Transportation and Infrastructure Subcommittee on Highways and Transit, said in a news release.

The lawmakers are also seeking to increase funding significantly for rail and transit. The bill would authorize $109 billion for transit, scaling up investment in zero-emission transit vehicles and creating programs to address challenges such as compliance with the Americans With Disabilities Act.

The measure would substantially increase passenger and freight rail funding, authorizing a total of $95 billion. It would triple money to Amtrak, authorizing $32 billion for the passenger rail service.

The funding would upgrade intercity passenger rail and support major projects such as the Gateway Program between New York and New Jersey, according to Rep. (D-N.J.), chair of the Subcommittee on Railroads, Pipelines and Hazardous Materials. The spending will push more people to “use rail transportation, reduce traffic congestion, lower carbon emissions, and reduce the effects of climate change,” he said in a statement.

The committee’s bill faced delays from the return of earmarks, or dedicated funding for specific projects, this Congress. About three-quarters of House members submitted more than 2,300 project requests for a total of almost $14.9 billion for pet projects in the surface transportation bill. Legislative text that includes so-called member designated projects will be made public before the committee considers it, according to the panel.

The Environment and Public Works Committee advanced a bipartisan $303.5 billion measure to reauthorize surface transportation programs for the next five years in a unanimous vote on May 26. That panel is one of four that will weigh in on the legislation in the Senate.