A job fair offer information on cosmetology, which is among the careers that require licensing.
Joe Raedle/Getty Images

Occupational licenses allow states to safeguard the public and increase revenue by making people take a test and pay a fee before entering their desired line of work.

There’s a drawback, however. Licensing rules that are overly burdensome “can block people who would be great in that occupation” but can’t surmount the educational and licensing barriers, Ryan Nunn, a Brookings Institution economist, told Bloomberg Law.

“Twenty-one percent of workers 25 to 64 hold a license for their current job,” Nunn said, citing Labor Department data. Licensing is “much more common” in health care, the legal profession, and education, he said.

Licenses Can Be Pricey

Licenses “often come with steep costs,” Dick Carpenter, director of strategic research at the Institute for Justice, told Bloomberg Law. There’s “a general awareness” that occupational licensing should be reconsidered, he said. The institute describes itself as a libertarian public interest law firm.

A 2017 study by the institute measured the impact of licensing on 102 lower-income occupations. On average, licensing laws require nearly a year of education and experience, a test, and more than $260 in fees, the institute concluded. 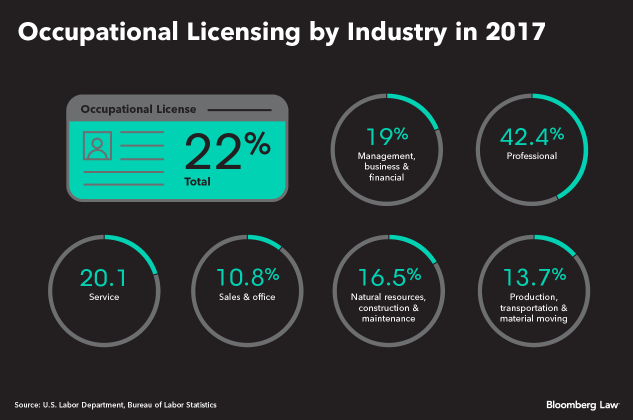 Some licenses are even more expensive. A cosmetology license generally runs $15,000 in tuition and $1,700 for books and materials, plus the actual licensing fee, Carpenter said.

Some critics of occupational licensing question the motives behind many licensing requirements. “It is overwhelmingly the members of the industry asking for licenses,” rather than consumers worried about harm from unlicensed practitioners’ shoddy work, Carpenter said.

Licensing boards have a market incentive “to set the hurdle as high as possible” for entering the occupation “to keep competitors out,” Carpenter said. Such obstacles are especially likely to hinder the entry of poor and minority workers, he said.

“The task for policymakers is to find the least intrusive occupational regulation that will still ensure public health and safety,” Nunn said.

Instead of forcing workers to attain an occupational license, a state could impose less onerous alternatives, Nunn said. It could require a worker to seek a professional certification, to register with the state, to undergo state inspections, or to carry insurance.

During the past few years, momentum has grown for scaling back such licensing or making it more worker-friendly. On the federal front, the Labor Department recently supplied $7.5 million so the Council of State Governments and the National Conference of State Legislatures could work with states on this issue.

Federal legislation enacted in July—the Strengthening Career and Technical Education for the 21st Century Act—provides an additional $2 million in funding next year. The extra money will enable CSG and NCSL to increase the number of states they’re advising from 11 to 16, a DOL spokesperson told Bloomberg Law.

In particular, states are being urged to explore reciprocity, which enables people licensed in one state to have their credentials accepted by another jurisdiction. That approach provides a means of ensuring that workers can move freely without having to get a new license.

People shouldn’t forgo good-paying jobs in other locations “merely because they face the obstacle of needing to be credentialed in their specific field a second time,” Rep. Glenn Thompson (R-Pa.), told Bloomberg Law in an email. Thompson was a sponsor of the federal law.

The Nurse Licensure Compact, through which about 20 states agreed to recognize nursing licenses from other participating states, is one example of state collaboration.

Several states are taking steps on their own to make it easier to launch a career. Earlier this year, Nebraska mandated periodic review of licensing requirements and use of the least restrictive option. In 2017, Arizona started requiring state boards to waive licensing fees—which ranged from $60 to $580—for low-income, first-time applicants.