Shareholders interested in corporate diversity and inclusion practices and workplace culture are turning more toward litigation as a tool to hold companies accountable.

Lawsuits from shareholders claiming their investments are threatened by bad work culture present a new realm of liability for companies that previously could’ve handled those allegations through arbitration and non-disclosure agreements. Unlike many employees, shareholders typically aren’t bound by these types of agreements.

A shareholder suit against earlier this month is the latest example of this emerging tactic. The suit accuses the electric-vehicle maker’s officers and directors of allowing a “toxic workplace culture” to fester at the company, exposing Tesla to potential liability.

The case stems from allegations of racial discrimination and harassment at Tesla’s factory near San Francisco, the subject of separate litigation from California’s Department of Fair Employment and Housing.

Mike Delikat, an employer-side attorney at Orrick Herrington & Sutcliffe LLP, said the bump in this type of shareholder lawsuit has pushed his practice more toward securities litigation.

Delikat is among a group of employment attorneys whose work now focuses on reducing corporate liability for shareholder actions.

“These things have now become much more than just individual employment claims, they’ve become securities litigation against the board of directors because that gets a lot more attention and reaction,” he said.

Both executives and investors watch these cases closely and do what they can to avoid being next, said John Streur, chief executive officer of Calvert Research and Management. 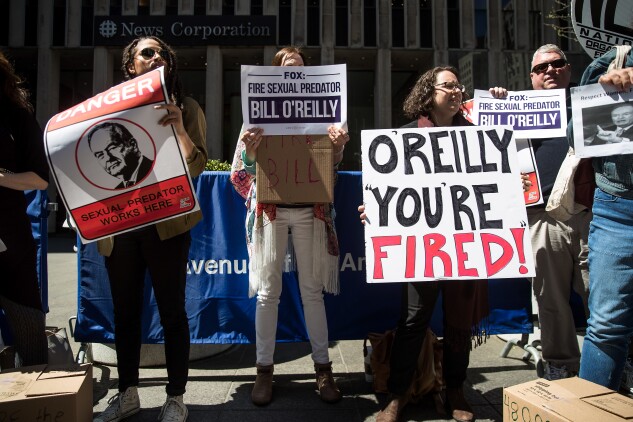 Demonstrators rally against Fox News television personality Bill O’Reilly, who was the subject of numerous sexual harassment allegations and legal settlements, outside of the News Corp. and Fox News headquarters in Midtown Manhattan, April 18, 2017 in New York City.
Photo by Drew Angerer/Getty Images

The case against Tesla borrows from a playbook dating back five or six years, when shareholders began suing companies for employment-related claims that used to be handled individually by the employees themselves.

“What happened was in the past these were either individual employment law discrimination or harassment cases, or sometimes class actions,” Delikat said. “And then smart plaintiff-side securities litigators figured out a lot of these claims involve the C-suite or high-level prominent executives.”

One of the first high-profile examples was a shareholder suit against related to sexual harassment claims against prominent Fox News personalities, including Bill O’Reilly, that the company settled. The shareholders alleged that the company’s executives didn’t do enough to prevent the harassment and avoid costly settlements with the alleged victims.

That shareholder suit settled in 2017

Google Inc. parent company settled a similar suit related to sexual misconduct in 2020 for a $310 million commitment to diversity and equity initiatives.

which once owned Victoria’s Secret, last year agreed to spend $90 million to change its corporate practices as part of a settlement of shareholder lawsuits alleging a toxic culture of sexual harassment and misogyny. Victoria’s Secret spun off from L Brands last August, and the parent company has since changed its name to Bath & Body Works.

also faced a lawsuit alleging company leadership failed to curtail a culture of racial and sexual harassment, leading to by the US Equal Employment Opportunity Commission and California’s DFEH. A California federal judge dismissed the suit last month, ruling that the shareholder who brought it didn’t exhaust other remedies.

In the past, some companies have released pay equity studies in an attempt to quell shareholder demands in this area. Making this information public pushes companies to improve diverse hiring and retention, which can help avoid costly employment discrimination lawsuits or public relations scandals.

told its shareholders in April 2016 that it would work on closing its gender pay gap, which was $0.02 on the dollar at the time.By 2017, the company reported achieving equal pay for men and women.

Publicly traded companies are facing increased human capital disclosure requirements from the US Securities and Exchange Commission. The agency signaled in its spring regulatory agenda that it will update existing requirements by October to mandate more specific and quantitative information about a company’s workforce, like pay equity statistics.

Sarah Maynard, head of diversity and inclusion at the CFA Institute, said shareholders are increasingly demanding that kind of workforce policy information from companies.

“A lot of it depends upon how advanced they are themselves as individuals and as shareholders and as investors,” she said. “But essentially, they are certainly looking for risk mitigation at the most basic level but they are also looking at, for example, retaining employees and staff.”

Investment management company Calvert, for its part, started an initiative to get companies disclose their EEO-1 forms, an annual workforce demographic reporting standard for companies with more than 100 employees. That’s just the tip of the iceberg, Streur said.

“But we still need many more companies to give out that information, and we also need a lot more detail on how companies are treating people,” Streur said.

To contact the reporter on this story: in Washington at jmorenodelangel@bloombergindustry.com