Executive coach Carol Kivler knows about the working person’s struggle with depression. In a June presentation at the Society for Human Resource Management’s annual conference in Chicago, she recounted how she was hospitalized in a locked ward after contemplating deliberately crashing her car with herself and her family trapped inside. After 10 years of sickness, she said, she has been in recovery for 18 years.

Back when depression overwhelmed her, Kivler worked for Mercer County Community College in New Jersey. But in her consulting career, too, she sees firsthand the damage done by depression in the workforce. She told Bloomberg Law that of the 83 executives in her program now, she has recommended counseling for eight.

Kivler’s tiny sample tracks surprisingly closely with national figures on the impact of depression on the working-age population. The annual National Survey on Drug Abuse and Health from the Substance Abuse and Mental Health Services Administration offers a good yardstick on the numbers of people affected by depression. This measures specifically “major depressive episodes” rather than the broader category of depression, finding that in 2016 “around 9 million people who were employed full-time or part-time had a major depressive episode,” Dr. Michael Schoenbaum, senior adviser for mental health services, epidemiology, and economics at the National Institute of Mental Health, told Bloomberg Law July 11.

That’s equivalent to “around 6 to 7 percent of working people—5.5 percent of full-time, 9 percent of part-time workers,” he said. 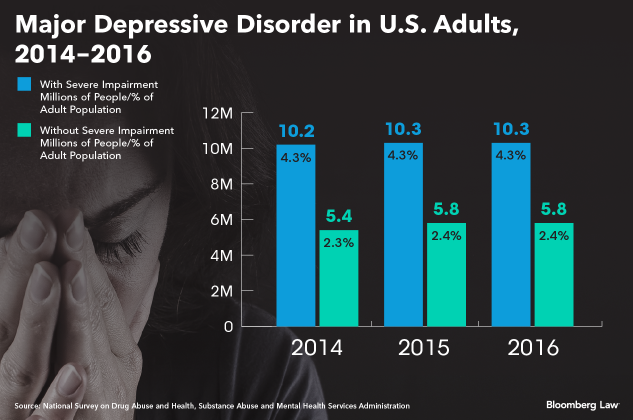 The SAMHSA figures show the rate of depression in the working-age population to be basically stable in recent years. But Ken Duckworth, medical director at the National Alliance on Mental Illness, told Bloomberg Law July 12 that suicides in the U.S. have been on the rise.

And Terri L. Rhodes, CEO of the Disability Management Employer Coalition, told Bloomberg Law in a July 13 email that in general, “mental health disorders which cause absence have increased over the years. Typically, these diagnoses are in the top three reasons for absence/disability behind pregnancy, which leads as number one.”

Hundreds of Billions in Losses

A 2008 paper in the American Journal of Psychiatry came up with an estimate in lost earnings to episodes of depression alone of $193 billion. But that was in 2002 dollars, said Schoenbaum, who was one of the paper’s co-authors. In 2018 dollars, that would be $270 billion. “About three-fourths of that came via lower earnings among people who worked; one-fourth came via people not working at all,” he said.

A University of Michigan study came up with a similar figure of $210 billion in workplace costs, Duckworth said. Of that, 45 percent is direct costs, 5 percent is costs attributable to suicide, and 50 percent in “work costs, ‘presenteeism,’ and absenteeism"—that is, people with depression either call in sick or show up for work but don’t get much done.

The $193 billion figure “doesn’t even include people who are not being productive,” and those who have depression are subject to other serious illnesses, for example, because they don’t eat right or exercise, Susan Fahey Desmond, a management attorney and a principal in Jackson Lewis P.C.’s New Orleans office, told Bloomberg Law. “That drives up the cost of health care,” she said.

“It’s very significant, and we’re not talking about it enough,” Kivler said.

To contact the reporter on this story: in Washington at mbermangorvine@bloomberglaw.com