Working parents who’ve been without childcare for months face dwindling options for financial help as employers begin to call them back to work and the U.S. heads toward an uncertain autumn.

The patchwork of federal, state, and local leave laws leaves millions of working parents without legal guarantees for paid time-off to care for children, attorneys and worker advocates said. And some have lost unemployment insurance benefits for rejecting an employer’s recall notice due to child-care responsibilities, they said.

The Catch-22 faced by parents asked to return to work amid closed summer camps and daycare centers—with the prospect of shuttered schools in the fall—highlights the gaps in the nation’s child-care system and the costs of those shortcomings.

“It’s a complete and total mess,” said Joan Williams, a law professor and director of the Center for WorkLife Law at UC Hastings. “Our child-care system was a Rube Goldberg machine before Covid. Now it’s completely broken.”

The child-care supply has grown scarcer as providers have gone out of business over the course of the pandemic, according to a June report from the American Action Forum, a center-right think tank. Small, home-based care centers are one type of provider that have started to reopen or haven’t gone out of business, but they’re not widely available, the report said.

Parents who quit working because of child-care responsibilities would qualify for some type of unemployment benefits, worker advocates said. But their ability to keep their families afloat on those benefits is set to take a significant hit at the end of July, when the extra $600 in weekly payments from Congress’ $2.2 trillion relief package are scheduled to expire. Benefit caps vary by state, with payments averaging about $330 per week nationwide.

Moreover, workers who leave to care for children have no guarantee that they’ll get their job back, given the deep economic damage caused by the pandemic, said Elise Gould, an economist at the left-leaning Economic Policy Institute.

Single parents who don’t have paid leave or unemployment benefits can find themselves with no good options.

“Many of those workers end up in really impossible situations,” said Molly Weston Williamson, director of the paid leave initiative at A Better Balance, an advocacy group focused on work-family issues.

Companies that have been generous about allowing workers to care for their children while teleworking may reexamine their policies. For example, Florida State University said last month that it plans to return to its standard policy in August, which forbids employees from caring for children while working remotely.

For companies that resumed operations after virus-driven shutdowns, about four in 10 didn’t have a dedicated plan for workers with child-care responsibilities, according to a May survey from the Society of Human Resource Management. Nearly 60% of survey respondents said child-care accommodations will be handled on a case-by-case basis, while just 7% said they’re considering or providing on-site child-care services.

Workers lack the legal right to force employers to accommodate their need to care for their children and their leverage to negotiate partly depends on how employers view their value, said Emily Martin, the National Women’s Law Center’s vice president for education and workplace justice.

Nevertheless, employers aren’t allowed to discriminate in how they grant workers accommodations, attorneys and others said. A working mother, for example, could sue under Title VII of the 1964 Civil Rights Act if her employer gave working fathers more flexibility to deal with child-care issues.

Taking leave to care for their children may be the best option for working parents called back to the office. But about a quarter of Americans who work in either the private sector or state or local government lack access to paid sick leave, the Pew Research Center said in a March report.

Seven states, including New Jersey, Michigan, and Arizona, have paid sick leave laws that permit workers to use accrued leave if their children’s school is closed for public health reasons, according to A Better Balance. New York City, Seattle, Pittsburgh, and a handful of other cities and counties have similar leave laws. Those laws generally guarantee workers the ability to accrue just two weeks of sick leave per year.

Congress created a paid leave program as part of its first coronavirus relief package. For those workers who qualify, the program provides two weeks of paid leave to care for children who aren’t at school, daycare, summer camp, or other “places of care.” It also gives up to 12 weeks of family and medical leave, 10 of which are paid at two-thirds salary with a $200 per day cap.

Yet the program, which expires at the end of 2020, doesn’t apply to huge swaths of the workforce.

The Families First Coronavirus Response Act leave program covers workers at firms with fewer than 500 employees. There are also exemptions for most healthcare workers and those at small businesses with fewer than 50 workers. That means that up to 80% of the workforce may not be eligible, according to the left-leaning think tank Center for American Progress’ April analysis, which was based on statistics from a pre-pandemic economy.

“They made these laws to try to help people, but they don’t help me,” said Tanesha Borgman, a speech pathologist in Colorado who works for an in-home healthcare company that has fewer than 50 employees. Borgman, who doesn’t get sick leave or vacation time, resumed making client visits two days per week in June. Her husband was left to care for her four-year-old son with special needs while working from home.

Starting this month, Borgman hired in-home child care to help out for a few hours during the days when she’s visiting clients, which she hopes will reduce the stress on her and her husband. But she still hasn’t heard whether her son’s pre-school will be open in the fall.

“If it’s closed, that could throw a wrench in things,” she said.

The pandemic pushed millions of people out of work in the spring. While the daily infections hit record levels at the start of July, raising the specter of another round of business shutdowns, it remains unclear whether Congress will replace the extra $600 booster to weekly unemployment payments once that program expires at the end of the month. 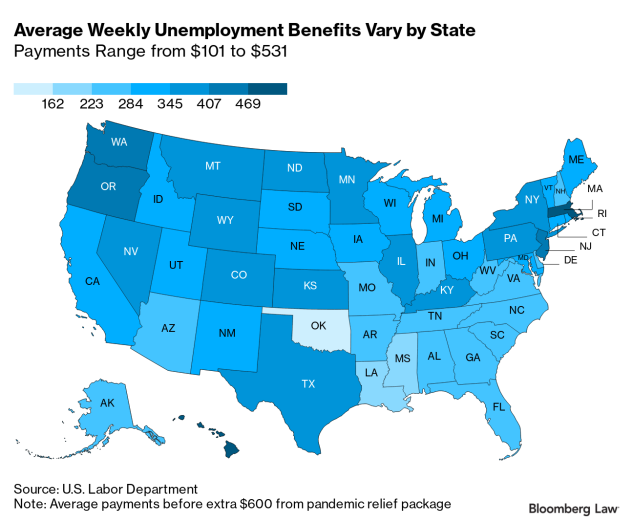 But parents without child care could lose unemployment benefits if they’re recalled to their jobs after pandemic-related layoffs. The legal question they must contend with is whether child-care responsibilities qualify as “good cause” to reject an offer of suitable work.

Each state administers its own unemployment insurance systems. In June, Labor Secretary Eugene Scalia told a Senate panel that it’s up to states to define what would disqualify a worker from unemployment pay if they refuse work.

For workers in Ohio, declining a job to care for a child is likely to cost a parent their unemployment insurance eligibility, said Patrick Higgins, a Legal Aid Society of Columbus staff attorney who helps unemployed workers.

At least two states—North Carolina and Michigan—have said that caring for a child who can’t go to school or another facility due the pandemic is good cause for refusing to return to work.

“There doesn’t seem to be a clear reason why one claimant received a positive determination and the other a negative,” Kohl said. “It may come down to the claims examiners individually and how well they were trained on this issue.”

Pennsylvania’s unemployment insurance agency has stopped paying benefits before it issues an appealable determination that a worker is ineligible, said Julia Simon-Mishel, who heads the unemployment compensation division of Philadelphia Legal Assistance. Those payment cessations are happening even though the U.S. Supreme Court barred that practice in a 1971 ruling, she said.

Some workers who’ve reported that they refused work get stuck in “investigation purgatory” in which they stopped receiving benefits, but haven’t heard from the state on their case status, Simon-Mishel said. That administrative limbo also delays a worker’s next step if he or she loses eligibility, which includes appealing the decision or applying for a special pandemic-related unemployment program.

Congress created a program for workers who don’t qualify for traditional unemployment insurance—including gig workers and others classified as independent contractors—in its second coronavirus relief package. That program may also cover those workers who lost eligibility for traditional unemployment insurance by refusing work to care for a child, advocates said.

The Pandemic Unemployment Assistance program pays those who can’t work because they need to care for children who are out of school due to the pandemic. The Labor Department has said that also extends to caring for kids who don’t have camp or other options during the summer.

The payments under the pandemic unemployment program, like traditional unemployment insurance, are poised to drop by $600 per week at the end of July. The program itself covers jobs lost through the end of the year.

— With assistance from Jaclyn Diaz