The Equal Employment Opportunity Commission seal hangs inside a hearing room at its headquarters in Washington.
Photographer: Andrew Harrer/Bloomberg via Getty Images

The federal agency that polices workplace discrimination and harassment is preparing for a drop in staffing levels that would continue a long-term downturn and is raising concerns among lawyers for businesses and workers.

The White House wants to trim approximately 14% of Equal Employment Opportunity Commission employees from the agency’s payroll next year. Although Congress is likely to reject the request, EEOC staffing levels are already down more than 13% in the last decade, and nearly 40% since 1980.

The agency has already acknowledged that its backlog of pending cases would likely grow if the cuts are approved. That would reverse the EEOC’s success in slashing the backlog during the Trump administration.

“Shortchanging the EEOC prevents the agency from serving out its mission to protect working people from the type of discrimination that can undermine a person’s economic security and derail careers,” Gaylynn Burroughs, senior policy counsel for advocacy group the Leadership Conference on Civil and Human Rights, said.

The White House requested $362 million to fund the EEOC next year, a $27 million reduction in the agency’s discretionary funding. Along with the overall lower funding ask, the EEOC projected a drop in full-time employee levels to 1,717, down from just over 2,000 people at the end of fiscal year 2019.

Congress has largely ignored similar proposals during the Trump administration and the agency’s total number of full-time employees could change depending on congressional approval. Still, the agency’s staffing levels have consistently trended downward since at least 1980, and the projected 2021 levels would be just more than half of what they were 40 years ago. 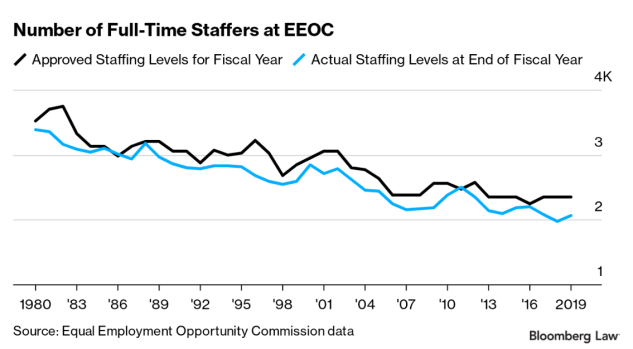 Agency officials, worker advocates, and the EEOC’s union expressed concern at the lower level staffing levels, which they say could slow down agency processes, like the investigation of discrimination charges filed by workers. Some attorneys, however, said staffing fewer employees could lessen litigation pressure on employers.

The budget request was released on the same day as the EEOC’s annual performance report, which touted the agency’s success at reducing the pending inventory of bias charges waiting to be processed. Republicans have called for reductions of the agency’s charge backlog, which declined to nearly 44,000 charges at the end of last year, and applauded the agency’s recent success at lowering it.

But the EEOC says it won’t be able to maintain that success if staffing levels are slashed. The agency projected in its budget justification that unresolved charges of discrimination will instead creep back up next year.

Rachel Shonfield, president of American Federation of Government Employees Council 216, which represents EEOC employees nationwide, has previously said that agency staff members are pressured to review charges without “substantive processing” and that having fewer employees will only make it worse.

“It’s pretty perilous to start by asking for a cut” in the budget, she said.

The EEOC declined to comment beyond the budget justification.

Democratic EEOC Commissioner recently pointed out the dwindling staffing levels to lawmakers, highlighting the 40-year low. The agency is expecting the number of investigators to decline on an average of 55 per year, according to the budget justification.

Democratic Sens. (Wash.) and (Mass.) have asked the EEOC for more information on staffing plans, according to a letter obtained by Bloomberg Law. The lawmakers said the EEOC trimmed its workforce by 7% last year, despite being directed by Congress to “increase front-line and investigative staff.”

“We are deeply worried these cuts in personnel threaten the agency’s ability to meet the demand for its services and to provide the crucial protections to which workers are entitled under federal law,” Murray and Warren said in a letter to EEOC Chairwoman Janet Dhillon (R).

“It’s simple—in order for the EEOC to protect workers from discrimination and harassment, the agency needs to be fully operational,” Murray, ranking member of the Health, Education, Labor, and Pensions Committee, told Bloomberg Law. “But because of Republican inaction—at the White House, in the Senate, and at the agency—the EEOC has been left with leadership and staffing vacancies, leaving it strained to help workers in need.”

A committee staffer for Sen. (R-Tenn.) pointed out the agency’s reduced backlog, saying that bringing those numbers down has been a priority for the HELP committee chairman, when asked about future staffing levels.

Business lawyers are also concerned about the potential impact on charge processing.

Fewer eyes on incoming charges will make “a difficult backlog” worse, and doesn’t benefit either workers or employers, Patrick Maher, Ogletree Deakins senior counsel in Dallas, said. It will likely take longer for charges to be processed, said Robin Shea, a partner with Constangy, Brooks, Smith & Prophete in North Carolina, and Ashley Cannady, a Balch & Bingham partner in Mississippi.

Former Democratic EEOC Chair Jenny Yang said the proposed drop raises serious concerns, particularly around scheduling time to meet with an investigator to discuss a discrimination charge. Staffing levels dropped by 14 percent in the two years that Yang ran the commission under the Obama administration.

“Although an online system exists for scheduling appointments with investigators, often these appointments are fully booked. Many individuals have to wait for extended periods of time or become discouraged by the inability to schedule an appointment and decline to file charges,” she said. “It is critical that the EEOC hire additional staff to meet the needs of workers across the country.”

Some workers wishing to file charges might even “give up through the gauntlet of this process,” Shonfield said.

Employers can expect the EEOC to be “less aggressive” in pursuing litigation in cases in which it finds cause, if the budget becomes final, Shea told Bloomberg Law. She and Cannady said the agency may instead try to resolve more cases out of court.

“The proposed budget cuts may align well with the objectives of Chair Janet Dhillon, who recently said that the agency’s priorities would include more compliance assistance (and, presumably, a less adversarial relationship with employers), and a continued emphasis on mediation and meaningful conciliation, among other things,” Shea said in an email.

Murray and Warren specifically requested information on the hiring of attorneys in the EEOC’s Office of General Counsel. The agency doesn’t break down the staffing levels of specific offices or departments in its publicly available data, but former commissioner Yang said openings have remained unfilled.

“The EEOC has been losing numerous attorneys in its Office of General Counsel, and the agency has not authorized new hires for these positions,” Yang said. “These attorney positions are essential to ensure the EEOC fulfills its mission and has the resources to enforce the law.”

Dhillon considered slashing the delegation of litigation authority to its Office of General Counsel in July 2019, but ultimately decided against it. This would have required EEOC commissioners to vote on whether to commence or intervene in even run-of-the-mill workplace bias lawsuits, something that’s currently delegated.

Worker advocates are concerned about the agency’s ability to enforce the law.

“The agency is already understaffed, so more cuts will only harm the EEOC’s role and diminish its ability to ensure that workplaces are free from harassment and discrimination—and that working people are treated fairly and with dignity,” Burroughs said. “Congress must reject any cuts to the EEOC and ensure that the agency has the funding necessary do the critical work it is charged with carrying out.”