A "store closed" sign is posted behind a locked gate at the California Surplus Mart, on July 16, 2020 in Los Angeles, Calif.
Photographer: Frederic J. Brown/AFP via Getty Images

Trump administration officials and Senate Republicans are discussing a short-term extension of unemployment insurance as lawmakers and the White House appear unlikely to reach a broader stimulus deal before the benefits lapse.

The possible side deal would extend supplemental federal payments that were provided to millions of Americans in the last coronavirus rescue package, according to people familiar with the matter. The scope of any extension is unclear.

Some Republican aides on Capitol Hill cast doubt on its chances of succeeding. Several Republicans didn’t support the original $600-a-week unemployment insurance provided under the Cares Act. And any extension would require votes from Democrats, who want the entire program renewed. The payments expire at the end of July.

Senator , an Ohio Republican, confirmed the discussions on a temporary measure, but said he preferred to revamp the expanded benefit as part of a larger stimulus package.

“Most of us agree that there needs to be something in its place, and most of us also agree that the $600 flat amount for every worker is not a good idea going forward because it’s a disincentive to get back to work,” Portman said in a Bloomberg Television interview on Wednesday. “The better solution would be to get our act together and get something by the end of next week.”

The temporary extension would be treated as separate from the $1 trillion cap Senate Republicans want to adhere to as their opening bid, according to two people familiar with the matter.

Not all Senate Republicans are aware of discussions of a side deal to avoid a lapse in unemployment insurance. Senator of Florida said he hadn’t heard of the idea but would consider it if there is no stimulus deal by the first week of August.

”I would prefer to reach agreement on a comprehensive response to the crisis, including an extension of unemployment assistance; state, local and tribal government assistance; and other priorities” included in a House-passed virus relief plan, he said Wednesday. 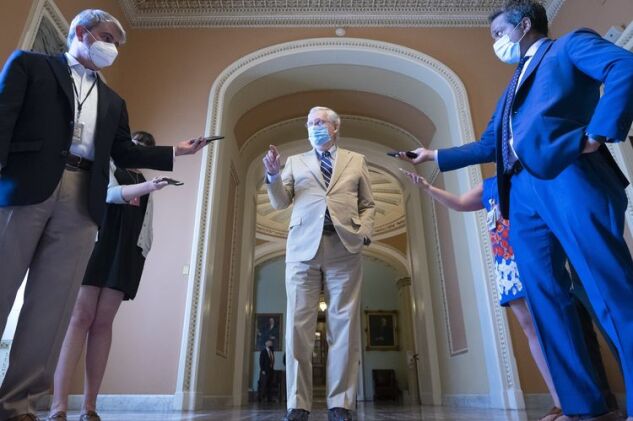 Senator of Oregon, the top Democrat on the Senate Finance Committee, said he wouldn’t support a short-term extension of the benefits and accused Republicans of trying to stall.

“We’re not going to go for some sort of let’s-duck-this-some-more strategy,” he said.

The White House declined to comment, and Senate Majority Leader ’s office didn’t respond to a request for comment.

The White House also appears to be backing away from earlier statements that failing to include a payroll tax holiday in the legislation might be a deal-breaker. Press Secretary said Tuesday the president still wants the measures.

“I don’t know that in any negotiation that there are red lines, but there are certainly high priorities and it will remain a very high priority for the president,” White House Chief of Staff said Tuesday on Capitol Hill.

Meadows and Treasury Secretary are returning to the Capitol Wednesday after an initial round of talks with Senate Republicans ended without a clear outline or any lessening of GOP resistance to President ’s desire for a payroll tax holiday.