The work-from-home phenomenon has triggered a fresh frustration for U.S. corporations: Americans are blowing the whistle on their employers like never before.

The proof is in the data, with the receiving 6,900 tips alleging white-collar malfeasance in the fiscal year that ended Sept. 30, a 31% jump from the previous 12-month record. Officials at the agency, which pays whistle-blowers for information that leads to successful investigations, say the surge really started gaining traction in March when Covid-19 forced millions to relocate to their sofas from office cubicles.

The isolation that comes with being separated from a communal workplace has made many employees question how dedicated they are to their employers, according to lawyers for whistle-blowers and academics. What’s more, people feel emboldened to speak out when managers and co-workers aren’t peering over their shoulders.

“You’re not being observed at the photocopy machine when you’re working from home,” said , a former SEC official who helped set up the agency’s whistle-blower program a decade ago. “It’s never been easier to record a meeting when you can do it from your dining room table,” added Thomas, who now represents tipsters as an attorney at Labaton Sucharow in Washington.

“When you feel disconnected from work, you feel more comfortable speaking up,” said Waytz, who has studied the motivations of whistle-blowers.

Intended or not, the SEC itself has played a big role in encouraging informants to come forward by showing how lucrative whistle-blowing can be. Since the pandemic hit the U.S., the agency has paid out some $330 million in awards, including to a single tipster in October. While the payments are tied to SEC investigations that almost certainly predate coronavirus, the amount of money going out the door is unprecedented in the decade since the regulator started its whistle-blower program. 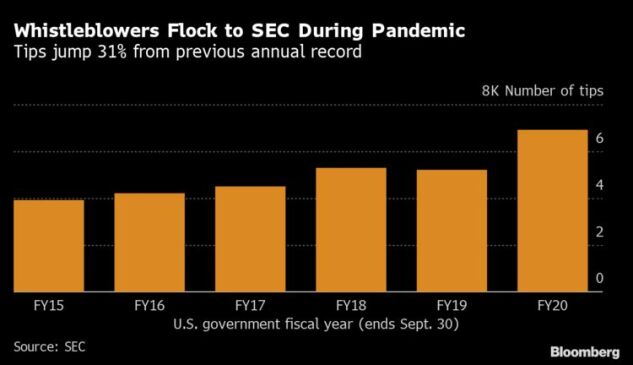 For corporations, the rise in tips risks triggering a consequence from work from home that will last long after employees return to the office. Even if few of the tips lead to SEC enforcement cases, companies could still be dealing with years of compliance distractions as the agency launches investigations, subpoenas documents and grills senior executives.

“Corporations and their lawyers are acutely aware of the fact that tips are flooding in and that whistle-blower awards have ballooned,” said , a former SEC commissioner who’s now a law professor at Stanford University. “You pay whistle-blowers more than $100 million, you’re going to get more whistle-blowers.”

The SEC gained authority to pay whistle-blowers as part of the 2010 Dodd-Frank Act after lawmakers assailed the agency for missing signs of corporate wrongdoing that were later found to have laid the groundwork for the 2008 financial crisis. Another massive black eye was the regulator’s failure to catch Ponzi scheme despite repeated warnings from whistle-blower .

Under the program, tipsters can receive financial awards if they voluntarily provide unique information that results in an enforcement action. Payouts can range from 10% to 30% of the money collected in cases where sanctions exceed $1 million. Awards are paid from a fund set up by Congress -- not money owed to harmed investors.

Leveraging whistle-blowers has become one of the SEC’s most potent tools for rooting out financial crime, despite the fact that most of the tips the SEC receives don’t lead to enforcement cases. Information has come from more than 100 countries, with whistle-blowers providing evidence such as texts, emails and recorded calls.

The SEC never discloses the names of whistle-blowers and what cases were brought with their help. Agency officials sometimes don’t even know the identity of tipsters. Thomas, the whistle-blower attorney, has gone so far as to use voice-changing technology to disguise clients’ genders on conference calls with the SEC.

About $737 million has been paid to 133 individuals since the SEC issued its first payment in 2012, with most tipsters waiting months or even years after the agency wraps up its investigations to get their awards. Part of the reason payouts have quickened recently is that the SEC has streamlined its process so that enforcement lawyers who work with tipsters can actively vouch for how crucial their help was.

Discussing the dramatic jumps in tips since the start of the pandemic, then SEC Enforcement Director said Dec. 3 that it’s too soon to assess the quality of the information the agency is receiving. She credited the huge awards that the SEC paid out last year as an important factor in encouraging whistle-blowing.

“Making more awards -- certainly larger awards -- all those things do go toward incentivizing whistle-blowers to come forward,” Avakian, who left the SEC last month, said at an event hosted by the American Conference Institute.

“The problem is that they’re being flooded with tips and don’t have a robust mechanism for separating the wheat from the chaff,” he said.

In recent months, the SEC has received reports on possible financial-disclosure violations and the mismarking of assets. The coronavirus’ impact on businesses has also triggered allegations of wrongdoing, as companies have a responsibility under SEC rules to be truthful about how the pandemic is affecting their bottom lines.

“It’s very convenient for management to blame Covid for underperformance,” said , author of “Financial Shenanigans: How to Detect Accounting Gimmicks & Fraud in Financial Reports.”“It becomes an alibi for a company’s problems.”

To contact the reporters on this story:
in New York at mrobinson55@bloomberg.net;
in Washington at bbain2@bloomberg.net