When a government initiative is called the “Paycheck Protection Program,” the assumption is it will keep workers on the job. But that hasn’t necessarily been the case.

Baked into the structure of the aid program, which uses taxpayer funds to back loans to businesses, are exemptions that employers can use to let workers go—even during the loan period—while still watching those “loans” become grants.

At the same time, lenders, not the government, are the first ones responsible for making sure businesses use the relief properly, and very little, if any, information on how businesses are using the money is publicly available. That lack of transparency opens the program to fraud, critics say, and workers are left with little recourse if they feel they’ve been wrongly terminated.

“Congress designed these programs to keep workers employed and yet we still don’t know the identities of the majority of PPP loan recipients nor do we have any verification of jobs retained by loan recipients,” said Julie Farb, an AFL-CIO spokesperson.

These are just a few of the criticisms leveled at the program, part of the $2 trillion Coronavirus Aid, Relief, and Economic Security (CARES) Act, passed by Congress and signed into law by President on March 27. The program was a response to pleas for assistance from small businesses and workers, struggling during the global coronavirus pandemic.

“When we heard that they had the financial help from the government, we thought that maybe we would be going back soon,” said Oscar Melara, a worker who was furloughed in March from the Luxe Rodeo Drive Hotel in Los Angeles. Melara worked in the kitchen of the hotel, which has closed permanently, Aron Harkham, a spokesperson for the hotel, confirmed.

Luxe Hospitality Company LLC received a loan valued between $150,000 and $350,000, according to a Bloomberg Law analysis of PPP data. The direct employer of the workers at the Luxe Rodeo Drive Hotel, 360 N. Rodeo Drive LP, also received a loan—valued between $350,000 and $1 million. Harkham confirmed that the two businesses are distinct, and both received funds “on the low end of the range provided.”

“The funds allowed us to continue contributing towards our employees’ healthcare while on furlough and the hotel was closed, and for that we are grateful,” Harkham said. “To the extent that PPP funds were received, they were allocated in accordance with the Treasury guidelines.” 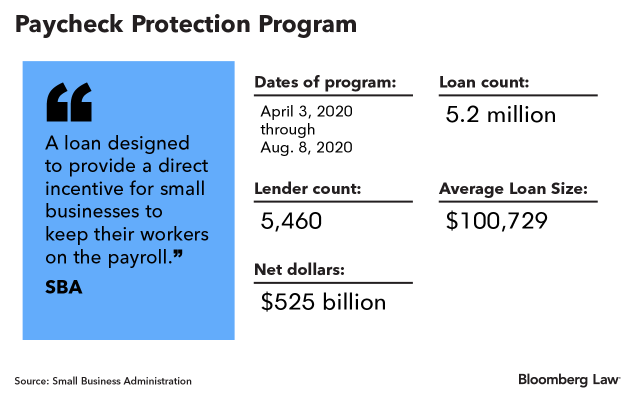 The government intended for the program to “provide relief to America’s small businesses expeditiously,” mandating that 75% of the loan’s proceeds be used for payroll.

More than 5.2 million loans were distributed as of Aug. 8, when the program closed, worth more than $525 billion, according to the Small Business Administration, the agency overseeing the program. Small businesses are filing for loan forgiveness now.

Businesses are calling for another round of aid, but that requires Congressional action. Negotiations between Democratic and Republican lawmakers, as well as the White House, over a new coronavirus relief bill are at an impasse.

Built into the Paycheck Protection Program are exceptions businesses can take advantage of if they need to lay off workers to stay afloat during the covered loan period.

If an employer can prove that it won’t be able to return to pre-pandemic levels of business activity because it’s complying with state and federal Covid-19-related guidelines, it can eliminate an appropriate number of workers without triggering a reduction in loan forgiveness, Graham Ryan, a partner with Jones Walker in New Orleans, explained.

According to Proskauer Rose partner Jeffrey Horwitz, an employer must retain the same average number of full-time equivalent employees during the loan period compared to a past reference period to qualify for loan forgiveness.

Unless business is bad as compared to the previous period.

“The timing of PPP did not anticipate the length and depth of the effects on operations,” Horwitz said in an email of businesses he’s seen take PPP assistance and eliminate jobs. “The economy, especially for retailers, hotels, restaurants and the like, is super-stressed. Few businesses can operate in a zero- or limited-revenue environment.”

In addition, employers with a reference period from Jan. 1, 2020, to Feb. 29, 2020, who hired employees during the first week of March, can lay off those new hires and still receive full loan forgiveness. Horwitz added there are a number of other safe harbor provisions that negate the effects of layoffs on loan forgiveness, if certain conditions are met.

The exemptions are “wide enough to drive a truck through,” said researcher Marty Leary of UNITE HERE, a union that primarily represents workers in the hospitality and food service industries. “What’s going to bring jobs back is when people want to fly on airplanes and stay in hotels again. If Congress wants to support laid-off workers, they need to do it directly.”

Most of the responsibility to check how the funds are being used falls on the lenders, said Ann Murray, a partner with Nelson Mullins. She’s helped businesses navigate PPP funds during the pandemic. The lenders certify or approve the loan forgiveness, and then the SBA has a period of time to review the lenders’ approval, she said.

The catch is that the SBA said it will “review all loans in excess of $2 million, in addition to other loans as appropriate.” That means countless other loans won’t be automatically reviewed by the government, according to May 15 guidance from the agency.

“The PPP and the other small business provisions under the CARES Act have been an historic lifeline to millions of small businesses and tens of millions of American workers,” said Sen. (R-Fla.), chairman of the Senate Committee on Small Business and Entrepreneurship and the sponsor of the Paycheck Protection Program Extension Act, in an email defending the program.

Possible fraud in the program has also been raised as an issue.

Rubio recently wrote a letter to Chairman and CEO of Jamie Dimon expressing concern about the potential misuse of PPP funds by the firm’s employees.

“Both the PPP and expanded EIDL programs were intended to provide critical economic assistance to small businesses during this time of enormous need. Financial institutions, like yours, are on the frontlines of providing PPP assistance,” he wrote in the letter. “Allegations that employees of financial institutions have exploited either the PPP or EIDL programs for their own gain must be investigated fully.” The Economic Injury Disaster Loan, or EIDL, is another relief program available to businesses temporarily struggling during the coronavirus pandemic.

If businesses falsely certify that they properly laid off employees during the covered loan period, and if the government or a worker finds out, the business could face False Claims Act liability. But it’s challenging, at best, for a worker to find out if an employer is filing for loan forgiveness, given the paucity of data made publicly available.

Understanding how an employer uses a loan is “virtually impossible” for workers, said UNITE HERE Local 11 Co-President Kurt Petersen. “Moreover, their focus is trying to get through the next day.”

An employee could sue a business under the FCA, alleging the funds weren’t used for a PPP-appropriate purpose while the employer knowingly filed for loan forgiveness, Nick Klenow, an associate with Selendy & Gay said.

“It’s also worth noting that the FCA has protections for whistleblowers who raise potential FCA liability with their employers,” he said in an email. “That could be another source of liability for businesses who retaliate against employees who raise these issues.”

Murray, of Nelson Mullins, said a worker also could file a complaint with the SBA, or perhaps with the lender itself. To bring these claims, however, an employee needs information—and very little is available.

UNITE HERE has tried to learn how one hotel in Southern California used its money, with little success. “We don’t have any way to compel the owners to tell us what they’re doing with the money,” Leary said.

Ultimately, the hope was that that the program would act as a bridge that would allow workers to keep their jobs until the economy recovered. That hasn’t always happened.

“At the end of the day, while the stated goal of the program was to keep employees employed, the length and magnitude of the crisis made that impossible, although in some cases it did help keep employees on for some period of time,” said Proskauer Rose partner Yuval Tal, who consults corporate clients.