Labor Secretary asked a Senate Appropriations subcommittee for funding to double the number of occupational safety inspectors by the end of President ‘s current four-year term and staff up the wage-hour investigators who scrutinize employer payroll records.

“The Department of Labor is down about 3,000 employees from where it was four years ago,” Walsh said, testifying before the panel in control of his agency’s purse strings. “If we don’t have the staff and we don’t have the employees to protect the workers, then we can’t be on the job sites, we can’t be checking wage-and-hour, we can’t be making sure people are working in safe conditions.”

Without providing specific numbers, the labor secretary said his department is already hiring more enforcement personnel by using $200 million Congress authorized for the DOL’s worker-protection agencies in the American Rescue Plan, signed in March. But the additional funding is necessary, he explained, to grow his agency’s staffing presence beyond where it was four years ago.

The administration’s proposal for a 14% hike to overall Labor Department funding for fiscal year 2022, bringing it to $14.2 billion, must undergo negotiations in both chambers of Congress. The House Appropriations labor subcommittee earlier this week released a draft spending bill that would exceed the president’s request for DOL by about $400 million.

It remains to be seen whether Congress will cooperate with Walsh’s goals for personnel and hiring, particularly with Democrats holding narrow majorities in both chambers. But in a positive sign for the administration, the secretary received only mild pushback from Republican senators Wednesday on his plans to offset DOL attrition.

While the panel’s Democratic chair, Sen. (Wash.) highlighted the calls for more enforcement staffing dollars as a sign to workers that “President Biden is fighting for you,” her GOP counterparts were more skeptical but not overly combative in their questioning of Walsh.

Republicans present at the hearing didn’t focus much on enforcement dollars, but instead pressed Walsh to justify whether increased investment in his agency’s workforce and other agenda items wouldn’t be better directed elsewhere.

“Explain to me why the American people would be better off giving you $1.7 billion than taking that $1.7 billion and spending it on infrastructure,” said Sen. (R-La.), referring to the amount in excess of the current fiscal year DOL budget that the White House is now requesting. 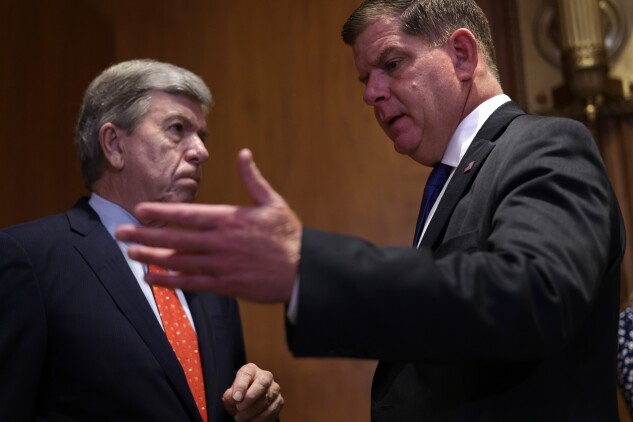 Sen. (R-Ind.) asked Walsh whether there’s been an uptick in Occupational Safety and Health Administration complaints to warrant the $73 million rise in OSHA spending the administration envisions for the coming fiscal year, which begins Oct. 1.

“We’re seeing increased potential problems and we have fewer people to go out and investigate those problems,” Walsh replied. “So we have a lot of cases that are going kind of, I guess, unchecked, if you will.”

Republican lawmakers such as Braun who have roots in the business community often contend that overzealous enforcement can cripple small employers. Walsh tried to downplay the notion that increased funding would finance “gotcha” tactics during safety inspections.

“I would like to get OSHA back to where we’re doing a lot more collaboration of working with businesses to make sure we’re creating safe worksites across America, rather than having to respond to a tragedy,” Walsh said. “And we’re not there yet. The increase that we’re looking for is to build back the OSHA department, build back the Department of Labor to pre-the-last-five-years.”

The Senate’s consideration of DOL spending comes as the House Appropriations Committee is hashing out its fiscal 2022 labor proposal, in which Democrats are seeking $2.1 billion for worker-protection agencies, including OSHA; that’s a proposed increase of $305 million above current levels and $1 million more than the administration has requested.