Two companies that opposed an Obama-era proposal to expand overtime pay requirements have become the unlikely poster children for reviving the rule.

A federal judge halted the regulation in 2016, saying the Labor Department went overboard by doubling the salary level under which workers would be automatically eligible for overtime pay. By then, and White Castle Management Co. had already given some midlevel managers raises to keep them exempt from overtime-eligibility. They decided to keep those raises in place.

“We weren’t necessarily in agreement with where the final rule came in, but we did go ahead and honor it,” Jamie Richardson, White Castle’s vice president for government relations, said of the Obama proposal. “The uncertainty about the rule put us in a position where we said, ‘Let’s lean toward doing the right thing, and if we make that commitment, let’s not punish people by whipsawing them back.’”

Now, as the Trump administration puts the finishing touches on its own overtime proposal, worker advocates say the raises show employers can handle updated salary requirements near the Obama level. They’re also pointing to similar announcements from CKE Restaurants, and others that said they planned to give workers raises in advance of the Obama rule.

“Businesses often claim they can’t handle it when there are proposals to update labor standards,” Heidi Shierholz, an economist at the Economic Policy Institute, told Bloomberg Law. “It’s no surprise that these companies showed they could absorb the costs of the overtime rule.”

Corporate advocates counter that what’s good for some large businesses may not be workable for the wide range of employers covered by federal wage-and-hour law.

That’s Richardson’s take. “One size doesn’t fit all in something like this,” he said. “Those few that chose to make adjustments were able to make it work short term. Others have to make their own decisions based on their unique business models.”

The new overtime proposal could be unveiled as soon as January. 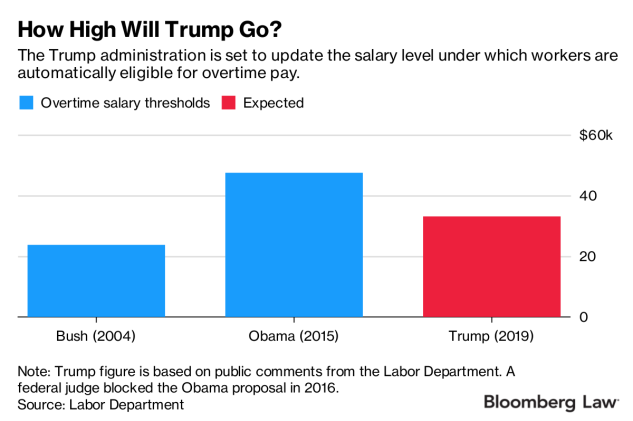 The EPI, whose board includes a number of labor union leaders, and the National Employment Law Project are among the groups that want want the Labor Department to stick with the $47,500 annual salary level proposed by the Obama administration. The rule was expected to make some 4 million workers newly eligible for overtime pay.

They say the Walmart and White Castle examples show that businesses have a number of options for complying with that kind of change, including by raising salaries, limiting hours, or paying overtime.

Walmart ticked up salaries—from about $45,000 to more than $48,000—for an unspecified number of managers to make them exempt from overtime pay requirements, spokesman Randy Hargrove told Bloomberg Law. Hargrove declined to comment on why the company decided to keep those pay hikes in place after the Obama rule stalled or how the company might respond to a new proposal from the Trump administration.

But small businesses, nonprofits, and universities are likely to once again be the face of the opposition to sizable salary threshold hikes.

“Unlike for-profit businesses, YMCAs cannot offset labor costs by raising prices,” Jannel Hill, human resources director for the YMCA in Pawtucket, R.I., told Labor Department officials at a September public listening session in Providence. If the department sets the salary threshold too high, the organization will be forced to cut staff or cut back on community services, Hill said.

It’s unclear whether other businesses that said they would raise certain pay rates in advance of the Obama rule left those increases in place after the regulation was blocked. Among that group, Staples and CKE Restaurants—the owner of Hardee’s and Carl’s Jr.—declined Bloomberg Law’s request for comment. Representatives for and Bob Evans didn’t respond to Bloomberg Law’s request for comment.

—which owns TJ Maxx retail clothing stores—said the company began complying with the Obama rule in November 2016 and has continued to do so, but it declined to say whether that was by raising managers’ salaries.

The Obama overtime rule was meant to put more money in workers’ pockets, proponents say. It was also a response to congressional gridlock that’s watered down the federal minimum wage by not keeping up with inflation for more than a decade.

Critics say the rule would force businesses to shed jobs in the face of skyrocketing payroll costs, as would proposals to hike the minimum wage.

“For companies that are trying to build up managers, this was really going to make it harder to get people in at the ground level as a manager,” Karen Harned, a lawyer for the National Federation of Independent Business, told Bloomberg Law. “Many businesses just can’t pay” above the Obama rule threshold, she said.

A federal judge in Texas in 2017, after freezing it a year earlier. The court sided with the U.S. Chamber of Commerce and other groups, finding that the DOL focused too heavily on salaries instead of job duties. That left the salary threshold for automatic overtime eligibility at $23,500.

The Trump administration is widely expected to raise the threshold to somewhere in the low $30,000 range. Business advocates are already saying companies have to slash jobs if the Labor Department goes anywhere near the Obama threshold. They may consider another lawsuit if they don’t like what they see.

David Weil, who ran the Labor Department’s Wage and Hour Division in the Obama administration, says those concerns are overblown. “The Walmart story says employers can do this,” he told Bloomberg Law. “These companies did the right thing and didn’t collapse after doing it.”

That makes Walmart an unexpected ally of sorts for the worker advocates that have targeted it for years by pushing for higher wages and better workers’ rights.

The EPI’s Shierholz said she’s skeptical about whether Walmart will continue to raise managers’ pay to account for inflation or simply allow the raises to erode as the cost of living rises. The company declined to comment on future pay decisions.

Some business representatives are urging the DOL to make a more moderate update to the salary threshold. Others, like the National Federation of independent Businesses, say the threshold should stay where it is.

Harned, who runs the NFIB’s small business legal center, said any increase wouldn’t account for cost-of-living differences across the country. She also pointed to a portion of the court decision blocking the Obama rule in which the judge seemed to question whether Congress gave the DOL the authority to consider pay rates to determine overtime eligibility.

“We’re really questioning whether the statute gives them authority to do this,” Harned told Bloomberg Law.