Artificial intelligence tools can draft contracts, write answers to legal complaints, or answer simple questions. They may not replace a lawyer’s to-do list, but they could save time.

Walmart and Nationwide Insurance are among the companies experimenting with how artificial intelligence tools can streamline their in-house legal departments and their work with outside counsel, and save money in the process. The use of more advanced data tools also is a growing cost-saving trend. That ultimately could drive law firms to change their thinking.

Walmart, for example, is looking for law firms that align with their legal and business goals, Tariq Abdullah, senior director of legal operations for the multinational retailer said. That includes technological innovation. “What we say is come be part of it,” he said.

The companies also are managing how to get their legal teams on board with changes that can be touchy cultural shift for some.

The idea is to reduce time-consuming but low-level work for outside attorneys, Bryan said. “We’re not trying to take work away, we’re trying to give you more time.”

Larger corporations such as Walmart show the potential of automation in streamlining repetitive legal tasks. The company has focused its efforts on the personal injury and employment litigation it sees in every state, Bryan said.

About 60 percent of the cases against Walmart over the past five years related to personal injury while nearly 15 percent were employment related, according to data from Bloomberg Law. 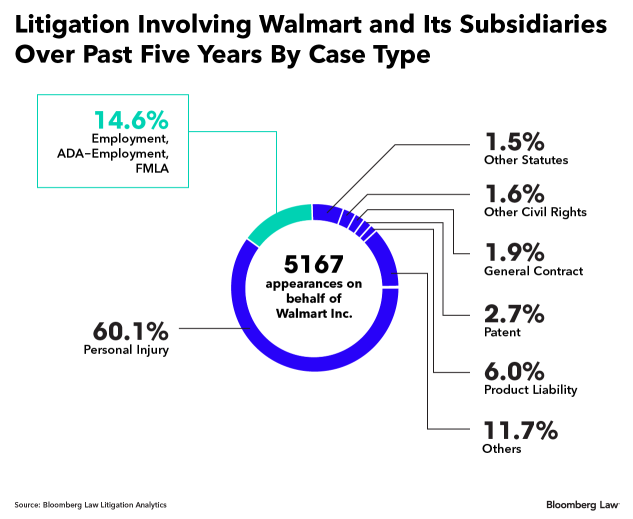 The allegations often are redundant, Bryan said. His department wants to eliminate “cut-and-paste” work at the start of litigation to free up attorneys for more strategic jobs.

That’s where a tool called LegalMation could come in. The artificial intelligence product can read a complaint and hone in on the key allegations, CEO and co-founder James Lee told a group of corporate legal executives and law firms at the annual institute of the Corporate Legal Operations Consortium, or CLOC, in Las Vegas the week of April 23.

LegalMation then prepares draft answers with defenses that a lawyer can review before finalizing, shaving off the time attorneys have to spend on a case.

Walmart uses the tool in-house before it assigns a case to an outside firm. “We’re just making this part of their initial assignment,” Bryan said.

Nationwide Insurance is looking at chatbots for human resources responses and an interactive contract build system, company IT executive Tom Paider said at a CLOC panel. It comes from an experimental mindset, he said.

“Some of the things you just have to explore,” he said.

Getting people on board with changes to how technology such as chatbots operates can be difficult, particularly in legal groups, Paider said. An influential member of the legal team can help to promote the vision, he said.

“It’s almost as much a cultural change as a technological change,” Paider said.

“It’s an augmentation, not a replacement,” Abdullah said.

But such tools will change the business model for outside law firms, Lee said. Firms will have to consider how to maintain revenue in a changing industry.