The U.S. Labor Department’s Wage and Hour Division will have 100 new investigator openings in the coming weeks in an effort to beef up ranks that have fallen to their lowest level in more than a decade.

The move to boost staffing comes after the agency said in January it had reached a pact with the National Labor Relations Board to collaborate on investigations and share information on potential violations of law, specifically targeting independent contractor misclassification and retaliation against workers.

Together, the efforts are some of the first evidence of a shift in enforcement posture at the wage and hour arm, which polices joint employer and independent contractor relationships under the Fair Labor Standards Act—some of the most contentious issues in the employment landscape.

Acting Wage and Hour Administrator Jessica Looman confirmed the openings would be announced soon and that “staffing numbers are near historic lows,” she said in an email.

While the new effort “is a step in the right direction,” Looman added that the agency anticipates “significantly more hiring activity” later this fiscal year.

“That will depend on appropriations, of course,” she said, “but we are optimistic about our ability to build out our enforcement staff and bring a qualified, diverse, and talented team onboard in 2022.” 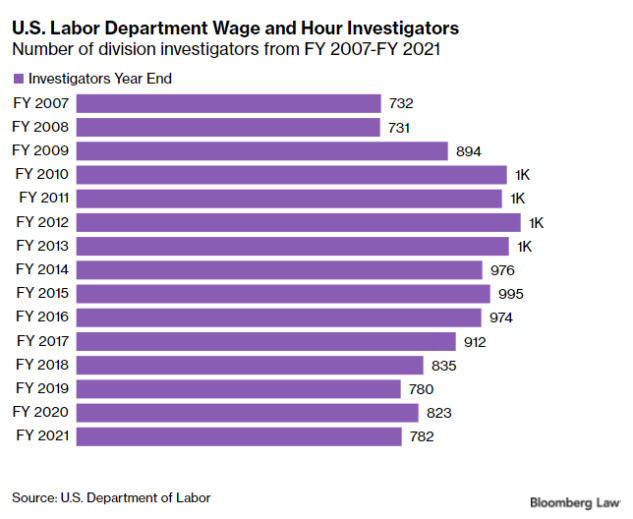 The department is expected to take a tougher approach to joint employer and misclassification issues, especially under President Joe Biden’s pick to lead the Wage and Hour Division, David Weil, who is one Senate vote away from confirmation.

The WHD also is bracing for an influx of enforcement demands under the hundreds of federally funded infrastructure projects created as part of the bipartisan Infrastructure Investment and Jobs Act. The agency is responsible for enforcing prevailing wage requirements.

The low number of investigators likely is behind a dip in enforcement recovery numbers reported by the Biden administration in its first year.

The Wage and Hour Division recovered just $234.3 million in back wages in fiscal 2021, according to data on the agency’s website, a decline of $23.5 million from 2020, when enforcement was more difficult because companies and agency field offices were shuttered under pandemic restrictions.

Catherine Ruckelshaus, general counsel at the worker advocacy group National Employment Law Project, cautioned that the division’s enforcement success shouldn’t be measured by how much back pay is collected, or even in how many cases it handles.

“It is easy to get high numbers if you are going after employers that pay more money, or employees that are underpaid,” but workers are actually earning relatively higher wages, Ruckelshaus said in a phone interview. “So it’s hard to look at raw numbers without understanding what the cases were and what the enforcement actions were.”

Ruckelshaus noted that the Wage and Hour Division also targets lower-wage industries. Even if there are wage infractions, “the recoveries are by their nature going to be lower because the industries themselves pay low wages,” she explained. “So I think it’s a mistake to just look at dollars collected.”

The decline in wage and hour recoveries also came about because of low funding and staffing during the Trump administration, said Margaret Poydock, a policy analyst and government affairs specialist at the left-leaning Economic Policy Institute.

The number of investigators on staff at the WHD declined by nearly 16% from fiscal 2016 to fiscal 2020, the last full fiscal year of the Trump administration, DOL staffing data shows.

The agency will be focused on changing the law instead of enforcing it under Weil, who led the department during the Obama administration, some of his critics say.

“Weil won’t focus on clear violations of the law and getting money owed to the most vulnerable,” Michael Layman, vice president of federal government relations for the International Franchise Association, said in a statement. “His focus will be on ideological efforts to take away small business livelihoods from franchisees and other independent contractors.”

Others are bracing for much broader enforcement if Weil takes the helm at the WHD.

The enforcement numbers from last year are a “good indication that this labor market is such that employers can’t really take advantage of their workers if they want to be able to keep them and they want to be able to attract the workers they need,” Rachel Greszler, a labor research fellow at the Heritage Foundation, said in an interview.

“I think a lot of what will happen going forward will depend on whether or not David Weil is confirmed,” Greszler said. “We have an indication of what their agenda will be . . . I think enforcement is going to go up.”

To contact the reporter on this story: at rrainey@bloombergindustry.com