More than $88,000 has been spent on advertising related to the unionization bid in the past month at a Volkswagen plant in Chattanooga, Tenn.
Photographer: Bill Pugliano/Getty Images

A campaign to unionize 1,700 workers at ‘s Chattanooga, Tenn., production facility is spilling over into the broader community and rehashing old debates on the benefits and risks of joining a union.

More than $103,000 has been spent on advertising related to the unionization bid in the past month, according to a Bloomberg Law analysis of contracts and invoices filed with the Federal Communications Commission.

The climbing ad costs provide a window into the impact the organizing campaign is having on the broader community. The fierce battle for public perceptions suggests that the campaign to organize Volkswagen workers is about changing deeply rooted views on unions in the South, not just organizing a single plant.

An election is scheduled for June 12, 13, and 14, when workers will decide whether to join the United Auto Workers—a Michigan-based labor union representing about 400,000 workers in the U.S. The Chattanooga plant is Volkwagen’s only nonunionized production facility. If workers unionize, it could embolden labor organizers and trigger other elections in the union-adverse South.

The actual amount of money spent on advertising is likely much higher than $103,000, as the FCC documents only reveal television and radio advertising. Money also has been spent on online ads, social media promotions, billboards, and newspaper ads.

Most television and radio ad buys have been by the UAW and the Center for VW Facts, a pro-UAW advocacy group. But anti-union group Southern Momentum also has spent thousands of dollars.

Ad campaigns like the one in Chattanooga are meant to influence community perception and increase the sense of importance around the vote, said Makana Chock, a Syracuse University associate communications professor. An increased sense of importance leads to higher turnout, she said.

“Voting decisions like this are rarely made in isolation,” Chock said. “People consult their friends, they consult their family members, they talk to people who they trust and who they think are informed.” 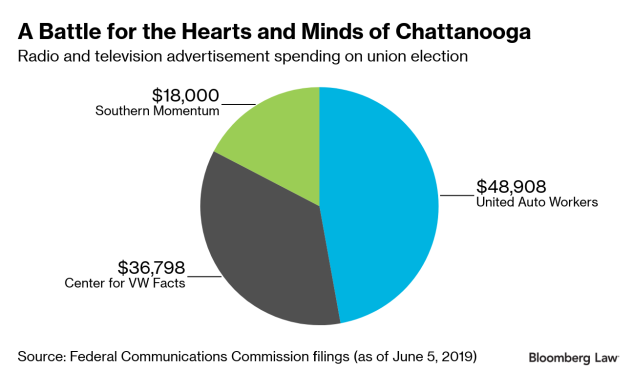 Outside Infiltrator or Worker Advocate?

The ads blanketing the Chattanoogan airwaves are at odds over what the election means.

Southern Momentum and opponents of the unionizing paint the UAW as an “out-of-state union” with “broken promises and lost jobs.”

The UAW and the Center for VW Facts are trying to convince the community that “it’s time for a change” where workers have more say over their schedules and more respect in the workplace.

Maury Nicely, a Chattanooga-based attorney representing Southern Momentum, said that the group’s existence and ad campaign are meant to balance the information flow around the union effort.

“I think it was important to our people that their voice be heard, particularly as the ads from the UAW began and continued to attack Volkswagen itself,” Nicely said.

The UAW said that its ads are meant to empower the town’s employees.

The UAW is predominantly funded through union dues, but it’s unclear where Southern Momentum and the Center for VW Facts are getting advertising money.

Southern Momentum, which describes itself as “a grassroots group” of anti-UAW Volkswagen workers, has spent at least $18,000 on television and radio ad buys. It’s unknown who funded the ads.

Nicely said he wasn’t interested in discussing specific sources of funding. He said that “all of the money funding these workers is coming from inside our community,” adding local businesses are interested in Southern Momentum’s efforts.

The group bought its ads through Louisiana-based Magnolia Media, which lists Laura Lancaster as its sole officer in state business records. Lancaster didn’t respond to a request for comment.

Magnolia Media was the subject of a 2010 Federal Election Commission complaint alleging that the company was a shell entity meant to blur the lines of communication between a nonprofit organization opposed to the Affordable Care Act and a U.S. congressional candidate in New Hampshire.

Lancaster’s previous company, Media Advantage, was paid millions of dollars by a Republican super PAC supporting Newt Gingrich’s candidacy. Media reports from 2012 suggest that the company was a shell entity meant to distance candidates and super PACs that support them.

Nicely wouldn’t comment on the use of Magnolia Media to buy Southern Momentum’s ads.

The Center for VW Facts, which has spent more than $36,000 on television and radio ads, also has unclear funding sources. A UAW spokesman said the union isn’t funding the group and wasn’t aware of its launch. DiSano Strategies, a political PR firm in Michigan, is listed in FCC documents as being behind the group.

The Center for VW Facts didn’t respond to requests for an interview.

Both the Center for VW Facts and the UAW bought ads through entities located at the same Washington address.

The warring Chattanooga advertisements are being heard and seen in a part of the U.S. that has relatively little exposure to unions. 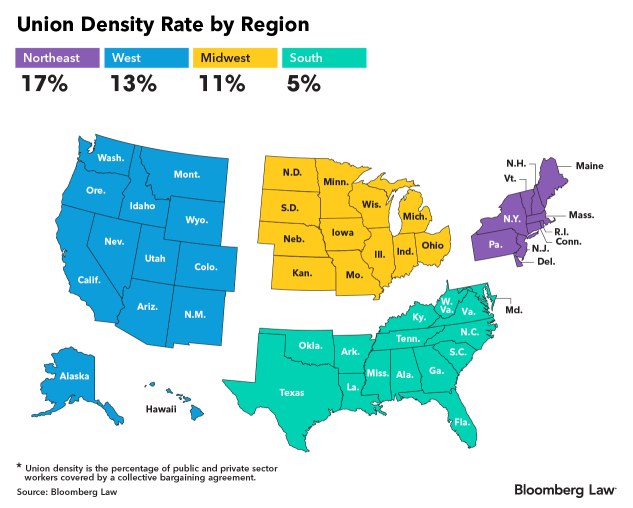 The South lacks significant union representation in part because politicians see low union density as a selling point for attracting business. When the UAW tried to organize the Chattanooga Volkswagen plant in 2014, Sen. (R-Tenn.) said the company assured him the facility would be awarded more work if workers voted not to unionize. The UAW narrowly lost that election.

Tennessee Gov. Bill Lee (R) told workers during a visit to Volkswagen that they were fortunate to be in a state “that has the work environment that we have.” Leaked audio of the meeting was published by Labor Notes.

Sen. (R-Tenn.) came out against the plant unionizing in a tweet last month.

For now, the ads may be provoking annoyance more than a change of heart on union opinions.

“You continuously are badgered every day,” one Volkswagen worker said in a Southern Momentum-produced video. “You can’t even pump gas anymore without hearing the commercials. Just back off.”