Career officials at the U.S. Department of Labor drafted an emergency rule last spring to impede the spread of Covid-19 in the workplace, but it was scuttled by Trump appointees—a previously undisclosed development that sheds new light on the Biden administration’s delay in releasing a similar regulation.

As the scope of the public health crisis came into focus during the pandemic’s initial weeks, officials at the Occupational Safety and Health Administration raced to write an emergency temporary standard aimed at preventing workplace exposure, according to two former DOL officials with direct knowledge.

By April 2020, at least three senior Trump administration officials—Loren Sweatt, head of OSHA at the time; Patrick Pizzella, the deputy labor secretary; and Eugene Scalia, the labor secretary—had seen the draft or were briefed on its contents, the sources said. The three political appointees, who have since left DOL, all rejected the idea, contending that it would have been ineffective and cumbersome for businesses, the sources said.

The existence of the draft, which hasn’t been previously reported, reveals OSHA wasn’t starting from scratch when President took office and ordered the agency to consider issuing an emergency standard for Covid-19. The Biden-led DOL has since missed the president’s March 15 deadline for release of a proposal, and agency leaders have yet to say publicly that they’ve determined an emergency standard is needed.

While it’s unclear what, if anything, Biden’s OSHA leaders may have incorporated from the 2020 draft, the administration is taking a cautious approach toward fulfilling one of the top pandemic requests from labor unions and worker advocates.

Agency leaders previously told industry groups that OSHA had decided to issue an emergency rule and that it would be sent to the White House’s regulatory office for review on March 12. Yet the website of the White House Office of Information and Regulatory Affairs still doesn’t show that a proposal is under formal review.

White House Press Secretary Jen Psaki said March 15 that OSHA “should have the time to get it right.” Media representatives for the agency declined to comment when asked about the status of the rulemaking and whether the 2020 draft contributed to the ongoing effort.

In the weeks leading up to Biden’s deadline, the agency took steps to solicit input from business and other interest groups, in an apparent effort to minimize criticism and potential for legal blowback. But the continued delay risks alienating workers amid an uneven rollout of vaccinations, as public health officials warn anew about a resurgence of cases in some regions.

“Every day it takes, there is more of a chance for infections and more deaths from Covid,” said Mike Wright, director of health, safety, and environment for the United Steelworkers in Pittsburgh.

OSHA’s 2020 draft rule was in an early stage when Trump DOL leaders were briefed on it, according to the two former DOL officials, who spoke on condition of anonymity to relay internal discussions. One of them said OSHA officials prepared the draft in case Congress ordered the agency to issue an emergency standard in a week or less, though that never happened.

The other ex-official questioned why the Biden administration had yet to release an emergency standard, saying there already was a policy framework before the beginning of the presidential transition. 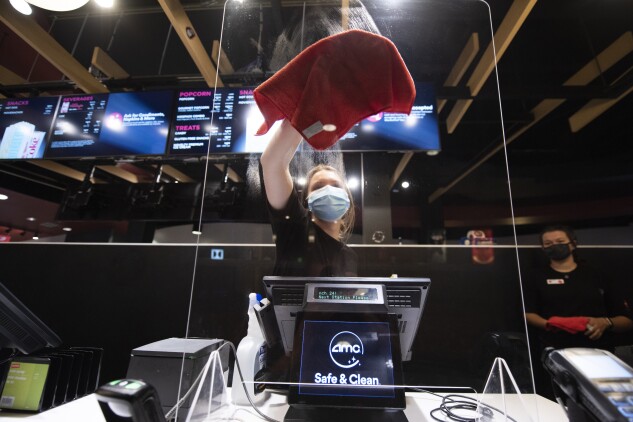 A worker at an AMC Theatres location in Highlands Ranch, Colo., cleans a plexiglass shield at a ticket counter in August.
Photographer: Tom Cooper/Getty Images

Beyond the 2020 draft, the Obama administration had written a draft rule to protect health-care workers from airborne transmissible diseases. Though that effort stalled in 2015, some workplace safety advocates have said that rule also could be used as a backbone for a Covid-19 standard.

OSHA career staff seemed eager to issue an emergency rule last spring, seeing the pandemic as a historic moment for workplace safety, one of the former officials said. While Trump DOL officials never discussed the 2020 draft publicly, they rejected calls for an emergency temporary standard generally.

Scalia, a veteran business attorney before joining the Trump administration, argued DOL already had the authority to enforce unsafe workplace conditions amid a pandemic. And Sweatt said in an interview last year that a Covid-19 rule wasn’t needed.

Scalia and his allies believed it made little sense to issue an emergency standard when not much was definitively known about the disease. Indeed, the draft rule changed several times as more was learned about the virus, one of the former DOL officials said.

The AFL-CIO labor federation sued DOL in May, asking a federal court to force the agency to issue an emergency standard. The request was later denied.

‘Not Just the Timing’

And outreach continued after Inauguration Day. OSHA hosted a February listening session for dozens of business lobby representatives. Each participant got several minutes of speaking time to air concerns and recommendations about Biden’s order for the agency to consider an emergency rule, according to two people involved in the call.

A similar session was held for unions and worker advocates the same week, said another source with knowledge of the event. DOL representatives didn’t reveal details of rulemaking plans during these discussions, the sources said.

The department wasn’t required by law to consider public input because potential action would come in the form of an emergency rule, but some business advocates voiced frustration that they weren’t permitted to submit more substantive written comments.

One of the former DOL officials said the 2020 draft could have served as a “foundation” for the Biden administration, but it would have needed major revisions to account for changes in guidance from the Centers for Disease Control and Prevention.

Some union leaders say they’re willing to wait for a short period, if the delay means Biden’s OSHA will release an emergency standard that incorporates the latest scientific knowledge and is bolstered to withstand expected legal challenges.

Zinn said his group wants the rule to address reuse of N95 respirators, which were designed for a single use but authorized for multiple uses by the CDC.

Zinn and the Steelworkers’ Wright both said they hope the rule addresses the aerosol spread of the virus, as minute particles that can cross entire workspaces, rather than merely repeating current guidance about the need for workers to stay six feet apart.

While the rise in vaccinations has raised hope that the pandemic could soon be under control, other advocates warn that workplace transmission remains a threat and that important questions remain about how a rule would be enforced.

“Not everyone has been vaccinated, not everyone will be vaccinated,” she added. “There is absolutely no reason to let down our guard.”