The coronavirus crisis is proving a test case for contrasting social models, as governments in the U.S. and Europe pursue different policies to cushion their economies from much the same shock.

It’s the latest revival of a longstanding philosophical debate -- and at its center is the question of who should absorb the costs and risks when there’s a sudden change in economic fortunes.

On one side, the U.S.‘s traditionally more flexible labor markets mean individual workers are expected to take the brunt. Last week’s stimulus bill included about $300 billion in cash handouts for households –- to support families until the virus clears, even if they lose their jobs in the meantime.

Meantime, in Europe, where states provide more generous unemployment benefits and it’s harder to fire staff, the focus has been on giving companies incentives to keep workers on their books, holding out for business to return to normal as soon as possible. 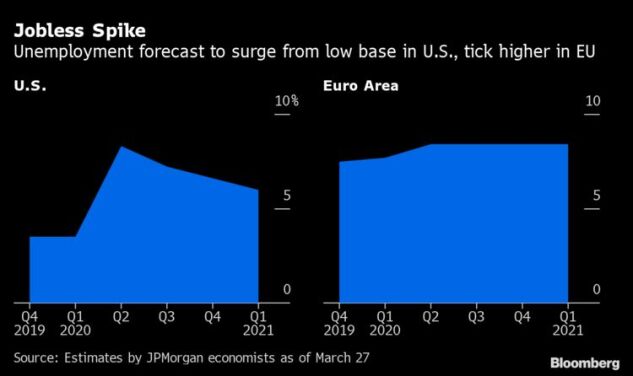 “The starting point for the two systems is very different,” , chief economist at Citigroup Inc., told Bloomberg Television. Europe has “a much better social safety net that will support people. In the U.S., it’s necessary to be supportive of people and supportive of firms.”

In the unfolding transatlantic experiment, the virus’s effects are likely to show up differently in economic data. The U.S. has already seen a in unemployment claims, and policy makers have had to improvise a safety-net.

“In contrast to the systems which have subsidized short-term work programs and heavy costs associated with layoffs, it is likely that the U.S. will experience a larger rise in unemployment rates, even under the best policy design,” said , chief economist at JPMorgan Chase & Co.

That has knock-on effects for households, he said, including a loss of access to health-care -- which in the U.S. is often linked to employment -- and credit.

It’s rare to get a beauty contest between distinct approaches, and economic ideologies, like the one created by the virus.

The 2008 crash wasn’t quite the same: European and U.S. authorities responded differently in part because their banking systems faced specific challenges. But the pandemic is posing the same kind of threat to public health and economic activity across the developed world.

The surge in jobless claims is likely only just begining in the U.S. Many analysts, including some Federal Reserve policy makers, say unemployment rates will hit levels not seen since the Great Depression. After the 2008 crisis, the U.S. already lost a long-held lead over Europe in terms of the share of the prime-age population in work. 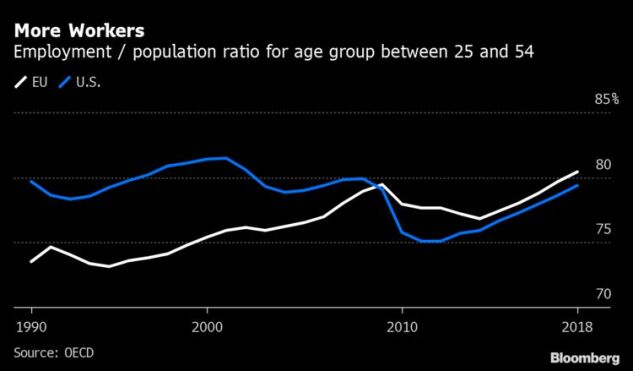 The $2.2 trillion rescue bill adopted by Congress, and signed by President on Friday, is designed more to cushion this blow than to forestall it.

As well as the checks to households, $350 billion is earmarked for credit to small and medium-sized businesses, which employ about half the workforce. These loans can be waived if companies retain staff -– or re-hire people they already laid off. But there are worries that the bureaucracy supposed to administer the plan is ill-equipped for its scale.

In Europe –- where the first data on virus-driven job losses is due this week –- governments have off-the-shelf furlough plans they can resort to. Countries like Germany, France and Italy have responded by making more cash available to these programs, and widening their scope.

Even the U.K., whose work practices have historically followed U.S. lines, announced that the government will cover up to 80% of the wage-bills for private employees who risk losing their jobs. Canada followed suit on Friday with a similar policy.

The idea has attracted attention in the U.S. – and not just among left-leaning admirers of the European model.

The conservative Tax Foundation, for example, praised Germany’s wage-subsidy program last week -- noting that it helped limit job losses after 2008, has been widely emulated since, and is likely to prove effective in the current slump too.

If the virus delivers a sharp but short blow to economies, the European setup is perfectly adapted to dealing with it, according to , a senior fellow at the Washington-based Peterson Institute for International Economics.

It’s “a social model that can essentially freeze the economy for 3 months,” he said. “And tell the vast majority of workers: ‘Just stay home, we’ll pay your firms, so they’ll pay you – and on day one after the lockdown ends, you can go back to work’.”

Problems may soon arise, though.

If the shutdown stretches much beyond three months, Kierkegaard says, even European-style subsidies won’t be able to make up for the hit to corporate cashflows –- and then a “dramatic increase in layoffs” is likely.

Euro-area economies also face another problem the U.S. doesn’t have, and one that could slow their recovery once the health emergency is over, according to Citigroup’s Mann.

Economies will likely need more help from budget spending to get out of the slump, since central banks have little room to deliver stimulus by cutting interest rates. Many analysts even expect fiscal and monetary policy to operate in tandem.

That’s much easier to do in the U.S. compared with the euro area, which has a single central bank but multiple governments in charge of budgets, and spending caps that often require tortuous negotiations. Officials have also clashed over whether to issue debt together via so-called coronabonds.

The lack of fiscal coordination may hobble a European rebound this year, said Mann.

As for the U.S., while the immediate future may look harsh, the pain of job losses may be over sooner than in Europe. Economists are predicting a much faster snapback for the U.S. economy.

“The trajectories and the profiles of the economic part of this will be different,” Mann said. “The prospects for the U.S. is that there will be a deeper downturn in the second quarter. But the deeper you, go the faster you come out.”

To contact the reporter on this story:
in Frankfurt at cstirling1@bloomberg.net