The race for Virginia governor offers a test of whether paid leave policy resonates as a state-level campaign issue in the coronavirus era, with the Democratic candidate embracing the idea at the same time his party in Congress failed to enact a nationwide policy.

Terry McAuliffe, the Democrat seeking a return to the state’s highest office, has made paid leave a frequent talking point and prominent part of his economic plan alongside a $15 minimum wage proposal. His pitch to guarantee workers paid time off provides voters a contrast with Republican Glenn Youngkin, who describes himself in campaign materials as the “pro-business candidate” opposing government mandates on employers.

Paid leave is far from the only divide between the candidates, but McAuliffe’s emphasis has elevated debate over workers’ need for paid time off amid a pandemic that’s heightened public awareness of the issue—and employer pushback against it. McAuliffe’s stance aligns him with President ’s agenda, which included paid family and medical leave, boosting the national overtone of the race.

“Part of the reason paid leave is getting so much attention in the Virginia governor’s race is that it’s been getting so much national attention as well,” said Jennifer Lawless, a professor of politics and public policy at the University of Virginia.

With the federal proposal’s recent removal from Democrats’ broad social spending and tax plan, paid leave is once again a state and municipal policy issue, and a contentious statehouse campaign topic, in Virginia and beyond.

But its demise on Capitol Hill could also hurt McAuliffe by raising doubts among voters about whether Democrats can turn campaign talk into real benefits for workers.

“The issue is: Is it sufficient to drive up turnout among Democrats and Democratic-leaning independents? Maybe,” Lawless said.

Youngkin’s campaign, which didn’t respond to requests for comment, touted his economic plan in an Oct. 28 press release, including proposals “cutting job-killing regulations by 25%.”

“Virginians deserve more than Terry McAuliffe’s recycled plans and failed economic track record,” Youngkin said then. “As the pro-business candidate, I will get Virginians back to work, reinvigorate small businesses, and bring economic growth back to the Commonwealth.”

McAuliffe, who held the governorship from 2014 to 2018, favors guaranteeing workers paid sick time and paid family and medical leave, both of which will require state legislative action, his campaign’s policy director, Nicky Zamostny, said. She added that details will be decided after the election.

“Paid leave has always been a popular issue, but definitely the pandemic has brought a renewed focus and attention to it,” Zamostny said. “It’s something that has really been resonating with Virginia voters.”

Nine states plus the District of Columbia have enacted a paid family and medical leave program, while 14 states and D.C. have enacted paid sick leave requirements. Virginia isn’t among them. Virginia is one of only two states where the governor’s job and state legislative seats are up for election in 2021—the other being New Jersey, where lawmakers already have enacted paid leave laws.

Because of the unusual timing, Virginia’s elections are viewed as a bellwether of what’s to come. In 2022, 36 states will elect their governor and nearly all state legislatures will hold elections, not to mention the races for U.S. House and Senate seats.

The emphasis on paid leave in Virginia “could be a sign of where things are going to go in 2022 as well,” said Jared Leopold, a Democratic communications consultant who represents Virginians for Paid Sick Days. “You haven’t really seen this as a front-and-center issue in a governor’s race before.”

Polls show a tight race between McAuliffe and Youngkin, and Democrats’ 55-45 majority in the Virginia House is considered at risk on election day.

Despite increased voter awareness, enacting a paid leave policy is no sure thing, even if Democrats don’t need Republican support to enact policy—as was the case with the federal spending plan.

Major business groups and Republican officials tend to oppose taxpayer-funded paid family and medical leave as well as government-mandated paid sick days, due to the expense and compliance burdens for employers. 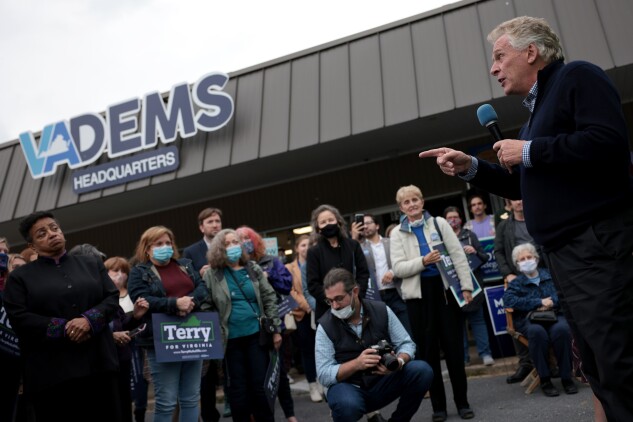 In Virginia, where Democrats already control the governor’s office and the legislature, lawmakers have faced similar disappointment in trying to enact legislation requiring private-sector employers to provide paid sick days to their workers. Paid sick leave proposals failed in 2020, before the state enacted a narrow paid sick leave requirement in February, covering only home health workers.

“We maintain our longstanding position of opposition to mandating paid leave on employers,” Jodi Roth, a lobbyist for the Virginia Retail Federation, told a state House committee in January while testifying against a broader sick leave bill. Retailers that can afford to offer paid sick days already do, she said, adding that “creating a one-size-fits-all mandate is not the answer.”

That issue ended up as a ballot initiative that voters approved in November 2020.

The vote in Colorado, which was the first state to enact paid family and medical leave through a ballot initiative, caught the attention of state policymakers and candidates for office, reinforcing opinion polls showing broad public support for paid leave laws, said Jared Make, vice president at A Better Balance, which advocates for paid leave policy.

“Colorado has shifted some of the debate,” he said, “and it provides a clear message to elected officials that this is such an extremely popular policy.”