The American cities most dependent on tourism are suffering some of the worst labor markets in the coronavirus recession, with almost one-third of workers unemployed in vacation destinations from Hawaii to the east coast.

The jobless rate in Kahului-Wailuku-Lahaina in Hawaii and Atlantic City-Hammonton in New Jersey surpassed 30% in May, the highest in any U.S. metropolitan areas, according to data released Wednesday by the Bureau of Labor Statistics. Las Vegas-Henderson-Paradise in Nevada was close behind.

Meanwhile, Elkhart, Indiana -- known as the recreational vehicle capital of the world -- saw one of the biggest labor-market recoveries in May, as its jobless rate fell back to 11.9% from almost 30%. RV plants have reopened to cater for surging demand, as vacation-seeking Americans shun crowded planes and hotels in favor of a more socially distanced kind of tourism.

“We have seen an incredible rebound and retail demand and dealer demand,” said Michael J. Happe, chief executive of RV-maker Winnebago, in an earnings call last week. , an Elkhart-based RV builder, has seen its stock surge more than 200% from March lows. 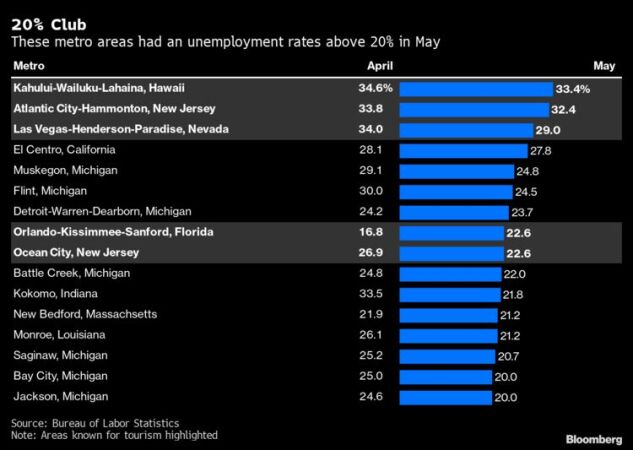 In general, tourist economies that rely on visitors flying in have been hit harder than those where more people come by car, said , senior economist with Wells Fargo & Co. While there are signs of revival in some beach resorts and areas near national parks, “the recent surge in infections may put this rebound at risk,” he said.

Nationwide, unemployment eased to 13.3% in May and is forecast to extend the drop to 12.5% in the June jobs report, due out on Thursday. The BLS said the actual rate was somewhat higher after adjustment for .

To contact the reporters on this story:
in Atlanta at smatthews@bloomberg.net;
in Baltimore at msheehey@bloomberg.net