Logistics companies in industries ranging from trucking to warehouses are warning that President Joe Biden’s vaccine mandate will cause further supply chain backlogs.

Groups representing them say substantial numbers of their employees are unvaccinated, and may quit or be let go at the height of the holiday season. The supply chain is already suffering as a shortage of workers, backlogged ports, and other challenges slow the movement of goods.

Biden announced last month that private-sector companies with 100 or more workers will have to require proof of vaccination or weekly testing, and a final rule is still under review. The administration has also mandated that federal contractors be fully vaccinated by Dec. 8. It’s touting vaccines as the fastest way to end the pandemic and says mandates have proven effective in inducing resistant workers to get the shots.

The transportation groups’ threats put the Biden administration in a bind as it seeks to both curtail the Covid-19 pandemic and ensure the smooth flow of products to customers. The groups are requesting exceptions to the vaccine mandate for key supply chain employees. 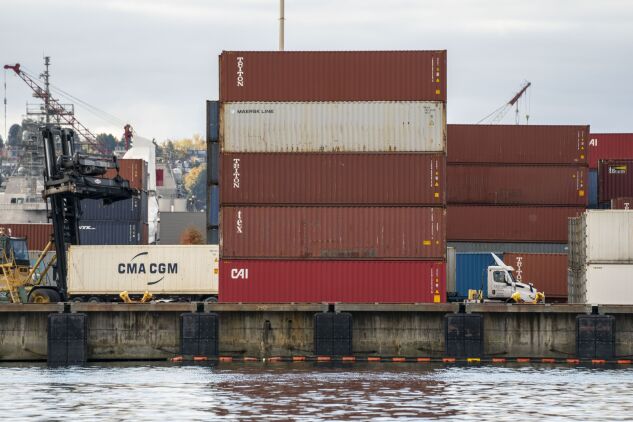 Vaccine requirements could cause trucking companies to lose up to 37% of their drivers to retirements or to smaller carriers that aren’t subject to the rule, the American Trucking Associations has warned.

The vaccine mandate “will create a workforce crisis for our industry and the communities, families and businesses we serve,” Chris Spear, president and CEO of the ATA, wrote in a letter to the White House office crafting the vaccine rule. The trucking group, which wants an exemption or other changes to the rule, met with that office Tuesday.

Marc Freedman, vice president of workplace policy at the U.S. Chamber of Commerce, warned of “the potential for even further disruptions in the supply chain going into the holiday season.” Companies involved in transportation and logistics are particularly concerned, he said.

The mandates could affect workers at points across the supply chain, stakeholders say.

A group representing wholesale and distribution companies warned that thousands of warehouse staff and other mid-supply chain employees may have to stop working.

“Come December, many companies will be unable to keep products moving through their warehouses and distribution centers to satisfy growing consumer demand if forced to terminate these essential workers,” Eric Hoplin, president and CEO of the National Association of Wholesaler-Distributors, wrote in a letter to Biden last week.

Stephen Alterman, president of the Cargo Airline Association, said its members have “significant concerns” with the timeline of the mandates and asked for any deadline to be pushed to 2022 given that they are now in their “peak seasons,” according to a letter first reported by Politico.

The Canadian Trucking Alliance is also looking for an exemption to vaccine mandates at ports of entry, warning that 20% of Canadian truckers and 40% of American truckers would have to stop work, snarling cross-border supply chains.

Republicans have also expressed alarm about how the vaccine mandate could affect the supply chain. Sen. (R-Miss.) wrote to Biden Wednesday, raising the transportation sector’s concerns of “impending disaster.” Rep. (R-Ohio) also warned about delays at ports earlier this month, saying that the administration’s decisions to impose vaccine requirements will “only exacerbate the workforce issues.”

VIDEO: President Biden’s vaccine mandate rule for companies, the likely legal challenges, and what to expect next.

The administration touts the success of vaccine mandates at companies that have implemented them, such as About 59% of United’s workers were vaccinated when it imposed a requirement, but two months later the company reached a rate of about 99%.

said Tuesday that more than 96% of its “active workforce” have been vaccinated, which is 60,000 more than when the company announced in August that all of its U.S. workers would need to get vaccinated by Nov. 1. The union representing Tyson’s workers originally raised concerns about the mandate.

“While there is considerable pushback on employer mandates, most employees want to work in a fully vaccinated workplace,” said Lawrence Gostin, professor of global health law at Georgetown University. “Vaccine mandates are often opposed by a vocal minority, but even those who object eventually get the vaccine.”

White House press secretary Jen Psaki said vaccine-hesitant employees should be offered information, which is the policy for federal employees.

But business concerns have been heightened by the strained supply chain and holiday season. ATA says the average driver vaccination rate was 50% as of September among carriers who replied to its survey.

The group warned the mandate comes at a time when the industry is already facing a shortage of about 80,000 drivers.

“As a result of the already crippling driver shortage, companies in supply chains across the economy are facing higher transportation costs, leading to increased prices for consumers on everything from electronics to food as well as empty shelves in some parts of the country,” Spear said.

With assistance from and Josh Wingrove