Many new members added by the United Automobile Workers union since 2012 have only one tie to automobiles: they drive or ride in them. They’re graduate students, health-care workers and public-sector employees.

Now, with and all announcing they will stop making the conventional sedans that have sustained many UAW members for decades, the union is facing perhaps a more fundamental transition.

It will have to recruit more non-traditional members, alter how it negotiates, beef up skills of the auto workers remaining in its ranks, and break through to organize plants of foreign-based automakers, industry experts told Bloomberg Law.

“They can’t expect to thrive if all they’ve got is domestic production,” Rutgers University labor studies professor Susan Schurman said.

It’s a familiar story for the UAW, which declined a request for an interview while answering some questions by email. 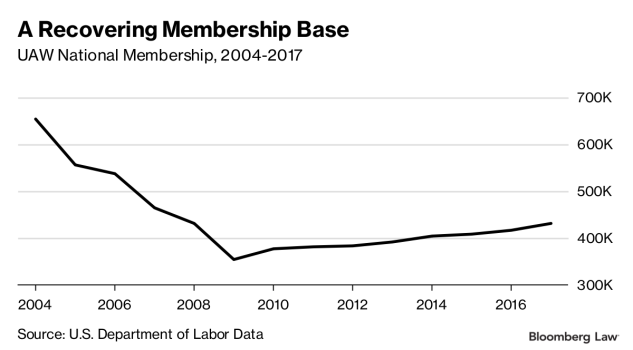 The UAW’s strength faces a major test next year when it enters negotiations with the Big Three. Employee contracts at GM, Ford, and Fiat Chrysler all expire on Sept. 14, 2019.

Automakers will seek union sacrifices in upcoming negotiations largely because automakers want to cut spending to fund investments in electric and automated vehicles, said Kristin Dziczek of the Center for Automotive Research.

GM’s Nov. 26 announcement that it would close five North American plants and cut at least 14,000 workers “set out a marker of we’re going to be talking about maintaining employment levels and maintaining wage and benefit levels and not talking about gains,” Dziczek said. “That doesn’t mean that there may not be some gains somewhere but it does shift the conversation.”

The UAW declined to comment on the impact on negotiations, saying that it does not discuss bargaining strategy positions.

The last round of contract negotiations in 2015 produced wage increase across all three companies and various other gains, including increased 401(k) contributions and holiday time. Those were the first wage increases since the series of contracts negotiated in 2003, Bloomberg Law data shows.

Out With Old Model

“There clearly is a very important basket of skills among those unionized autoworkers that has helped them keep the jobs they have despite much lower labor costs elsewhere,” Estlund told Bloomberg Law Nov. 30. “But the basket of skills needed changes with automation and that’s quite disruptive.”

The UAW has maintained national training centers—funded by Ford, GM, and Fiat Chrysler—since the 1980s. Those training centers have been the subject of recent scandals. But those institutions hold a major opportunity to preemptively educate workers, Rutgers’ Schurman said.

The union enacted changes since the recent corruption scandals and said in a statement to Bloomberg Law that the union “has zero tolerance” for anyone taking money from training programs for personal use.

The UAW is in a period of transition, not a death spiral, Brandeis University professor Joel Cutcher-Gershenfeld told Bloomberg Law Nov. 28.

“It’s less of hard times and more of an underlying shift in the industry itself,” said Cutcher-Gershenfeld, who co-wrote a book on the history of the UAW and Ford.

“If the union were stronger it could force GM,” Hirsch told Bloomberg Law Nov. 30. “Instead of shutting down a plant and moving production, they could pressure them to retrofit the plant to make cars that are selling better.”

Perhaps the biggest challenge for the UAW will be organizing foreign manufacturing facilities in the U.S., Schurman said.

The UAW failed to unionize a Tennessee Volkswagen plant in 2014, settling instead for a “community engagement program” that required VW to meet with UAW three times a month but didn’t include bargaining obligations. The union also lost a bid to unionize Nissan Motor Co. workers in Mississippi in 2017.

The union needs to double down on organizing those plants and coordinate with international trade unions where those companies are based, Schurman said. If they don’t, the UAW will lose even more clout in the auto industry as the Big Three shift production abroad. 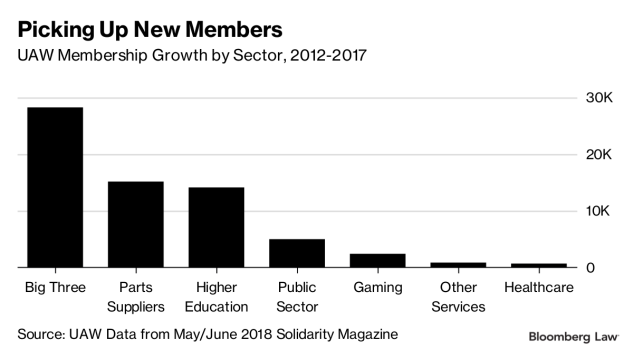 Even with the organizing losses at international automakers, the UAW has regained thousands of members that automakers shed during the Great Recession, when GM and Chrysler declared bankruptcy and received government bailouts. It has successfully organized graduate students at Columbia University, The New School, Boston College, and Harvard University in recent years, making some of the same adjustments in organizing that the United Steelworkers made after numerous U.S. steel mills closed.

“If there’s a union out there that will adapt,’' Schurman said, “I bet my money on the UAW.”