A person holds a sign during a labor and union rights march in New York on March 4, 2015.
Photographer: Spencer Platt/Getty Images

Unions have prevailed in seven of 10 elections to represent private sector workers during 2020 regardless if the votes were cast in person or by mail due to the Covid-19 pandemic, according to a Bloomberg Law analysis of election results.

“Voter turnout has been low so far this year, but that’s understandable, given the logistical challenges brought on by the pandemic,” Bloomberg Law labor and employment analyst Robert Combs said. “What’s surprising is that these challenges haven’t affected one method of voting more than another, in terms of the outcome of the elections.” 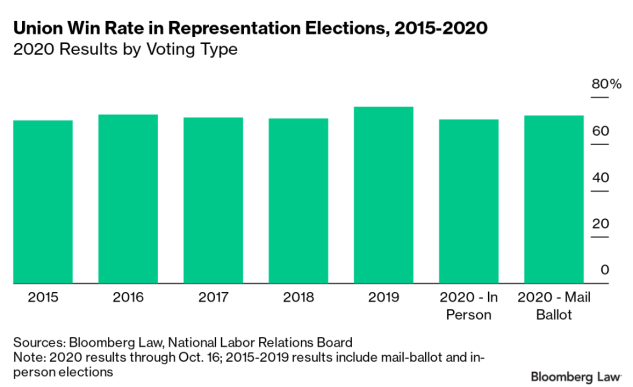 The strikingly similar statistical outcomes for the two voting methods provides new context for the National Labor Relations Board’s recent willingness to indefinitely suspend mail-ballot elections in order to consider employer arguments that they should be held manually.

The Republican-controlled NLRB has halted seven mail-in votes since Aug. 25, while allowing five to move forward, including one election to oust a union. From early May to late August, the board had rejected at least 15 company requests to reconsider regional directors’ orders for mail-ballot elections because of the virus.

The 2020 union election results show that the NLRB shouldn’t stop votes and leave parties waiting to find out how and when workers will cast their ballots, said Maneesh Sharma, the AFL-CIO’s associate general counsel. The statistics suggest that whatever issues about mail-ballot elections that worry the board don’t actually affect outcomes, he said.

But keeping a workplace in limbo amid the tensions that often arise before an election harms workers, unions, and employers, he said.

“Ultimately the worst thing the board can do is indefinitely delay the election,” Sharma said. “There’s a reason the board is supposed to expeditiously resolve these things.”

NLRB spokesman Edwin Egee declined to comment on whether the board considers the statistical similarities between mail and manual elections or the consequences of indefinite delay when it decides whether to halt mail-ballot elections.

“Union organizers may only care about the union win rate, but our concerns about mail in ballots are the opportunity for union pressure tactics and coercion that are greatly expanded by eliminating in-person, NLRB-supervised voting,” Semmens said.

Although the threat of coronavirus transmission may make it prudent to hold certain union elections by mail, the NLRB should seek to conduct elections in-person as soon as it’s safe to do so, said Maxford Nelsen, labor policy director for the Freedom Foundation, a conservative advocacy group.

Despite the NLRB’s newfound skepticism about mail balloting, it remains the overwhelming method of choice for the agency’s regional directors in charge of approving elections during the pandemic.

Regional directors have ordered mail balloting in 39 of the 40 certification and decertification elections that they approved since the board paused its first mail-in vote in late August, according to a Bloomberg Law analysis. In at least six cases, regional directors called for mail voting even when the union agreed with the employer’s preference for manual elections.

Six of the seven mail-ballot elections that the NLRB halted remain pending. Ballots would have been sent out to workers in those contests but for the board’s intervention. The votes would have already been tallied in two of the six pending elections.

Ballots for nurses at Aspirus Keweenaw Hospital to join the Michigan Nurses Association would have been counted on Sept. 14. Votes for drivers at a Perdue Foods feed facility had been set to be counted Oct. 2.

One of the suspended elections moved forward because the union agreed to in-person voting to end the NLRB-imposed delay.

The ballots would have been mailed to workers at ClarkWestern Dietrich Building Systems’ steel frame plant in Connecticut on Sept. 16 and the vote on whether they’d join the United Steelworkers would have been counted Oct. 7. Instead, the workers voted in person on Thursday.