store workers in three states are aiming to organize under separate unions, setting up a possible clash that could complicate the labor campaign against the Silicon Valley titan.

More than 100 workers in Atlanta next month will become the first Apple store in the US to vote on whether to join with the Communications Workers of America, part of a broader effort by the union to organize workers at big tech companies. Another store in Maryland is organizing with the International Association of Machinists, a union with roots in the defense and aerospace industries. And in New York, workers at a Manhattan store are organizing under Workers United—the union that swept Starbucks stores nationwide—hoping that lightning will strike twice.

But some labor advocates privately worry it may prove difficult if individual unions don’t get behind a standard-bearer. Although it’s early, and those involved in the process say it has been harmonious so far, internal competition for the same share of workers could make it harder to win elections and negotiate a first contract with Apple.

“Sometimes we eat each other up, and that has been a problem in the US labor movement for a long time,” said Tefere Gebre, former executive vice president of the AFL-CIO. “It’s an institution versus a movement.

“I’m sure if you asked any of these unions, they’d tell you they’re the one organizing Apple,” he added. 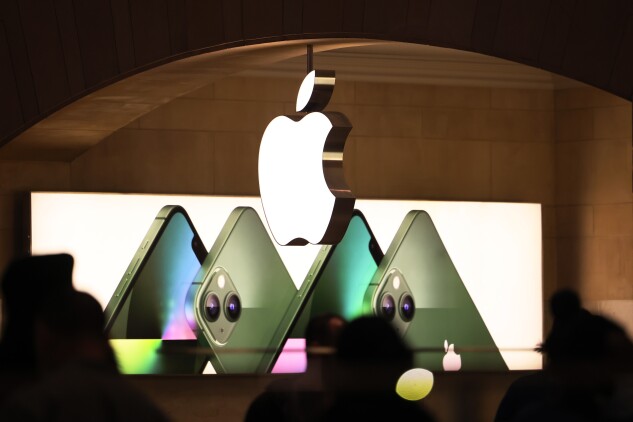 The competition could pose problems down the road. A single workforce split among multiple unions could erode organized labor’s sole source of leverage—unity—making them weaker opponents at the bargaining table.

And in elections, organizers could find themselves with fewer resources to fight dissuasion campaigns from outside firms. Apple has already hired Littler Mendelson, one of the largest management-side firms, to thwart the union in the Atlanta store. CWA has filed two unfair labor practice charges with the National Labor Relations Board over alleged anti-union conduct by the company.

For example, 10,000 John Deere workers went on strike last year for better pay and benefits—an endeavor that may not have been possible if they hadn’t all been organized under the United Auto Workers.

“The only way it works is to have one union,” said Raynor. “I wouldn’t say the threat is great for Apple until one union decides to consolidate this. Unless one union consolidates, in my opinion, there won’t be contracts.”

It’s not unheard of for multiple unions to represent the same pool of workers. For example, the Association of Flight Attendants and the Association of Professional Flight Attendants each have workers at different airlines. CWA and the Teamsters have a joint pact for customer service agents at American Airlines. And the American Postal Workers Union and National Postal Mail Handlers Union also share representation for postal workers.

Labor organizers involved in the Apple effort reject the idea that multiple unions would diminish their influence.

“I honestly don’t feel like there is a conflict,” said Dave DiMaria, an organizer with the Machinists. “I’m against any notion that unions own specific types of workers. I think that’s how the workers see it. They are collaborating across stores and unions as we speak to push back against the company’s attempt to dismantle their efforts.”

In a statement, CWA spokeswoman Beth Allen said it’s up to workers to decide “which union would make the best partner.”

One in particular fits the bill, she said.

“We have helped workers make their voices heard at Google, AT&T, and many of the largest corporations in the United States,” Allen said. “We think CWA is a very good fit for workers at Apple stores because of our commitment to worker-led organizing and our deep experience in tech and telecom and in representing retail workers.”

All unions need member dues, which have been harder to come by each year. Nationally, the percentage of workers belonging to a union hit a record low of 10.3% in 2021. Union members made up just 6.1% of the private sector.

That’s left union leaders looking for new sources of cash—and ways to stay relevant in a technology-based economy. The machinists and many other unions have sought to expand their membership, which they say also helps workers in emerging industries.

“It’s just kind of the nature of how unions work,” DiMaria said. “As opposed to starting a brand new union for every new job that pops into existence, this is a way for working people to have some leverage and pool resources.”

Organizing campaigns often start as informal talks among workers, who usually end up recruiting professional help. Workers at the Maryland Apple store contacted the Machinists because they were familiar with the union’s organizing work in Baltimore, DiMaria said.

The process is often circumstantial. Derrick Bowles, a worker at the Atlanta Apple store, said he simply filled out a form on the AFL-CIO website—the only labor group he knew. He was later contacted by CWA.

Tiawana Dugger, a worker at the Maryland store, said she doesn’t mind other unions organizing other Apple stores as long as workers remain free to collaborate.

“People are entitled to want what they feel is best for them,” she said.